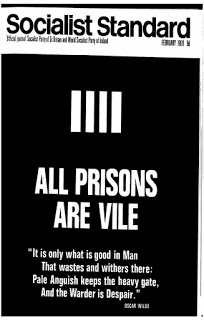 From the February 1969 issue of the Socialist Standard

“It won’t work. You can’t change human nature”. How often has the Socialist heard this objection! It is easy enough to answer because it is a catchphrase whose meaning is unclear and whose implications the objector won’t have thought through.

What, first, might “human nature” be? The usual answer is that human beings are greedy and lazy and are out to get as much as they can with the least possible effort. But this should more accurately be called “human behaviour” and few will say that human behaviour doesn’t change. It is easy to show that throughout history and pre-history human behaviour has varied from society to society. It is easy to show too that people don’t in fact act from such simple motives. The whole objection thus falls. If the objector is particularly persistent or particularly foolish, he will try to argue that greed and laziness are built-in human characteristics, that they are part of what is more properly called “human nature”, that is, the biological nature of homo sapiens that distinguishes it from other animal species. But here biological science is insistent: such patterns of behaviour as greed and laziness are not and could not be inherited. Besides, a little thought will show that the idea of greed or laziness has no meaning except in society. A man can have black or white skin independently of society; but he cannot be greedy or lazy except in a social context.

Social science tells us that human behaviour changes. Biology tells us that traits like greed are not built-in and are not transmitted by heredity. So the human nature objection hasn't a scientific leg to stand on. It's a myth. But why does it persist?

There are at least three reasons.

The argument “you can’t change human nature” was developed as an answer to those who wanted social change in the 18th and early 19th centuries. The real purpose was to argue not so much that you can't change human nature as that you shouldn’t try to. Too loose use of the phrase “human nature" to cover human behaviour and psychology dates from this period. Which is not surprising since neither sociology nor biology nor psychology were far developed at that time. Previously thinkers in England and France had worked out a materialist theory of knowledge which saw man as the product of his environment. Change the environment, they said, and you will change human behaviour. Human nature could be improved! This was the message of English and French materialism and was taken up by social reformers everywhere. The reactionary supporters of the old order could only come up with the human nature objection.

Most of these reactionary thinkers were religious and, in the Christian dogma of original sin, they had a ready-made argument. Many of the reformers rejected this dogma; some even were atheists. But religion in preaching that man is born “evil”, "depraved”, "corrupt”, “wicked”, "sinful" and the like is clearly a powerful source of the view that man’s nature would be a bar to Socialism.

The rising middle class in England in the 17th century developed its own ideology (which was transmitted to their colleagues in America by the Pilgrim Fathers). This was part Puritanism and part what has been called "the theory of possessive individualism”. The originator of this theory, in a coherent form, was Thomas Hobbes in his book called Leviathan. Politically, Hobbes was a supporter of the King (Charles II) and an opponent of the middle class. All the same his theory well suited capitalist society. He held that in nature there was a war of all against each and that this was only ended by a contract to set up a government which would restrain everybody, save for the governor or governing class. Abolish the oppression of government, said Hobbes, and all Hell would break loose.

The human nature myth, like the religious dogma of so-called original sin, has long been used as an argument against social reforms, let alone social revolution. Now integrated into the theory of possessive individualism they are part of the ideology by which capitalist society seeks to justify itself.

Human beings are quite capable of co-operating as free and equal men and women, to produce this wealth they need and to run a social system in which the satisfaction of these needs will be the guiding principle. Men are not naturally lazy. Quite the contrary. Working (which after all is only the expenditure of energy) is a biological as well as a social must. Socialists assert that men and women can so organise the conditions of work that they can get pleasure from working and making useful things. Nor are men naturally greedy. Grabbing and hoarding are signs of scarcity and insecurity. These are certainly features of capitalism, but they won’t be of Socialism —the society of abundance. Where men and women have free access to what they need to live and enjoy life, there will be no reason to take more than you need. To do so would only clutter up the place where you live. You might as well leave what you don’t want immediately in the local store, sure in the knowledge that you can always get them whenever you want. And of course human wants are not really insatiable.

Socialism is a practical possibility. Human beings are capable of better things than the priests would have us believe.