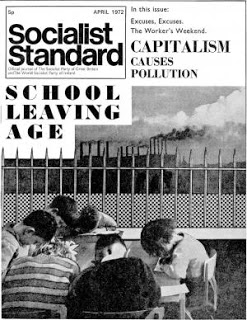 From the April 1972 issue of the Socialist Standard

Whenever the port-flushed hunting fraternity are compelled to think about, and justify, what they call their sport, they are likely at some time to interject that what finally keeps them at it is the suspicion that the fox actually enjoys being chased across the country-side to the point of exhaustion with a final flourish of being torn to pieces by the dogs.

Of course if the fox ever had time to think about it he might realise that all those ridiculously callous men and women in hunting pink cannot really justify what they are doing; unable to face their guilt they invert it. Since we are not foxes we can go further and say that this is a technique commonly used by a privileged group to justify their superior position and the effects of it upon their underlings. By now the drift of our argument should be becoming clear, even to the keenest huntsman who may have thought that this was to be a friendly discussion of his favourite bloody pastime.

For example let us consider some of the panic-stricken propaganda which has been fed to us since the unemployment figures officially topped the million mark. Now all those people are out of work at a time when every government spokesman who is brave enough to open his mouth about the economy tells us that we are in for a time of unprecedented prosperity. For some, indeed, that prosperity might be said to be already at hand; on the very day the government admitted to one million unemployed, the Financial Times ordinary share index hit a peak of over 500. Just over a year ago the index was 340, and falling.

Now it was obviously difficult for the government’s supporters to justify this apparent anomaly. One possible method of doing this was tried in the Daily Telegraph (21/1/72), which carried an article on the theme that there may in fact be a lot less than one million out of work, since the figure is inflated by fiddlers— by people who register for the dole while doing part-time or casual work. Especially mentioned was the building trade, with its substantial numbers of workers on the Lump — workers who, under the guise of the grand title of "self-employed sub contractors” need be no more than young fellows over from Ireland, digging trenches and pouring concrete. The Telegraph said, correctly, that many of these workers defraud the Inland Revenue over their income tax and therefore they also . . could be . . . claiming dole while working.” In fact, the two fiddles are distinctly different; self-employed workers of this sort are rarely able to claim unemployment pay because they don’t keep their card stamped, so by the same token they are unlikely to be swelling the ranks of the registered unemployed.

In any case there is another side to this tarnished coin. Undoubtedly there are workers who fraudulently get dole—who can blame them, since capitalism is one vast swindle, legal or otherwise? But at the same time there are those other workers who deflate the figures by not registering when they are entitled to do so. Anyone with any contact in this field knows that this is a not inconsiderable factor; they are people who may be reluctant to go to the Labour Exchange because they are not fully literate, or scared by officialdom, or depressed by the futility of it all. Sometimes they are bewildered by the procedure and get lost in the muddle of paperwork; sometimes they simply prefer to look for a job themselves rather than queue up to be interrogated by a clerk at the counter. The total number of these sorts of cases is uncertain but a subjective assessment suggests they could outweigh the fiddlers on the other side of the scale.

What the Telegraph is implying, to the applause of the hunting circles and in the suburbs where they ride to hounds only in colour-supplement dreams, is that the unemployed can find work any time they want to and must, therefore, enjoy being out of work. Anyone who is inclined to believe this should pop along to their local friendly Labour Exchange or Social Security office to join in the fun with the people in the queues, enjoying their lot almost as much as the fox when he starts to feel the dogs’ hot breath on the back of his neck. They might reflect, in any suitable pause in the gaiety, that the sort of argument put forward in the Telegraph, of excusing capitalism’s shortcomings rather than dealing with them, is really quite an old established one.


A couple of hundred years ago it was being used copiously to excuse the excesses of the slave trade. The suffering of the slaves was said, by the spokesmen for those who were making a fortune out of it, to be greatly exaggerated. In any case, the slaves were inferior beings; ". . . the most ignorant and unpolished people in the world, a little better than the lions, tigers and leopards . . . wrote Lord Chesterfield. Then again, the slave trade was actually an advantage to the slaves; after all they were being taken from a heathen land of tribal wars to a Christian country of peace where, said the Society for the Propagation of the Gospel (which owned slave plantations in the West Indies) they would experience ". . . moderate labour unaccompanied with that wretched anxiety to which the poor of England are subject . . .”

In more recent times, and with more direct relevance to our situation today, the same argument was used about the unemployed in the thirties. Then, as today, we were being told that the figures were inflated by malingerers:

. . . hundreds and thousands of young men who do not show any disposition to stir themselves to get out of unemployment into employment. They are content with a life of laziness . . . there is a slackness of moral fibre and of will as well as of muscle . . . (leader in the Times 22 February 1938)

The unemployed were even supposed to prefer the meagre food available to their dole-stricken tables. In his famous survey in 1934/5, Boyd Orr found that only one half of the population were getting a diet adequate for health and that for 30 per cent the diet was seriously deficient. We can imagine, if we did not actually experience it, what misery lies behind those words “seriously deficient”. One method of easing the problem for children was for local authorities to supply free, or cheap, meals at schools. Some tried this; others argued that there were no need, that the kids actually preferred to bring their own food (this was in rural areas) knowing that what the children would bring would rarely be better than bread and margarine. Only with the advent of government subsidised meals, as part of British capitalism’s campaign to keep us stoked up during the war, did this stubborn preference for bread and margarine miraculously come to an end and the working class stop enjoying malnutrition.

That strange coincidence really opens up the question. If the unemployed figures are made up so considerably of malingerers, if workers enjoy a stodgy, monotonous, deficient diet and all the other symbols of their poverty, why do such preferences rise and fall so spasmodically? Why do they rise in different countries at the same time, just when capitalism is in a slump and therefore luckily able to cater for this perverted taste for punishment and deprivation? Why are there so many malingerers around just now, to push up the figures to a million when they were working so industriously a couple of years ago when the figure was about 600,000 ?

Who believes in such coincidences? Statistics are by their nature imperfect (who has better reason to know that than the Socialist Standard?) but they do have the value of indicating social trends and movements. If the registered unemployed are now over a million it cannot be simply explained away, because it means something. It means that workers are destitute and suffering; it means that the men who profess to be able to control and improve our situation can do nothing about it. Indeed, Heath has recently admitted his own bewilderment:

The combination of a high rate of inflation with a high level of unemployment was unique in British experience.
(Daily Telegraph 25/1/72. report of House of Commons debate.)

Of course Heath might have gone further and admitted that the social system he discussed so confidently when he was making his promises in the election in 1970 is out of control. In fact all of capitalism’s apologists might be seized by an inexplicable fit of honesty and admit what the evidence proves beyond doubt—that the working class hate unemployment and idleness and waste; that they are not content with hunger and malnutrition and poverty. But rather than do this, capitalism makes its excuses, and there are always cringing journalists to give them public voice.

Even when the system might come near to confessing its own shortcomings, it manages to turn the argument. A war, for example, can always be conveniently excused as the result of the insatiable lusts and unmanageable psychoses of the evil men who lead the other side— and evil men, as we are all taught in school, are history’s tragic accidents. The inevitable failures of capitalism can be explained away in such terms, or as mistakes which shrewder men might have avoided; thus Wilson can sneer at Douglas-Home as a washerwoman (as if the ex-fourteenth Earl knew the meaning of the word) implying that capitalism could be made to work in Britain provided less stupid men were in charge of it.

Wilson is one of the politicians who know better than that. The actions of governments are conditioned not by the personalities of their members but by the nature of the society they govern—or rather which governs them. Without doubt the Heath government would love to be able to eliminate unemployment at the same time as they eliminated the problems which “full” employment brought for capitalism, which made capital investment such a tricky proposition for so long. Every government since the war has set out to solve that one and has failed, basically because capitalism is a society of divided interests, with the capitalist class on one side and the workers on the other. It is not a society where rational decisions can be taken on humane grounds; it is society of chaos, based upon the fundamental anarchy of production for sale.

To excuse and justify the anarchies of capitalism is to help perpetuate them. As long as the system lasts there will aways be something to explain away—some inhumanity, some anomaly, some chaos. Tragically, at present it is the very people who suffer the effects of capitalism—the working class—who are too ready to justify it. They accept the nonsense that the unemployed are substantially made up of malingerers, even if they read about it while they are themselves in the dole queue; they accept that in war the other side is evil incarnate, and so on. In other words, they accept their own suppression which means they have something to learn from the fox, who at least runs for cover, because he knows just who those slavering dogs are after.
Ivan
Posted by Imposs1904 at 4:29 AM