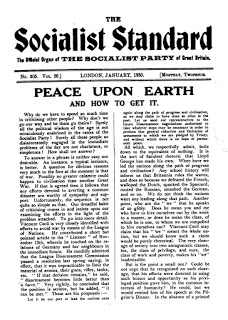 From the January 1930 issue of the Socialist Standard

Ex-Sergeant Goddard was recently defendant in an action brought by the Crown for the recovery of money which he was believed to have received as bribes. The amount was about £12,000 and everyone knew that he could not have saved £12,000 out of his pay. One of the newspaper gossip writers remarked that an “ordinary honest man” would take a lifetime to save so much money. - He would indeed if by “ordinary honest man" were meant the average worker. According to the Ministry of Labour, the weekly earnings of manual workers numbering over five million and spread over all the principal industries, averaged about 50/- per head in 1924. (See Ministry of Labour Gazette, July, 1927.)

The Capitalist class live out of the difference between the value of the goods produced by the workers and the amount paid to the latter as wages and salaries. The Capitalists are able to do this because they own and control the means of production and distribution and can, in consequence, compel the workers to accept employment on these terms—the alternative being unemployment. It is interesting to consider how these fortunate property-owners came to be in the privileged position which they occupy and to consider what hope members of the working-class have of climbing up beside them.

To save £l2,000 in a working life of 40 years would necessitate the putting away of more than the British worker’s total weekly earnings even after allowing for the accumulation of interest. We can, therefore, safely assume that people do not get rich by saving, if all they have to save out of is the wage of a worker. We are nevertheless always being reminded that this or that millionaire started life as a paper boy or a boot-black, and is a “self-made man,” the implication being that wealth is normally the result of the individual’s hard work and ability. Mr. Josiah Wedgwood, B.Sc. (Econ.) has now given us the results of a special inquiry which he undertook in order to find out exactly where the rich get their money.

The results of the Inquiry are set out at length in “The Economics of Inheritance.” (George Routledge & Sons. 1929. Price 12s. 6d.)

It is impossible in brief space even to summarise the elaborate material on which Mr. Wedgwood bases his conclusions. It is, however, interesting to notice that in a review the “Economist” (23rd November) recognises it as “an important book” and has no criticism to offer of the method by which the conclusions are arrived at, nor of the conclusions.


The proportion of the total property before the War derived from inheritance may be put at round about three-fifths. (See p. 120).

In other words, our propertied class in 1912 derived less than half their accumulated wealth from savings out of their annual incomes. They were rich mainly because their fathers were rich.

Mr. Wedgwood made a separate inquiry into the sources of the wealth of a considerable number of wealthy people who died recently, basing his examination on documents filed in the Probate Registry at Somerset House. He found that


Of the Men in the upper and middle Classes at the present day, about one-third owe their fortunes almost entirely to inheritance, . . . another third to a combination of ability and luck with a considerable inheritance of wealth and business opportunity, and the remaining third largely to their own activities.—(P. 163.)

Mr. Wedgwood points out that “many in the third category, though receiving little or no actual property by inheritance or gift, had received a superior education or relatively expensive training.” (P. 164.)

We see, therefore, that the way to get rich is to choose your parents wisely, failing which your chance is small. It is still possible to climb but possible only for the very few who are very lucky.

Lastly, Mr. Wedgwood tells us what are our chances of getting our foot on the ladder.

We would add a note of warning to any reader who fancies himself as a likely starter for the £10,000 stakes. Ex-Sergeant Goddard, who was paid by the propertied few to protect their property against the propertyless many, thought he saw a way of proving that Capitalism never keeps a good man down. But he committed the unforgivable crime of being found out and is now serving a sentence of 18 months’ hard labour.

The moral of all this is that if you are born into the ranks of the Capitalist class you have an excellent chance of living well and dying with more wealth than your father before you; if you are born a worker you will live hard and die as poor as you began—unless you join with us to get Socialism.