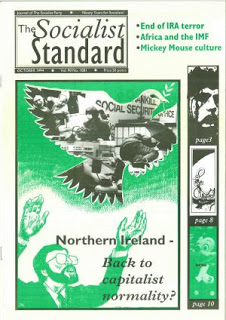 TV Review from the October 1994 issue of the Socialist Standard

With crime so dominant in local, national and international news, it is hardly surprising that it features so prominently on television. This said, the array of crime-related programmes on British TV must soon be expected to reach saturation point. Both BBC and ITV currently cram their schedules with serials and features about the doings of the police in particular.

Possibly the most entertaining is BBC1’s Crimewatch UK which aims at helping the police do their work for them. It is presented, appropriately enough, by a couple called Nick and Sue. Realising that there is not too much antagonism in society at present towards those lucky enough to be able to defraud banks and multinationals out of their millions, Crimewatch instead focuses on violent crime carried out by desperate members of the working class against other workers hired to protect the property of the bosses. These invariably include Post Office workers, building society staff and others in a similar position. This plays on the good-natured side of most workers — they may not care much if the Halifax loses a few thousand of its profits, but they are likely to respond if somebody just like themselves is looking down the wrong end of a sawn-off shotgun for their £200 a week.

Sometimes Crimewatch spends time on other kinds of violent crime that are not ostensibly property related, particularly sexual crime. Here it does a job that even more people are likely to identify with, but to what effect? While armed robbers are thrown in Strangeways or Brixton to become even more embroiled in violent culture, sex offenders are locked together with others of their ilk so that they can turn their deviancy into a fine art in time for their release. The question that must really be asked is what sort of a society is it that treats its deranged and irrational members in such a way as to guarantee their problems become worse and not better? And, taking this into account, what real use does a programme like Crimewatch have? To say that it is a sticking plaster on capitalism’s burgeoning crime problem must be an insult to the usefulness of sticking plasters.

The flashing blue light
Most crime-related TV shows are of the serial variety, ranging from depictions of the organised chaos of US police work, like Cagney and Lacey, to home-grown creations like The Bill. For a time, The Bill was easily the best in this category, with some strong characterisations, but recently it has lost its cutting edge. The stories are the same — drugs, minor fraud, petty thieving and domestic squabbles, but without the sinister undertones provided by characters like Frank Burnside and Sergeant Roach whose approach was straight out of the West Midlands Serious Crime Squad's manual on The Care and Attention of Suspects and Witnesses. It would seem that The Bill, after many complaints from the police themselves, has gone for the official view of what constitutes “realism" in the Force. No more unnecessary violence, no more intimidation and no more back-handers.

It is a pity that this alleged "realism" isn’t reflected in the portrayal of the working class at large. Most workers in The Bill, like in one or two other programmes that could be mentioned, are depicted as the scum of the earth. One of the clear messages of The Bill is that if it wasn't for the intervention of public-spirited coppers like Reg Hollis then working-class life would sink into a state of barbarism. There may be a good deal of back-biting and office politics portrayed in the programme amongst the police themselves, but viewers are left in no doubt who the good guys are. The odd storyline still bucks the trend, but the overall message is still that left to their own devices the working class would stab one another to death and burn down their own houses until there was nothing and nobody left. A copper’s eye-view of the world can be a dangerous one indeed, and The Bill reinforces this more than most.

It is likely that much crime and police work is just too humdrum to be of interest to viewers. As such, there is bound to be some sort of trade-off between realism and entertainment value in any police series, but when realism goes out of the window, once again at the expense of the ordinary worker in the street, then it is time to take heed.

On a happier note, ITV recently revealed that one of its other top crime shows is to be axed. Michael Winner's True Crimes has now become so grotesque that even the ITV bosses can no longer stomach it. No more will we have to watch the oleaginous Winner breathing his odium across the airwaves, glorying in the brutality of bloody murders. He will now have more time to spend on his pompous Sunday Times column, which seems a small price to pay. The portrayal of crime on TV will undoubtedly be better off without him. but it can be little more than a welcome start.