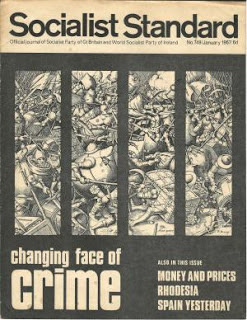 And a Happy New Year
If the Labour Government gets its way, the wage freeze will continue almost unabated until July. And even after that, there is going to be a lot of top level interference in pay negotiations, whatever the T.U.C. may feel. This much emerges from the Government’s White Paper issued at the end of last November.

When the Government’s plans were announced on November 22nd, there followed one of those little discussions in the Commons in which one or two interesting things were said. For instance that pearl of wisdom from the lips of Mr. Ian Macleod: ‘The normal or primary cause of poverty is the size of families.” What enlightenment! And this is one of our ‘betters’—a man we are supposed to respect for his wisdom in guiding our affairs. More about poverty next month, but for the time being, we’ll just content ourselves with reminding Mr. Macleod of the large families which exist, some of them very rich indeed. The cause of poverty has nothing to do with family size, although of course an already poor condition can be affected by it to some extent.

But if Mr. Macleod waxed eloquent in his ignorance, he certainly could not find a much better match than Economic Affairs Minister Michael Stewart, who was at great pains to explain how legitimate and desirable profits were. “Of course,” he said. “It’s up to the Government to take fiscal measures to deal with excessive growth of profits” . . .  and just what that meant is anybody’s guess. From our point of view, there is no such thing as “excessive” profit; we are opposed to the profit-making system anyway. But for the Labour Party, perhaps an apt new year’s slogan would be. Profits for the few and a wage freeze for you.

Incidentally, if you watched TV a couple of nights later, you may have seen the rotundly well fed Mr. Callaghan telling us all to get ‘lean and fit’ for the battles ahead. This is merely a variation on an old and tedious theme which went under different headings in the past, such as ‘pull your belts in.’ And strangely, it is often uttered loudest by those with the biggest waistline. There is no shortage of large girths and accompanying impertinence, in the present Labour Government.


Exit Another Promise
It was Mr. Krushchev, I think, who said: “Promises are like piecrusts, made to be broken.” Well, as a particularly cynical Soviet politician, he should have known; but when he said it, there were umpteen other politicians hastening to make public condemnation of his words. Yet they certainly had a ring of truth in them as far as capitalist politics is concerned. We can all recall, for example, how the Tories said they would stop the rise in the cost of living—and failed; and we have seen how Mr. Wilson’s government are doing all sorts of things they said they would never do, like favouring unemployment. The latest of their broken promises is in housing. According to the Housing Ministry’s report of November 14th 1966, there is little prospect of their programme going above 382,000 dwellings this year, despite their 1964 election pledge of 400,000 a year minimum. If you are a Labourite, you will perhaps be surprised and disappointed. If you are a Socialist, practically nothing will surprise you.

Maybe some politicians make promises they know they haven’t a chance of keeping. Maybe others are more sincere. It makes little difference to the end result, because capitalism operates regardless of the sincerity or otherwise of its statesmen. Its caprices can make a mockery of the most modest promises, and housing has been a perpetual casualty in this respect for many years. Yet you can take an even bet that every capitalist party will make a promise to solve it, at the next election.


The Cost of Living — and Dying
We live in an acquisitive society; everyone is concerned directly of otherwise, not only in producing wealth, but in grabbing hold of as much as possible of it. Nevertheless, it’s a process which favours the few to a considerable extent, for most of us can only dream of being rich. Amassing riches means, among other things, that sales must be kept as high as possible and costs as low as possible. Hence a constant obsession with production costs in capitalist society is all-pervading, and pokes its ugly snout into fields where, we have been traditionally led to believe, the only concern is human welfare.

Such as medicine. And it is depressing to see the cold-blooded way that some of the leading doctors and experts accept without question that costs are really more important than human beings — although they would fiercely deny this if you expressed it so baldly.

According to the Guardian (28.11.66), between 6,000 and 7,000 lives a year could be saved in the 15—44 age group, if there were concentrated research, medical facilities, and health education. Good for its own sake, you might think, but the fact that it would mean a “nett contribution to the economy of about £30 millions was the salient point to Mr. George Teeling-Smith of the Office of Health Economics. Each survivor, according to Mr. Smith’s calculations would be worth about £5,000 . . .


. . . and if the cost of curing him was less than this it was ridiculous not to find it.

You see what I mean? What if the cost were greater? The object is to get a profit, or at least avoid too great a loss, and if that can’t be done, then the priority shifts elsewhere.

This sort of consideration has affected the allocation of haemodialysis machines for the treatment of kidney disease sufferers. At present there are not enough of these machines to go round, so doctors have the unenviable job of deciding priorities. Those who are lucky enough to get a machine will at least have their lives prolonged, but in the present state of medical knowledge, the remainder will almost certainly die.

If a Socialist world had to deal with such a problem, we would first of all strain every nerve and fibre to overcome the machine shortage, and if despite this doctors still had grim decisions to make, at least the question of cost would have no part in them. But today, in a set of eight criteria listed by Professor de Wardener of Charing Cross Hospital, the following are noteworthy for their callousness:


What are the financial consequences?
Who ought to pay?
Ought the large sums involved be directed to this purpose?
(Guardian 28.11.66).

It seems there are more ways of dying for capitalism than on a battlefield.