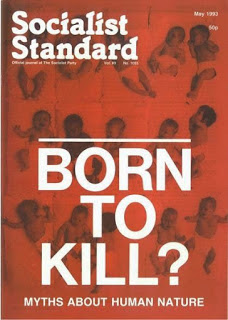 From the May 1993 issue of the Socialist Standard

To say that millions of human beings suffer from hunger because there are too many people is to subscribe to a myth. It is an explanation of a situation which is not based on an examination of the facts. The continued existence of millions of lives endured under the scourge of hunger, malnutrition and starvation is not “natural” or “unavoidable” but is entirely artificial.

The so-called population problem is in reality a poverty problem—a problem of capitalism. Who is not moved at the sight of famine victims depicted on TV screens, newspapers and magazines? The desire to do something about such an appalling situation is natural and worthy. Socialists argue that the first step to be taken in solving the problem of hunger is to recognise that famines are artificial and that the miseries that they bring are unnecessary and avoidable.

There are three dangers to be avoided, however.

First is the danger of believing that charity is any sort of solution. The danger here is that giving money to organisations such as War on Want or Band Aid diverts attention from the real causes of hunger and does nothing to remove them. It also encourages the “it’s all right. I’ve done my bit” attitude which is the basis of political apathy.

The second is getting involved in political action to pressurise governments to give more aid. Charities themselves admit that the scale of world hunger is beyond their means and call on governments to put money into schemes meant to alleviate the suffering of poor people. Those who urge the adoption of this “solution” would do well to remember the words of Tom Clausen (President of the World Bank) who said in 1982 that it was

not in the business of redistributing wealth from one set of countries to another. It is not the Robin Hood of the international financial set. (Quoted in Anne Buchanan Food, Poverty and Power. 1982. p. 68).

The third danger is that of blaming the victims, blaming the poor for their poverty. This attitude dehumanizes the poor so that they become “hordes”, “floods”, “a cancerous growth" or “a plague of people”. It also, by making the problem seem so enormous, saps the political will to do anything let alone take any meaningful action. In addition it patronises the Third World poor in particular as they are seen as being helpless victims unable to do anything for themselves. The attitude of the neo-Malthusians is to condemn the poorest of the poor to death because, as Paul Erlich has written, “the battle to feed humanity is already lost” (The Population Bomb, 1971, p. 15).

Enough food
World population is about 5,700 million. That figure is set to reach 6,000 million by the year 2000. Estimates of the number of hungry vary. According to the US President’s Science Advisory Council 450 to 500 million people are hungry. The World Bank's estimate (using different criteria) is 730 million without enough to eat to enable them to have an active working life: of these 730 million 340 million have diets insufficient to prevent serious risk to health and they suffer arrested mental development and have stunted growth.

The question then arises could the hungry' be fed?

Current world food production is in the region of 3,800 million metric tons. Half of that by weight is grain. Equitably distributed it would give each man, woman and child on the planet 5lbs of food per day. United Nations Food and Agriculture Organisation statistics show that this food represents 2709 calorics per head per day and 71 grammes of protein per head per day (United Nations Statistical Yearbook, 37th edition, 1993. Table 24, p. 17). Nutritionists calculate that on average human beings need between 1800 and 2500 calories a day (for energy) and 45 to 50 grammes of protein (for body growth and repair).

The amount of food currently being produced would adequately feed the expected world population for the year 2100.

In the mid 1980s the US Department of Agriculture made some calculations based on actual nutritional needs and estimated that the 67 poorest countries (those with the lowest income per head of population) required 25.8 million metric tons of food to meet their needs. The FAO estimated needs to be 20 million metric tons. The 1984-5 global cereal carry-over was 294 million metric tons, not counting the butter, beef, milk powder, etc kept in storage because the market could not absorb the supplies. (It cost £1,570 million per year for the UK alone to keep it off the market).

These figures do not take into account the fertile land withdrawn from production in an attempt to keep up prices and maintain profit. The agricultural economist Colin Clark calculated in the early 1970s that world resources of agricultural land could feed 47,000 million people at maximum standards (Population and Land Use, 2nd edition, p. 153).

In the face of this overwhelming abundance why do millions of our fellow humans continue to starve? The situation is clearly intolerable.

Not produced for need
What needs to be done first is to recognise something so obvious that it might be thought not worthy of restatement and that is this: food is not produced primarily to satisfy human need, but to be sold on the market so as to realise a profit. No profit, no production. Because the market only recognises effective demand (i.e. demand backed by the ability to pay) people starve within sight of food. The economist Keith Griffin (President of Magdalen College, Oxford) pul the problem this way:

The fundamental cause of hunger is the poverty of specific groups of people, not a general shortage of food. In simple terms, what distinguishes the poor from others is that they do not have sufficient purchasing power or effective demand to enable them to acquire enough to cat. The problem is the relationship of particular group of people to food, not food itself. (World Hunger and the World Economy, 1987, p. 18).

That academic assessment is backed by the findings of aid charities in the field. War on Want’s Don Thomson has stated:

Experienced disaster and officials now admit . . . that they know of hardly any famine in living memory where there has been an outright shortage of food locally. They found instead that the victims did not have the means to buy. (New Scientist, 7 November 1974).

In a world of buying and selling a bumper crop of food cannot be guaranteed to feed the hungry. Take for example the situation in Mozambique where up to 4 million people were facing starvation largely because the country's agricultural production had been wrecked by years of civil war. In 1987 neighbouring Zimbabwe had a 2.8 million ton “maize mountain”. A stack of white maize three storeys high stood alongside the railway linking Zimbabwe and Mozambique 55 miles away. The food would have met Mozambique’s needs for several years but as Pat Henderson. chief executive of the Zimbabwe Commercial Grain Producers Association said at the time:

It's not only a human problem, it's a financial problem. We cannot give our maize away (Observer, 15 February 1987).

Henderson was right. It is commercial madness to give free access to food in a money economy. The human problem of hunger cannot be solved within the framework of production for profit.

The challenge that faces humanity is that of organising things on a different basis. Class ownership of the world’s resources must be replaced by common ownership. This will be done when the majority of the world's population—we who own no productive resources other than our ability to work—organise to take democratic political action to dispossess the profit-seekers who currently own those resources.
Gwynn Thomas