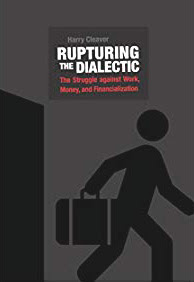 1. First, I never argue (book review of Cleaver’s Rupturing the Dialectic – the Struggle Against Work, Money and Financialization in January Socialist Standard) that capitalists are not interested in profits, on the contrary precisely because I argue their system is based on putting people to work, profits are essential to maintaining and expanding the imposition of work. Second, writing ‘It’s a point of view but not that of Marx’ is simple assertion but makes no argument to convince the reader. It also smacks of sectarianism: all Marxists whose interpretations differ from mine are not Marxists at all.

2. First, the superficiality of the reading is apparent in ascribing to me the ‘classic error’ of underconsumptionism (i.e., ‘workers not being able to buy back all they produce as the cause of crises’) given that the inadequacy of consumption demand is clearly treated as only one of many causes of ruptures in the circuits of capital, not ‘the’ cause of crises. Second, saying that I make the mistake of seeing taxes as simply a burden on workers, while ignoring the discussion in the book of how some of what taxes pay for is not only of use to workers but are programs and services we have fought for, is another misrepresentation.

3. First, it’s odd that you seem to accept the idea that getting rid of money and markets are essential elements in getting rid of capitalism, but dismiss efforts to marginalize money. In the absence of an actual argument against ‘marginalizing money’ I’m left with the impression that the dismissal is based on the oh-so-revolutionary rejection of ‘reformism’. Second, leaving aside evaluation of your list of reforms as accurate representation of the struggles I discuss in the book, I must say that simply dismissing struggles for reforms of use to workers with no rationale hardly constitutes an argument. At least Weston – mentioned on page 235 of the book, in the section on ‘Reform or Revolution’, made a case for dismissing struggles for higher wages – a case that Marx refuted with counterarguments as to why such struggles were important. Arguments with which I agree in the book – one of those many moments that you would have to counter to make a convincing argument that what I have written is ‘not Marx’. Third, there’s no ‘paradox’ in supporting both lower costs of living and higher wages, they are complementary and both buy time (and energy) for struggle.

4. First, the assertion that success in lowering consumer prices or making some goods and services free automatically implies that wages will fall just doesn’t hold water. This assertion ignores how both the value of labor power and the level of wages/income are determined by struggle. I do not ‘assume’ workers ‘could successfully resist’ efforts to lower wages, only that they generally try to resist. There are plenty of historical examples in the book of workers failing to resist as well as of successful resistance. Second, the last line about one idea of autonomist Marxists contains, once again, only pure assertions with no demonstration or argument that might lead the reader to take them seriously, ie, the assertion about what they think/imagine and the assertion about the idea being a  ‘mistake’.

Had I been editor of your newsletter, I would have sent the published text back when still a draft along with comments like the above – and suggestions about how to do the job in a more convincing manner.
Harry Cleaver


Reply:
1. We never said you argued that the capitalists weren’t interested in profits, only that you said that they were more interested in controlling workers and that making profits was a means towards this end. The particular passages we had in mind were these: ‘… socially and politically speaking, profit making is merely the capitalist means to its social aim of controlling us by forcing us to work’ (p. 83) and ‘Marx focussed on the dialectical character of the struggle within capitalism between those who impose work and those who resist’ (p. 72). There is no evidence that this was Marx’s view on what the struggle was and who it was between, and there is nothing ‘sectarian’ about pointing this out. It’s a question of fact, not opinion.

2. On p.55 you do indeed use the workers-can’t-buy-back argument, which can’t be an explanation of crises since it is the case that the workers cannot buy back out of their wages what they produce all the time, even during a boom. And how can it be ‘misrepresentation’ when we didn’t represent anything about the conclusion you draw from the notion you accept that taxes are a burden on workers as well as on capitalists? We willingly grant though that you draw the logical conclusion from this mistaken premise that workers should get involved in disputes within the capitalist class over which section of them should bear more or less the burden of taxation.

3. You seem to have missed our point completely. While free services and free access to use-values even under capitalism show that people adapt to this by only taking what they need (rather than grabbing and hoarding), under capitalism these measures have the economic effect of reducing the cost of reproducing labour-power and so exercise a downward pressure on money wages. Our view is that the best way to combat this is the trade-union struggle. We don’t accept the view of ‘Citizen Weston’, which Marx refuted in his talk to British trade unionists in 1865 later published as Value, Price and Profit, that struggles to increase wages are pointless as they merely lead to a rise in prices leaving workers no better off. That is a fallacy. For us, the struggle to get the highest price possible (what the labour market will bear) while not revolutionary is not ‘reformist’. We say workers should wage this struggle and our members take part in it, even if it is purely defensive and never-ending.

4. We always thought that so-called ‘autonomist Marxists’ criticised what they imagined was the ‘economic determinist’ position of those who argue that there are narrow limits to what workers can achieve under capitalism by their struggles. Are we wrong about their/your ‘voluntarist’ position on this question, not dissimilar to that of common or garden reformists, that this is not the case and that your disagreement with them is instead only over method (direct action rather than parliamentary action)?


Ooooh, hark at him!