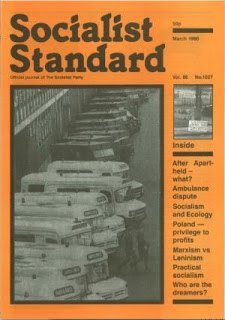 From the March 1990 issue of the Socialist Standard


The first part of this article appeared in our January issue

Our practical proposals for the organisation of production in socialism are not based on arbitrary speculations about future society. These are developed, as Marx insisted they should be, from “the existing state of things”. In socialism, useful labour will produce goods and provide useful services directly for needs. In outlining the ways in which this could operate we begin from the fact that a world-wide structure of useful production already exists.

Under capitalism, useful production serves privileged class interests and is geared to all the conditions of the market, buying and selling and the profit motive. With the establishment of socialism these class features will be abolished, leaving the useful factors to operate freely and directly for needs. The mechanisms which co-ordinate the structure of useful production now will be continued into socialism.

Modern production is an immense structure throughout which even a simple article has a complex productive history involving a world-wide division of labour. For example, the components of a ball-point pen include a plastic holder, a plastic tube containing ink and perhaps a brass ferule joining the steel ball point to the tube. Yet these few components and their materials are the products of metal mining and processing, the oil and chemical industries, energy supply, and world transport. These features of modern production are widely dispersed and, in supplying each other with processed materials and finished components, they combine to produce goods with no single or overall plan. Instead, they operate in a way which is self-regulating. Each mine, industrial plant or manufacturing unit and each point in the distribution of materials and goods performs its function without having to know what is happening in all the other parts, even though it may depend upon what these other parts are doing.

Useful Stream of Information
A copper mine in Zambia receives orders from around the world and this is sufficient information to signal it to begin mining activity. A plant processing brass in Britain may order quantities of copper from Zambia and quantities of zinc from Australia, and on receiving these materials it produces brass which it then supplies to the units producing things like ferrules for ball-point pens. At a further stage in this sequence, the unit which produces brass ferules supplies them to the unit which assembles ball-point pens. In response to its orders, this point of final assembly then supplies them to the distribution system and eventually they are taken up by the users.

This communication of required goods and materials operates as a sequence of signals throughout the entire structure of production, indicating what each part of the structure should do. If orders exceed stocks, this indicates more production. Conversely, if stocks exceed orders, this indicates reduced production. Without any need for a single, overall plan, this will operate in socialism as a system of self-regulating production directly for need.

This useful stream of information begins with consumer needs and then flows throughout distribution and on to each required part of the structure of production. In the opposite direction, throughout the markets under capitalism, there takes place a contra-flow of information. It flows from producers, through distributors, to the consumer. This information is the prices of goods determined by the accumulating costs of production and distribution plus profit. Prices are increased in each part of production, from mining through industrial processing, manufacture and assembly, then accumulating further through distribution until the final price is passed on to the consumer.

Whereas the useful flow of information expresses needs and both stimulates and co-ordinates the production process, the opposite flow of information about the prices of goods constrains production by restricting it to what can be sold at a profit. In this way the effects of the market, with its buying and selling, are disruptive in that they erect economic barriers against the free use of society’s productive powers. The effects of the market also load production and distribution with a burden of wasteful activities which vastly reduce overall productive efficiency. A further related fact is that the disruptive effects of the market constrain the rational allocation of resources for needs.

Waste of the Market
This is most obviously demonstrated by the countless billions of work days which have been lost over recent years as a result of unemployment and the fact that it has not been profitable to employ the workers concerned. Unemployment has excluded from production a wide range of human skills vital for the well-being of the community and represents a lost opportunity to produce of incalculable magnitude. Due to the constraints of the market we have seen from time to time an accumulation of unsold stocks of goods that people have desperately needed. This has included such things as building materials when many people are homeless. Millions of hectares of land in Europe and America have been taken out of production because of limited market capacity for food sales, while at the same time millions have died of hunger.

Because of economic rivalries between capitalist states, millions of people are held in military forces and vast resources including materials, sections of industry, manufacture, energy supply and high technology are diverted into armaments production. Because of the high costs involved, the techniques which are now available for reducing emissions of sulphur dioxide from coal-burning power stations have not been applied. As a result, this pollution continues.

The economic mechanisms of the market serve no socially useful function whatsoever. On the contrary, their effects are entirely destructive. The function of cost/pricing is to enable a business enterprise to calculate its costs, to fix its profit expectations within a structure of prices, to regulate income against expenditure and, ultimately, to regulate the exploitation of its workers.

With the establishment of socialism these economic barriers against the free flow of information about consumer needs to the structure of useful production will be swept aside. People in mining, industry, manufacture, farming, energy supply and transport will in the first instance carry on with what they are doing, together with the people running useful services such as hospitals, education, communications and so on. The basic difference will be the new relationships in which they carry on this work. Instead of being employed as wage workers by capitalist companies or state capitalist enterprises, they will be able to work in voluntary co-operation with each other to provide goods and services directly for the needs of the community.

A proviso is that the self-regulating mechanisms which have been outlined, although adequate for an existing useful structure of production, will also operate against a background of democratic planning where further development is required. With the elimination of wasteful and destructive activities, however, vast resources of people, materials, means of production and technique will become available. Any such development would take place in accordance with a balance of needs and not the least of these would be a proper care of the environment.