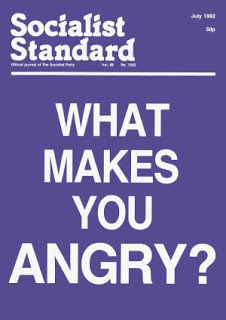 From the July 1992 issue of the Socialist Standard

Less than a week after winning the general election the new Conservative Secretary of State for Health, Virginia Bottomley, indicated that “uneconomic” National Health Service hospitals will be closed. It is believed that a special commission, under the chairmanship of Sir Bernard Tomlinson, will recommend the closure of one of London's 14 teaching hospitals. Speaking about this possibility Virginia Bottomley stated:


Hospitals have always closed. At the end of the war there were 300,000 TB beds in this country. Now there are about 300. So there must be change (Independent, 17 April).

This is a blatantly dishonest comparison. TB hospitals have closed because tuberculosis has been practically eradicated due to improved living standards since the end of the Second World War, greater natural resistance to the disease, and immunisation. To close beds because they are expensive to maintain in spite of the need for them is an entirely different proposition.


It is too early to say what the recommendation of Tomlinson will be, but I will not hesitate to take whatever decisions arc necessary to ensure that further generations of Londoners can have the best possible health service.

This example of Orwellian “doublespeak” claims that health care can be improved by reducing its provision. Already the closure of small hospitals, with loss of beds, and the concentration of most of the remainder into large district general hospitals, has led to many people in rural districts living considerable distances from the nearest hospital.

The reduction of hospital beds over the last 25 years led to record waiting lists of over a million people needing treatment by 1991. Political expediency prompted by an impending general election this year has led to patients waiting for treatment for more than two years being attended to. But there have been claims that this attempt to clear the back-log of politically embarrassing long-term problems has sometimes been at the expense of patients with more serious problems of a shorter duration.

Waiting lists
Some health authorities have reduced their waiting lists by the simple expedient of not carrying out certain categories of operations unless the patient opts for private treatment.

The closure of beds in psychiatric hospitals has led to long-term mentally ill people swelling the number of the homeless in Britain's major towns and cities. And Lord Justice Mustill has attacked the lack of provision for mentally ill offenders who move between prison and the community without anyone taking proper responsibility for their care (Guardian, 21 March).

The pressure on hospital beds has led to hospitals having to be “closed" to acute admissions on occasions because there are no beds available. Family doctors and medical staff in casualty departments are obliged to waste valuable time in telephoning other hospitals to find out if there is a vacant bed. This involves considerable delay in getting an ill patient admitted for treatment; can remove patients considerable distances from their families; and taxes the resources of the over-stretched ambulance service because of having to make longer journeys.

The ambulance service is already struggling because of the effects of the government’s economies without these added problems: in Greater Manchester there has been a reduction of 40 posts since August 1991 and further redundancies announced recently (Manchester Evening News, 28 April).

A consequence of the shortage of hospital beds and the need to be seen to be “economic" leads to the premature discharge of patients from hospital to convalescence at home. This has led to higher rates of re-admission in the last few years. But as turnover of patients is seen to be the barometer of efficiency irrespective of whether death or discharge is the reason for leaving hospital, the reduction of hospital beds can only aggravate matters.

There have been attacks on health care provisions in other ways: prescription charges have been increased several times more than the rate of inflation, and the charge for sight-testing have deterred some workers from having their eyesight tested as frequently as they should. Dental charges have increased considerably and in some areas it is difficult to find a dentist prepared to undertake NHS work.

It is expected that most health authorities will become self-governing trusts within the next two years and more family doctors will become budget holders to buy treatment for their patients.

Buying treatment
But an internal market does not provide more money for the NHS; it merely shuffles existing money between hospitals at greatly increased administrative costs. And with doctors being obliged to keep costs down, because of the risk of being labelled "uneconomic”, there is the likelihood that patients will get the cheapest rather than the most appropriate treatment. Because doctors can incur financial penalties for over-prescribing but may use money that they save on treatments to improve their practices some people in high-risk groups (diabetics, the elderly and the long-term mentally ill) have greater difficulty in registering with a doctor.

The debates over the numbers of patients treated and on the waiting list misses the point that poverty is the main cause of ill health. Unskilled workers are four times more likely to die from ulcers than the wealthy and are also more prone to develop heart disease. The Health Education Council’s 1987 report The Health Divide found that there was a difference in life expectancy of more than eight years for men in the most affluent parts of Sheffield compared with the poorest areas.

The large number of patients requiring medical treatment under capitalism (rather than being a matter for congratulation) is an indication of how poor the workers’ health is. Capitalism with its poverty, stress, alienation and pollution is unable to remedy this.

Nevertheless, the NHS, despite its shortcomings, does ameliorate some of the misery of illness caused by capitalism. But because health care “free at the point of use" represents a cost against production it is vulnerable to attack in a recession when there are a larger number of workers than are needed to meet the capitalists' requirements.

But poverty is not an inevitable part of the human condition. A socialist society producing goods for human needs and not for the market; a society of co-operation instead of the competitiveness, hostility and suspiciousness of capitalism could make the high levels of ill health and the long waiting lists for treatment a thing of the past.