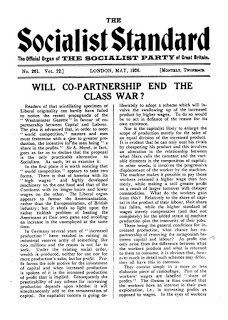 From the May 1926 issue of the Socialist Standard

Whereas the term “sport” was at one time associated with the idea of pleasure in “disparting” together, it would seem that the progress of Capitalism has rendered such an association (except in rare instances) ludicrous in relation to prevailing facts. It has, moreover, debased the original motive of social enjoyment into either a means to acquire profit, on into one of the potent methods of distracting the attention of the workers from the incessant gnawing of their problems of poverty and slavery. At the same time it helps to increase the physical efficiency (and thus the profit-making capacity) of those workers who participate, and provide an effective nerve-restorative for the tired wage-slaves who have merely the stamina required of spectators.

However far we may look back into the distant past, we fail to discover a period where games or sports of a similar character to those now indulged in were not prevalent. Indeed, Montague Shearman, who wrote the celebrated “History of Football," found traces of that pastime throughout the whole period of recorded history. It is not, however, our purpose to probe this question of origin, but rather, at this stage, to draw attention to the corrupting influence of Capitalism in revolutionising ideas which at one time were uninfluenced by the motives of a ruling class, and to point out that “sport," once free to all except the bodily impaired, has become, like other institutions, an organised business ministering predominately to the interests of the master class.

To those who may doubt the soundness of our contentions we would ask “Why do the master-class in their Press (which is largely dependent upon advertisement revenue) devote whole pages to the discussion of future sporting events?” “Why do they pour out reservoirs of slush in detailing the family history of Mademoiselle Pit-pat, who is to meet the doughty American champion, Tilly Slapbonk, at the Tooting Stadium?” “Why are we regaled with stories of the ingestive prowess of Charlie Bashem, and tales about the fondness of his protagonist, Teddy Tinribs, for Metaphysics and the Einstein Theory, before the inevitable fiasco is staged at the Talbot Hall?” "Would not the revenue to be derived from advertisements be more profitable than the insertion of some of this atrocious flap-doodle?” The answer to these questions is simple; the paid scribes of the master-class have acquired the grip of your psychology and they know how to take advantage of your gregarious instincts and innate love of sport to blind you to the imperative necessity for devoting some time and energy to the study of your slave position and the means of escaping therefrom.

Religion, Patriotism and "Sport"— these form the holy trinity of dope lavishly ladled out by the ruling class. Quite recently, through its mouthpiece, the Duke of York, the Government announced its intention of devoting £200,000 towards the development of "sports" in the Civil Service. This token of good will towards its employees was accompanied by further instances of benevolent intentions in the wholesale sacking of temporary workers (“ex-service" and others) and strenuous efforts in the direction of "speeding-up" and depressing the already exiguous conditions of the “permanent" staff. Could a better example be adduced to show the paramount value of sport to the employer in his attempts to gloss over the glaring class antagonism that now exists! It can be said, however, that this proposal of the Government was merely typical of the actions of the ordinary industrial “sweater” who will not demur at providing bowling greens for his employees or at subscribing to their football or other funds, but test his generosity in respect of the payment of higher wages or shortening hours of toil and a far different result is obtained !

Another aspect of the class division in society may be observed in the designations employed in various branches of "sport." We have the "amateur" and the "professional,” the "gentleman" and the "player,” the "select” clubs and the "working class” clubs; and the gulf between these divisions is the chasm that separates riches from poverty. It would be "infra dig” for a University boat-crew to row a race with a working class crew [especially as such a contest might reveal the unpalatable truth that the latter (who would be referred to as "those bounders") might achieve a "walk-over." !] Anyway, such a contest is inconceivable, for are not the workers, although capable of doing piece-work for eight hours at a stretch upon arduous and monotonous tasks, deficient in the stamina so essential for the sustained exertion of a twenty-minutes race?

Lest it be thought that the socialist is of the Puritan mould and disdains participation or interest in ‘‘sports” we can assure the reader that we begrudge the jaded worker none of the exhilaration he experiences in playing or looking on at games, and we see nothing pernicious in such indulgence provided he is alive also to his own class interests. Furthermore, the "sports” in favour with the workers are of a character entirely different from, and in no way so brutal or degrading as those held in regard by a large section of the bourgeoisie, whose atavistic desires, impulses, and propensities are fully catered for in the "blood" sports which occupy so much time and attention during a large portion of their useless existence. Tame, carted, deer and specially nurtured foxes afford excellent hunting material for these people of such "delicate sensibilities," but for whose genius, monumental industry, thrift, and "directive ability" (so we are assured), the worker would be bereft of the conspicuous amenities he is allowed to "enjoy"—amongst which amenities the hunting of a more prolific, a far less expensive kind of "livestock," is often an unwished-for privilege! We have no time for mawkish and sloppy sentiment—that can safely be left to our masters; but we confidently challenge the records of the most benighted “savage" customs to produce a more preposterous and equally abominable practice than that of "blooding" or bedaubing and smearing the blood of the slaughtered fox over the features of some girl of tender years after the completion of the chase. If additional evidence of the existence of a peculiarly "bourgeois" psychology is desired the pictures recently published in the Press depicting the “heroine" of the Quorn, whose horse fell dead beneath her during the hunt, should help to remove any doubts that might be entertained upon the subject. As to the effects upon character of these brutal "spirits," is not the evidence to be found in the chronicles of the Divorce Court?

Fortunately, in but one respect, the economic conditions affecting the working class tend to produce in them a more tolerant attitude towards non-human varieties of animal life, but this phase of the subject is not entirely relevant to our purpose. The easy gotten plunder which enables a robber class to live without the expenditure of physical effort in wealth production, tends to divert the energies of such a class in the direction profitable to their own comfort and pleasure, and so abundant leisure seeks its outlet in those "sports” which satisfy a craving for excitement and rescue idleness from the letters of "ennui." On the other hand, the worker who spends much of his time in looking for, or in holding, a “job,” is always afflicted by a desire to overcome the torture of insecurity. Hence some workers fall an easy prey to the press sirens of the master-class who encourage a belief that they can escape from poverty by “putting a bob on” or  "beating the book” and such-like fantastic nonsense, and so lure them from the study of the one solution to their problems—Socialism. A little thought would convince the down-at-heel “punter” that the millionaire race-horse owner, and the “bookie” (that somewhat sebaceous gentleman of the expansive smile and a protuberant frontage, seemingly held together by a heavy gold chain, which partially circumscribes that modern denotation of prosperity) do not exist solely to dispense largesse to the poor and needy. But this disease of betting, in its present form, will be swept away when the workers have tested the remedy offered by the socialist.

Again we emphasise that we do not deplore ‘‘sport ” as such, but we desire the workers to realise that the blighting influence of Capitalism has perverted the idea of seeking joy in social rivalries into a means on the one hand for the slaves to forget their lot, and so become more amenable to their task of grinding out profits, and, on the other hand, for the masters indulging in a quest for unwholesome pleasure, resulting in the reckless dissipation of wealth robbed from the wage-slaves.

Socialism alone can bring that joy which will express itself in an exuberance of healthful movement, such as is at present conceived of only in the dream which brings a transient solace to the weary worker when “slumber’s chain” has bound him to a world of pleasant unreality.
W. J.
Posted by Imposs1904 at 12:11 AM