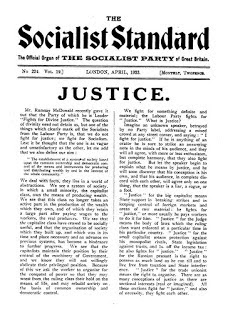 From the April 1923 issue of the Socialist Standard

The famous Doctor Samuel Johnson once said, “Two contradictory ideas may inhere in the same mind; they cannot both be correct.” And one is reminded of this obvious truth when reading the correspondence recently published in the "Daily Herald” on the subject of "Christianity and Labour.” Of the letters published the majority convey the view that there is a similarity between what the various writers call Socialism and Christianity. To the Socialist, however, those who hold this view betray an ignorance of both sets of ideas. For not only are Socialism and Christianity not identical; they are irreconcilably opposed. The antagonism between Socialism and Christianity is fundamental, as will be seen in the different methods employed to explain social conditions, and also in the totally different concepts of life. To find an explanation of present social conditions the Socialist analyses society and discovers therein two distinct social classes, separated from each other by clearly marked political and economic characteristics. One class, the capitalist class, own and control the means of wealth production, but take no part in the process of producing the wealth. The analysis of the Socialist shows that the capitalists, who own an enormous mass of wealth, are able to obtain this wealth by the robbery of the other class in society—the working class.

Having no property in the means of wealth production the members of the working class are compelled to sell their energy to those who own the various tools of production, in order to obtain the wherewithal to live. It is by means of the workers applying this energy to nature given material that the wealth necessary to human existence is produced. But the great bulk of this wealth is appropriated by the capitalists who have control of political power and consequently use that power to legalise their robbery of the working class.

There is little need to stress the fact that, contrary to the wealthy position of the capitalists, the position of the workers is one of poverty and insecurity of existence. In an earlier stage of social development man endured privation through his lack of knowledge of the forces of nature, but in modern society, with man having gained a greater control over natural forces, wealth can be produced in abundance. Starvation or a lack of the means of subsistence, although unavoidable in earlier times, is now quite avoidable. There are ample means at the disposal of modern society for all to live in economic security, free from the yoke of servitude and the exploitation and poverty it entails for the working class. The poverty and the general degradation within society we trace directly to the class ownership of the means of life.

Thus it is in the roots of society itself that the Socialist discovers the core of the "social problem”.

The Christian, however, if he is consistent with his creed, alleges that the explanation of all things, including social conditions, is to be found in that metaphysical abstraction "God”—an abstraction aptly described by Spinoza as the "asylum of ignorance.” To the Christian this world is ”God’s world." He created it, and everything in it, including man. The affairs of the world are supposed to be controlled by this supernatural power, whose activities it is blasphemy to question.

In contrast with the scientific determinism of the Socialist philosophy, which points out the overwhelming influence of material conditions in shaping human conduct, the Christian asserts that man is endowed with a free will, and he expects human conduct to take on any particular form regardless of whatever conditions are prevailing. Hence, while the Socialist relies upon a change of political and economic conditions for human improvement, the Christian calls for "a change of heart.’’ In contrast with the policy of the Socialist, who urges the workers to resist the tyranny of their exploiters, and to organise themselves for the overthrow of class domination, the Christian urges the policy of class conciliation. The poverty stricken worker is to shake the hand of his wealthy exploiter, and “Capital and Labour” are to live in harmony. Instead of the end of classes we are to have their continuance under the cloak of “Christian brotherhood.”

The method of the Socialist—i.e., the method of explanation through natural causes is therefore in striking contrast with the method of the Christian, who seeks the explanation through the mistiness of super-naturalism. It is claimed by many who attach little or no importance to the supernaturalism of Christianity that the ethics now associated with that religion are of the essence of Socialism, but only ignorance or deliberate misrepresentation can give rise to the claim.

Throughout the history of societies composed of classes the various ethical codes have been those best suited to the interest of the particular ruling class, and imposed upon the lower orders as a means of government. The ethics of Christianity form no exception to this rule; they are slavish ethics, and as such have been an assistance to government in the hands of rulers throughout Christendom.

It is fairly obvious that for any religion or ethical code to be adopted by the ruling class it must conform to its interest, and the fact that Christianity, with its slavish ethical code, has been a State religion for centuries, is in itself sufficient to merit the serious attention of the student of sociology. Christianity first became a State religion in the slave conditions of the decaying Roman Empire, in an age that is described by Professor Seeley as a religious age, "because it was an age of servitude.” Many historians concur in the view that it was the cardinal ethic of submission which influenced Constantine, the Roman Emperor, to embrace Christianity.

After its recognition by the head of the Roman Empire, the progress of Christianity proceeded apace throughout Western Europe, and its progress can be explained largely by its utility as an aid to government.

The student of history will find that Christianity, like all other religions, has been utilised against the lower orders whenever they have rebelled against the tyranny of their rulers The scriptural 'injunction of “Servants obey your masters,” has always been ready to hand to encourage submissiveness, and the “great” Martin Luther, who is held up by the Protestants as a light of liberty, demonstrated how this injunction serves against the subject class. When the peasants of Germany rose in revolt against their exploiters in 1525, Luther addressed the nobles and princes as follows :

“Inasmuch as they are evil minded and brazenly refuse to obey, and furthermore, resist their masters, they have forfeited life and soul as do all faithless, perjured, mendacious, disobedient knaves and villains. Therefore it becomes the duty of all here to strangle and stab, secretly or publicly, all such, and remember that there is nothing so poisonous, injurious and fiendish as a rebellious person. Just as you would kill a mad dog; if you do not strike him he will strike you, and with you the whole country.” (Quoted, by Gustav Bang in his ‘‘Crises in European History.”)

It is useless for our Christian apologists to claim that Luther and his like acted in contravention of "true Christianity.” For in every case of the votaries of Christianity using their influence to crush rebellion they stood upon the "authority of the Holy Bible.” The doctrine of non-resistance to evil is one of the chief tenets of the Christian religion, and was taught by its titular founder and his chief apostle Paul. The latter, in his various epistles to the Romans, Corinthians, Ephesians, etc., at all times enjoined the slaves to be obedient to their masters "in fear and trembling,” and to give them the same submission as they gave to Christ. Thus it is clear that the ethics of Christianity with their slavish characteristics are utterly out of harmony with the revolutionary principles of Socialism. Even the much lauded "Golden rule," although no monopoly of Christianity, since it was preached centuries prior to the advent of that religion, and is to be found in most ancient religions and philosophies, is useless to the workers as a means of their social advancement. Those who dominate society cannot be removed from their social position by the preaching of ethics; they can only be removed as all other ruling classes have been removed, i.e., by the reins of government being taken from their control by another class gaining power.

With regard to the different concepts of life between the Socialist and the Christian. The latter can only regard the world as a “vale of tears,” and this life as a painful preparation for a life we are supposed to live hereafter. It is an essential part of Christian teaching that the affairs of this life are as nought compared with the promised life beyond the clouds, and consequently we are enjoined to despise earthly things, to reap our reward in heaven. Of course, the Christian in practice treats earthly things much in the same manner as do non-Christians, but we are concerned here not with his actions but with his teaching. To the Socialist, the affairs of this life, the only life we know of, are of the utmost importance, and our concern is to make it as pleasurable as possible. As indicated above, there are ample means at the disposal of mankind to-day for all to live, in economic security and in healthy social surroundings. But such a condition of affairs will not be accomplished by preaching ethics, whether religious or secular, it will only materialise by the waging of the class struggle in which the workers must be backed up by a sound knowledge of the forces that lead to their emancipation from wage slavery. The workers must realise the fact that, in the words of Marx, "Religion is the opium of the people”; it has been the chloroform in the hands of parasites, throughout the history of class domination, and inasmuch as it has any influence in modern society, it acts as it is its nature to act, as a conservative force, aiming to preserve the traditional illusions of the dead past, as obstacles to the needs of the living present, and the future. Christianity, like all religions, has been driven from every field of science, and since Socialism in philosophy is science applied to society, Christianity can find no logical place in the Socialist philosophy. We Socialists take our stand upon the firm basis of positive science explaining social conditions, and, in fact, all things within the scope of our knowledge, by purely natural causation. Thus, the materialistic movement of Socialism is seen to be utterly opposed to the false idealism and supernaturalism of Christianity. Socialism alone, with its recognition of the supreme importance of material things, can accomplish for the workers what Christianity and its slavish morality assists to retard. We know that economic evolution and the self- interest of the working class are inevitably preparing the path for that great social change, when the workers of the world will enjoy the fruits of their labour in a system of society based upon the common ownership and democratic control of the means of wealth production and distribution by and in the interest of the whole community; a system of society known as Socialism.
Robert Reynolds.

More often than not Reynolds wrote under the pen-name of 'Robertus' - probably for work related reasons - but this article was signed off as R. Reynolds.