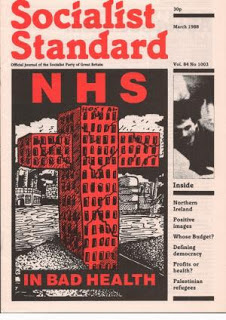 This month, two interesting letters raise the same question of how socialist society will deal with violent individuals. We hope our reply covers the point in both letters, their other points are dealt with separately.

Whilst heavily in support of the aims of your party, I am concerned about the treatment of criminally disturbed persons in your envisaged society, whilst right in your condemnation of the media hype following the events in Hungerford in August 1987. I would like to know how the SPGB sees a Socialist society handling anti-social elements such as habitual drunk drivers or gun-wielding "madmen" without resorting to coercive organisations such as a Police or Militia. (I do realise that in a society of production according to need the pressure to drink to excess would be highly reduced.)

I would also like to raise the matter of professional competence, in a recent (November) issue you talk of an after-shave brewer deciding to grow bananas, are we to take it that the SPGB thinks that anyone could tackle any job in a Socialist society just because they think themselves equal to the task. e.g. engine driver or civil engineer say? I know that the current professional bodies exist to maximise the wages of their members, but I'm also glad to know that the chap who designed the Tay bridge knew what he was doing whenever I cross it.
Yours for Socialism.
Jonathan Drane
Newcastle-upon-Tyne

I subscribe to your excellent magazine and can find no fault with your arguments (as an ex-Green Party member I particularly enjoyed the "green" issue) but 1 do have three questions:

Reply
First, our comments on the question of restraining violent people in socialism:
Capitalism is highly selective in its definition of people who are "anti-social" and "criminally disturbed”. If the Hungerford killer had sprayed his bullets indiscriminately among Argentinian soldiers in the Falklands he would have been a national hero. Yet the motivation, the state of mind and the preparation for such acts are often similar. Much "anti-social" behaviour now is really a desperate response to the demands which capitalism makes on us; in many cases it is healthier than a docile acceptance of the indignities of wage slavery. Many human beings can't cope with the repressed. exploited, deprived lives they are forced to lead. They rarely respond as catastrophically as at Hungerford; more typically they haunt their doctor's waiting room, or their local pub or, in extremity, roam the grounds of a mental hospital. Social society will be free of those pressures, which means that most of the "bad behaviour" which is now an everyday occurrence will not happen.

But what about the few who, after all this, will cause problems? How big a problem would this be? Today, only a very small percentage of the people in prison are there because they have committed crimes of violence and of these an even smaller proportion are a danger to the public. Socialist society would be such that even that small number would be even further reduced so that, if the problem was present, it would apply to very, very few people — those who could not be absorbed and coped with through the care of the community. Without doubt, those few would have to be restrained but society's interests would demand that they be treated as the sick people that they are and the places where they are held would reflect that. Unlike the police, the military, the prisons today, this would all happen through majority will, with society's full participation and concern.

On Jonathan Drane's point about professional competence:
The function of much "professionalism" is to surround the "profession" with a mystical defence to conceal the fact of the professionals' fallibility (not every example of civil engineering endures like the Tay bridge). This is an inevitable result of the fact that "professionals" just like everybody else need to sell their labour power to an employer and to the fact that they engage in the production of wealth and services which are for sale with a view to profit. Thus "professionalism" is often aimed at separating the “professional" from the people who experience the results of it — the people who might for this purpose be called consumers. None of this will apply in a socialist society, where production will be a harmonious, cooperative effort. Socialism will be a sane society; it will of course recognise that certain jobs demand special knowledge and experience but those who have that knowledge will not be privileged, apart from the rest.

On Michael James' questions about religion and socialism in one country:
Socialists do not believe in god or in any supernatural influences (neither, strictly, do we "believe in" socialism; we advocate a social system based on common ownership of the means of life because the evidence proves that this is the best way of running modern society). There is no evidence for the existence of god; the only logical and consistent explanation of the world and what happens in it must have a material basis. Socialists affirm that this life is the only one we know of and to preoccupy ourselves with some other existence, outside the known and the material, would divert us from the task of dealing with capitalism's problems by establishing a different system.

Socialism will develop out of modern capitalism; it can't come from any earlier social system. Modern capitalism's interlocked economy and communication means that no one part of it can be self-reliant. For example, what would a "socialist country" do about international travel and safety systems7 Would it refuse to take part in them? Would it refuse to take advantage of developments in productive techniques or medical science in the capitalist part of the world? If not. how could it preserve its socialist nature when dealing with capitalism? Socialism will be a matter, not of just self-sufficiency but of abundance, of full and universal co-operation and participation in all that the world has to offer the human race.

Our brief replies may not do full justice to the questions raised in these interesting and encouraging letters. We urge Jonathan Drane and Michael James to visit their local branch of The Socialist Party. They will be warmly welcomed and have full opportunity to discuss their ideas.
Editors

I have read with great interest your set of principles. and would further like to know the answers to the following points:

Reply
Socialists aim at the democratic capture of political power, as this is the only way of taking over the state machine and so changing it from capitalism's army of class coercion into an "agent of emancipation", This will entail the election of delegates, by a conscious socialist majority, to the places where the state machine is controlled in this country parliament, in America Congress and so on. That is why we are a political party and not, as some people mistakenly believe, an educative organisation.

As socialism cannot be set up separately in any part of the world it follows that it must be established world-wide and, to all intents and purposes, at about the same time everywhere. This is perfectly reasonable; our ideas are formed through our material conditions and are therefore at pretty well the same stage of development all over the world. In particular the working class in all countries have the same attitude toward the vital question of carrying on with capitalism: they all fall for the same diversions into futile reforms and politicians' promises. Just as capitalism now receives this universal support, so will the ideas of socialism.

With all the incentives to work in socialism it would be only a very, very small minority who might, for some reason, choose to stand aside from the hugely exciting and satisfying task of producing to meet human needs. If there were such people, refusing the opportunities to realise their full potential as human beings, society could easily carry them in their unhappy condition. After all, a massive amount of capitalism's knowledge, energy and resources is now wasted in unproductive effort salespeople, accountants, lawyers, police, armed forces and so on.

Much "dirty" work would easily be eliminated in socialism; all that stands in the way of this at the moment is capitalism's priority for profit above human welfare. Socialism's priorities will put human welfare first. Any such work which could not be eliminated would, we are confident, find no lack of volunteers. Since it would be essential to human society that it be done it is not conceivable that, having established socialism, people will then damage that society by refusing to do necessary work.

Paul Weston's questions are interesting and worthwhile. He would be welcome at The Socialist Party branch in his area, where he could discuss his ideas more fully.
Editors

Email ThisBlogThis!Share to TwitterShare to FacebookShare to Pinterest
Labels: 'Experts', Futurology, Human nature and violence, Letters to the Editor, March 1988, Massacres, Mental Health, Objections to Socialism, R1988, Socialism as a Practical Alternative, Who will do the dirty work?