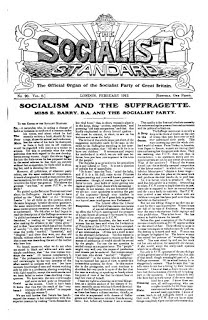 From the February 1912 issue of the Socialist Standard

An early article by Paul Lafargue

Readers know the circumstances in which Paul Lafargue and Laura Marx have ended life together, with their last words expressing their belief in the early triumph of the cause for which they laboured. We bow before death. Nevertheless we rejoice that, although Lafargue has laid down his pen, his words still fight on behalf of the workers. The following article, written in “L’Egalité” of June 2nd, 1882, is still trenchant and useful.

At the present moment a kind of Socialism for the capitalists is being created. It is very modest. It contents itself with the transformation of certain industries into public services. Above all, it does not compromise one. On the contrary it will rally a good number of capitalists.

They are told: Look at the Post Office, that is a Socialist public service, functioning admirably to the profit of the community, and more cheaply than if it were entrusted to a private company as was formerly the case. The gas supply, the railways and the building of workmen’s dwellings must also become public services. They will function to the profit of the community and will chiefly benefit the capitalist class.

In capitalist society, the transformation of certain industries into municipal or national services is the last form of capitalist exploitation. It is because that form presents multiple and incontestable advantages for the bourgeoisie that in every capitalist country the same industries are becoming nationalised (Army, Police, Post Office, Telegraphs, the Mint, etc.).

Certain monopolised industries, indeed, delivered up to the greed of private companies, become instruments for the exploitation of other sections of the capitalist class, and so powerful that they disturb the whole bourgeois system.

Here are a few examples. The electric telegraph, on its introduction into France, became a state service because the political interests of the Government required it. In England and the Unites States, where the same political interest did not exist, the telegraphs were established by private companies. The English Government was compelled to buy them out in the interests of all, particularly the speculators, who in the transformation found means of obtaining scandalous profits. In the United States the telegraph service is still in private hands. It is monopolised by a gang of speculators who control the entire Press of the country. Those speculators communicate telegrams only to newspapers in vassalage to them, and which must pay such a heavy tax that many, being unable to bear such a burden, do without telegraphic news altogether. In America telegrams are the most important part of the newspapers; to deprive them of these dispatches is to condemn them to languish and die. In that republican Republic, which individualist Liberals take as the ideal of their most daring dreams, the liberty of the Press is at the mercy of a handful of speculators, without government force and without responsibility, but in control of the telegraph service.

The railway monopoly is so exorbitant that a company can ruin at will an industry or a town by differential or preferential tariffs. The danger to which society is exposed by the private ownership of the means of transport is so keenly felt that in France, England and the United States, many capitalists in their own interests demand the nationalisation of the railways. In capitalist society a private industry only becomes a State service in order to better serve the interest of the bourgeoisie. The advantages which the latter obtain are of different kinds; we have just spoken of the social danger created by the abandonment of certain industries to private exploitation, dangers which disappear or are attenuated as soon as the State directs them but there are others.

The State, by centralising administration, lessens the general charges; it runs the service at a smaller cost. The State is accused of paying everything more dearly than private enterprise; nevertheless, such is not always the case when there is a question of the establishment of means of communication, one of the most difficult and complex enterprises in modern society. Thus the tramways constructed in France have, with rare exceptions, cost an average of 250,000 to 300,000 francs per kilometre as a first establishment charge. The railway from Alais to the Rhone has eaten up per kilometre of line a sum of about 700.000 francs. M. Freycinet, who is not a bourgeois director for fun, has established upon positive grounds that the State could construct railways at a cost of 200,000 francs per kilometre. The State can therefore sensibly diminish the prices of the services it exploits. It is the capitalists who profit by the reduction, because it is they, principally, who make use of them. Thus, what a number of workmen only use the postal service once or twice a year! And how very numerous are the commercial houses and industrial concerns which send out over ten and twenty letters a day!

State services become a means to politicians for placing their tools or dependants, and for giving good, fat sinecures to the sons-in-law of the bourgeoisie. M. Cochery has accorded lucrative posts to Orleanists; among others, to the son of Senator Laboulaye, the man of the inkpot.

Militants of the Parti Ouvrier may and must in their polemics against the public men and the politicians of the capitalist class, make use of this transformation of one time private industries into State services, to show how the bourgeoisie themselves are led by the logic of events to attack their own principles, which demand that society, represented by the State, snatch no industry from private initiative. But they must not desire, and still less demand, the transformation of fresh industries into national services, and that for diverse reasons.

Because it is to the interest of the workers’ party to embitter the conflicts which lacerate the capitalist class, instead of seeking to pacify them – these antagonisms quicken the disorganisation of the ruling class; because nationalisation increases the corruptive power of capitalist politicians; because State employees, like workers in private employ, strike and engage in a struggle with the exploiters.

The only Socialist reason that one might put forward for that transformation is that perhaps it might simplify the revolutionary work of expropriation by the workers’ party; we will examine this on another occasion.