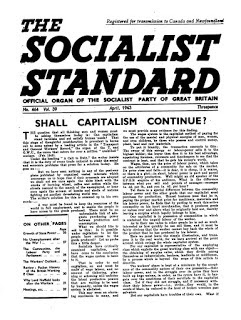 From the April 1943 issue of the Socialist Standard

The question that all thinking men and women must be asking themselves to-day is: Can capitalism stand inviolate and yet satisfy human needs? That this stage of thoughtful consideration is prevalent is borne out to some extent by a leading article in the "Transport and General Workers' Record," the organ of the T. and G.W.U., the union that caters for over a million "unskilled" workers. (Feb. 1943).

Under the heading "A Call to Duty," the writer insists that it is the duty of every trade unionist to study the social and economic problems that press for a solution to-day. He goes on:—


But we have seen nothing in any of the post-war plans published by organised vested interests which encourage us to hope that if their proposals are adopted we shall not see once again the skies black with the smoke of burning wheat, coffee and cotton while the streets resound to the march of the unemployed, or hear once again the scream of bombs and shells of nations fighting yet another devastating world war.

The writer's solution for this is summed up in his own words :—


A way must be found to keep the resources of the world in full employment, and to enable the people to have access to the goods produced. There must be an unbreakable link of adequate purchasing power between production and consumption.

What we should like to ask is this: Is it possible under capitalism to let the people have access to the goods produced? Let us probe this a little deeper.

Socialists have critically examined capitalism, and have come to the conclusion that the wages system is basic to it.

That in order to end capitalism, an end must be made of wage labour, and no amount of tinkering, planning or scheming will unfetter the latent productive powers that are waiting to be used by humanity, unless the wages system is abolished.

This may seem an alarming conclusion to many, and we must provide some evidence for this finding.

The wages system is the capitalist method of paying for the use of the mental and physical energies of men, women, and even children, by those who possess and control money, plant, land and raw materials.

To put it bluntly, the transaction amounts to this: The owner of this energy or labour-power sells it to the highest bidder; the buyer then rises it to his best advantage, appointing foremen, overseers and timekeepers to see that the contract is kept, and that he gets his money's worth.

Wages, then, are the price of labour power, which takes on the attributes of a commodity for sale on the market. Its price rises and falls—it is dear, it is cheap, it is scarce, or there is a glut—in short, labour power is part and parcel of commodity production. Well might an old speaker of the S.P.G.B. enquire of his audience. What is the difference between what you sell and pounds of sausages—sausages 1s. 4d. per lb., and you 1s. 4d. per hour?

Yet there is a special difference between the commodity labour power and the other goods that our capitalist must purchase for production. Honest business man that he is, paying the proper market price for machinery, materials and his labour power, he finds that by putting to work this active commodity on his inert merchandise, that it produces goods or values over and above what he originally laid out, thereby leaving a surplus which legally belongs to him.

Our capitalist is in possession of commodities in which is contained the unpaid labour of the worker.

As to their use value to other people he is not so much interested as how quickly he can sell them, and it must be fairly obvious that the worker cannot buy back the whole of the product that he has produced by his labour.

Here we must leave the simple illustration, and transpose it to the real world, for we have arrived at the point around which swings the whole capitalist system.

For our capitalist is representative of the employing class which exploits the great working class with one object— the obtaining of surplus value, which they divide among themselves as industrialists, bankers, landlords or middlemen, by a process which is beyond the scope of this article to describe.

The workers' share is kept at a minimum by the acceptance of the commodity nature of their one possession—their labour power, and in the struggle over its price they have built up huge unions, in order, as the cynics have it, to bargain over the conditions of their servitude to the capitalist class. Yet if they did not struggle, and if necessary withdraw their labour power—i.e., strike—they would, in the words of Marx, be reduced to the level of broken wretches past salvation.

But our capitalists have troubles of their own. What if they cannot sell their commodities? Contained in the mass of products in capitalist hands, there is, when sold, not only the income they seek, but the new capital to repeat the operation we have described. This is where the trouble starts, for capitalist production is not an isolated phenomenon but is world wide, and the "world markets" are the possession of those who can sell the cheapest. They can reduce prices by more than one method; they can reduce the cost of labour power, increase the intensity of labour, instal labour-saving machinery, lengthen the working day, obtain cheaper raw materials, or keep rivals from obtaining same.

A tendency in this we must note is that capitalism to-day is organising not as a "private enterprise" agglomeration, but as national units, which speak and trade for their capitalists as a body.

Every so often, as has been seen, there comes a "depression." The markets are "glutted," and the first action of capitalists is to reduce the buying of labour power, so then its unfortunate owners must walk the streets unemployed, sustained by grudgingly given doles or charity. Nor can the capitalist give away the products he cannot sell, even if he wished to, for not all have their capital in "means of subsistence," which is what our worker needs in the shape of clothes and food. Many are engaged in producing "means of production," such as factories and heavy engineering; furthermore, they would by such methods knock the bottom out of prices, thereby rendering capitalism further inoperative.

The usual practice is to let their commodities lie up, and often rust if they be ships or plant, and even make bonfires of such things as wheat or cotton.

Having brought the reader so far, it does not need any great imagination on his or her part to understand that a prolonged stalemate on the part of world capitalism can easily lead the competitors to settle the question by force of arms—by war. Therefore to let the people have access to goods produced, there is only one way: let the people own and control all the means of production and distribution, producing everything solely for use instead of for sale and profit.

Well might Marx, that guide and thinker, begin his classic "Capital" with the words: "The wealth of those societies in which the capitalist mode of production prevails presents itself as an immense accumulation of commodities." For in this prosaic opening is contained for Man, as for us, the crux of capitalist production, and to-day, 60 years from his death, there is no working class in the world that has abolished commodity production—has, in other words, established Socialism, where the buying and selling of labour power has ceased, where the link of "purchasing power " is abolished as a capitalist device.

We as the only Socialist party in this country hope for the day when the mature advice of Marx is heeded, and trade unionists write upon their banners, not a fair day's work for a fair day's wage, but the abolition of the wages system.
Frank Dawe
Posted by Imposs1904 at 12:08 AM