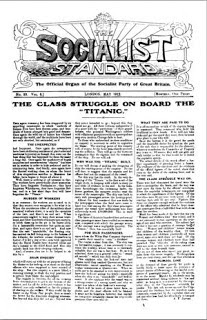 Once again humanity has been staggered by an appalling catastrophe, in which hundreds of human lives have been thrown away, and hundreds of homes plunged into grief and despair. Once again the wild cry of horror has vibrated through the world, and the multitude have been not only shocked, but astounded, as if the unexpected had happened. Once again the newspapers have been slobbering sentimental platitudes and unctuous hypocrisy as though this were not the best thing that has happened for them for many a long day. Once again the machinery of bogus inquiries and sanctimonious “charity” has been set in motion in order to hide awkward and incriminating facts. And finally, once again have the flouted working class, on whom the brunt of this stupendous sacrifice to Mammon has fallen, begun to forget all about it.

Well, there is nothing at all unusual in that. The workers have proverbially short memories. They have forgotten Featherstone; they have forgotten Whitehaven, they have forgotten Bolton, and in a few short days they will have forgotten the “Titanic”. Murder of workers is so common; the workers are so used to it, that they cannot even recognise it for what it is. When the murderous rifles of the soldiery shoot unarmed workers down, it is only the operation of the Law, and there’s and end on’t. When mine-owners neglect to keep their mines ventilated, and blow hundreds of miners into eternity, or brick them up in the pit to be burnt alive, it’s a lamentable occurrence but quite an accident, and again there’s an end on’t. And now that the vast “unsinkable,” the floating city, has carried its full living cargo to the bottom of the Atlantic, the workers arouse themselves in horror of it for a day or two, note with approval that the Royal Family have donated about one day’s income to the relief fund, and then slip quietly back into their sleeping sickness.

And, of course, they are to be helped to do this by a sham enquiry which will start out with the set purpose of fixing the blame on the iceberg, or at most on the dead officers who were supposed to have control of the ship. But this enquiry is a mere blind, a cunning attempt to cloak the real position and to screen from blame the real culprit.

The enquiry in America, for all its seeming fierce determination to get to the bottom of the matter, and for all the awkward evidence it has elicited, was only embarked on for the purpose of skating on the surface. If they could fix the blame on the White Star people, then so much the better for the American shipping interests. But beyond this they did not go; beyond this they never intended to go; beyond this they dared not go. All their virtuous indignation is of a piece with the “patriotism” of their grandfathers, who poisoned Washington’s soldiers with villainous provisions with an unscrupulousness even modern Chicago fails to beat.

To those who understand modern conditions no enquiry is necessary in order to apportion the blame. The starting point of this enquiry will, of course, be the hour immediately preceding the collision. They will go on the worn-out assumption that the captain had the command of the ship. No one will ask why was the “Titanic” built. No one will dream of making the designing of the ship the starting-point of the enquiry. No one will dare to suggest that the captain and his officers had not the command of the vessel.

Yet this way lies the truth. In the very designing of the “Titanic” is the first word of the tragic story, in keeping with which is every jot and tittle of evidence to the end. In the luxurious furnishings—the swimming baths, the flower gardens, the racquets courts—read the secret of the catastrophe. The ship was built to carry rich passengers across the herring-pond.

Almost the first comment that was made by the newspapers when the fatal news came to hand was that among the first class passengers aboard the vessel were millionaires who were collectively worth £30,000,000. This in itself is significant.

The fares of those six hundred first and second class passengers must have totalled an enormous sum, compared with which the passage money of the steerage was a negligible quantity. The “Titanic,” then, was essentially built for rich passengers upon whom the White Star Company depended to enable their vessel to “earn” a dividend.

The course is clear from this. The ship was on her maiden voyage; it was necessary to convince the wealthy, whose time is so extremely valuable, that she was a fast boat. So, as it is admitted, there was a general order to “smash all records”—which was duly done.

This explains why the look-out men had glasses until they reached Queenstown, but not afterwards-record smashing on the Western voyage commences at Queenstown. When records are to be smashed it is very inconvenient to have the look-out seeing too much—especially when the ship is an “unsinkable” and well-insured. It also explains why the vessel was on a wrong course at a wrong speed, and why no notice was taken of the look-out’s warning.

Much will be made of these latter facts, no doubt, and the dead officers will be blamed. It must not be forgotten, however, that capitalist companies invariably choose for responsible positions those men to do what they are paid to do. It  is all moonshine to talk of the captain being in command. They command who hold is livelihood in their hands. If we will not take risks and get the speed they want, then he must give place to one who will.

So at the bottom it is the greed for profit and the insatiable desire for speed on the part of the rich that is responsible for the disaster, whatever conclusion the Committee of Enquiry may come to. Of course, they will not give any such verdict as that, for that would be to indict the capitalist system.

The actual details of the wreck afford a further opportunity of pressing home a lesson. The evidence of the survivors and the evidence of the official figures of the saved, show that even on the decks of the sinking liner, and to the very end, the class struggle was on. Those who had clamoured for speed were the first to monopolise the boats, and the way was kept open for them by the officers’ revolvers. Even the capitalist newspapers are compelled to admit the significance of the figures. Of the first class men 34 per cent. were saved: of the steerage men only 12 per cent. Figures like those are eloquent enough without the evidence of the officer who admitted that he kept steerage passengers from a half-filled boat with shots from his revolver.

Much has been made of the fact that the cry “Women and children first” was raised, and it is not necessary to cast aspersions on the courage of any man who survives. The salient fact is that it was not a question of courage but of class. “Women and children” meant women and children of the wealthy class. Of first class women and children practically all were saved, some even with their pet dogs. Of the steerage women and children more than half perished. The “chivalry” of the ruling class does not, save in very rare instances, extend itself to the class beneath them.

We are not of those who expect any great results from this ocean tragedy. Working-class lives are very cheap, and the age that abolishes the Plimsol Line at the demand of those greedy for profit is hardly likely to insist upon the provision of proper means of life-saving or the careful navigation of passenger vessels. Murder by wholesale may be committed without doing violence to “law and order,” so long as it is committed by the capitalist class in the “legitimate” scramble for profits. The law only moves against the Crippens and the Seddons, but the murders quite commonly committed by the capitalist class are not one whit less foul, for all nobody is hanged for them.