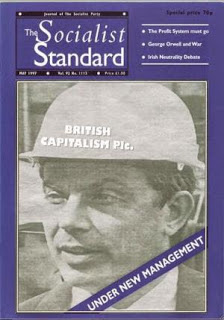 From the May 1997 issue of the Socialist Standard


Dave Perrin continues the series of articles describing why capitalism is a reactionary, decadent social system ripe for overthrow.

Socialists contend that capitalism is a politically decadent and obsolete social system, wracked by periodic world crises, constant warfare and characterised by unprecedented inequality and exploitation. Having brought about a huge development in the forces of production unparalleled in human history, it has proved itself incapable of utilising its vast resources and technologies properly. Capitalism’s method of distribution is in open rebellion to the vast productive forces built up over the last two centuries, because the market and the profit motive are no longer a stimulus to progress as they once were, but a barrier and fetter.

The market economy has carried out its historic mission of providing the technical conditions for the establishment of a new, higher, social order based on common ownership, democratic control and production for use. Indeed, scarcity should no longer be a problem for the human species: free access to wealth can replace the fetter of the money system and its outdated categories of profits and wages, so that human needs, desires and potentialities can at last be fulfilled in a world of material abundance. But until the working class of wage and salary earners organises itself to put an end to the absurdities of the market economy, capitalism will continue, and the owning class will reap the benefit.

The twentieth century has been an era of growth in global inequality, of world economic crises and world wars, and yet capitalism continues to stagger on even though the basis for its continued existence — working class support — is undermined more and more by the dynamic of capitalist development. Nothing provides a better example of this than the development of capitalism in the industrialised countries over the last 30 years or so.

Surplus value
The most significant economic phenomenon in the major capitalist economies in recent decades has been the decline in the number of workers directly producing surplus value (rent, interest and profit) for the capitalist class, together with the massive and concomitant growth in the number of unproductive workers and expenditure in the economy. In a country like Britain those engaged in manufacturing production — where the vast bulk of wealth and profits are created — has halved during the last 30 years so that today barely 4.5 million work in manufacturing. This is not a phenomenon exceptional to Britain, and it has led to a massive attempt by the capitalist class to increase the rate at which the remaining workers creating surplus value are exploited. It has not, however, entirely succeeded.

While workers are more heavily exploited than ever before, giving more and more unpaid labour to their bosses, profit rates are barely two thirds of what they were in the 1950’s, 60’s and early 70’s for the major capitalist powers. What is worse is that the burden of necessary unproductive expenditures has at the same time risen in nearly all capitalist states with higher welfare bills, huge demands on state pensions and rising state expenditure generally — expenditure which in the last analysis has to be financed from profits. The result has been a massive squeeze not just on the ‘headline’ rate of profit, but the real rate of profit after tax. Privatisation of state concerns eased the pressure of this problem for a while in the 80’s, but in most states including Britain that is a temporary tactic which is already worn out. The economic significance of this trend has been profound and it is a phenomenon which has in many ways dominated economic thinking and policy making since the early 1970’s whether on tax or health service expenditure.

But its importance for the capitalist system and the workers who suffer under it has not been purely economic at a social level capitalism is now in serious crisis and it is this squeeze on profit rates which has played a more important part than anything else in bringing this situation about.

Social decadence
The drive to maintain an adequate rate of profit has increasingly led to a situation where money and commercial considerations have intruded into more and more human activities. Far from capitalism extending sectors of the economy where goods and services are given away free e.g. in health care or transport, the market economy has spread its tentacles everywhere. There is barely a human activity, good or service left which does not now have a price. Everything has become a commodity and the bottom line revolves around cost and profit

A whole host of reformers from the Labour Party to the Trotskyist movement have been proven wrong about the ability of the capitalist state to provide resources based on need rather than ability to pay. The ultimate source of all state finance is surplus value, and when profit rates fall during economic crises and when the burden on profits rises in the form of added demands on the state to ease poverty, unemployment and provide health care, then commercialisation and cutbacks proliferate.

When forces like these are unleashed — as they have been across the world over the last 30 years or so — they have profound social consequences. In particular, the social and moral codes which developed alongside the rise of the capitalist class during the system’s ascendancy have been undermined. The nuclear family, the bourgeois work ethic and the sanctity of private property have all taken a battering under pressure from the rampant and ruthless individualism unleashed by the market itself. For any system of society to survive and prosper it needs its own codes and regulations of behaviour, but those that developed within bourgeois society are now being ceaselessly undermined by the market, the profit motive and rampant competition, yet another example of the contradictions of the capitalist system.

No sector of society appears more worried by this phenomenon than the capitalist class. Capitalism the world over is in economic and social crisis to varying degrees and yet all their old so-called ‘solutions’ are played out — state intervention, nationalisation, Keynesian economies, monetarism, protectionism … it is a long list. Today the capitalist class has nowhere to go except market forces, market forces and more market forces. And yet it is these very same market forces — the only ‘solution’ the system comprehends — which are undermining the entire social cohesion of bourgeois society. Every other columnist in the serious newspapers sings from the same hymn sheet — “society is falling apart — what can be done?”

At present, society is in deadlock. The capitalist class have no perspective to offer society other than even more of that which is causing the problems. And for its part the working class has been unable to implement its own historic solution to the contradictions of capitalist society – socialism. The result of this situation on the political field is a form of political stalemate, and on the social level the descent of capitalism not just into the type of political decadence already discussed, but a very real social decadence too. Society does indeed seem to be rotting on its feet, and nobody has been able to do anything to stop it.


It is in these ways that capitalism is undermining the principles and continued existence of collective life. Social decadence has eventually followed on from political decadence and all the signs are that it will continue and probably deepen, for there are few if any forces or tendencies within capitalism operating in the opposite direction. Filling the prisons is no long-term solution on many grounds, not least of which is cost, and no government following this line has yet really succeeded in reversing the process which the market has started. None of the TV evangelising by Tony Blair or political appeals to “family values” are likely to succeed either as the very continued existence of capitalism and the forces it has unleashed make that near impossible. Appealing to some sort of higher morality or set of values within the context of the market is clutching at straws, a long way from a considered and practical response to the problem. If the social decadence infecting society is to be overturned it has to be tackled at source — and that means the abolition of the market and the poisonous relationships which spring from it.

That's all of the May 1997 issue of the Socialist Standard now on the blog.