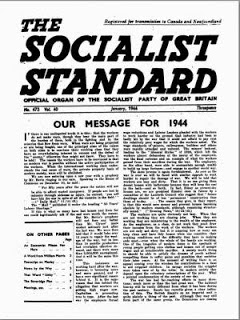 From the January 1944 issue of the Socialist Standard

A recent Court of Appeal decided that housekeeping savings belong to the husband.. This decision aroused indignation amongst many women; but why? The judge was right. A worker's wife is little better than a chattel-slave, though it is perhaps true that love enters into marriage more to-day than it did in the past.. Yet the economic bondage of women remains fundamentally the same.

We live under a system of society known as Capitalism, which is made up of property relationships, one of which is marriage. In order to live, a working-class woman must either sell her labour-power to an employer, secure a husband or resort to prostitution. If she chooses marriage, as nearly all women do, she will receive in return for her services food, clothing and shelter according to her husband's means.

As the majority of men are propertyless, they are compelled to .sell their labour-power to the capitalist class, who in return provide them with the means to keep themselves in a state of efficiency and also to maintain a wife and family. Most work is regarded as unskilled, therefore the means which the majority of men receive are simply for the necessities of life.

So women who marry these men are forced to live in poverty, and the very idea of saving any of their housekeeping money is ludicrous. In view of this we can conclude that for these women to enjoy equality in this state of poverty is impossible, for they are dependent on the goodwill of their husbands. The end of the exploitation of women will only come when they unite with men to abolish capitalism, which enslaves them both, and substitute it by socialism,, under which no one will be economically dependent on another and all will enjoy complete freedom and equality.