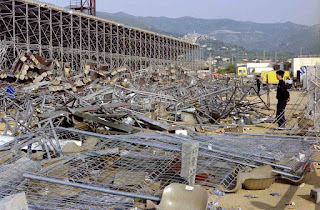 From the June 1992 issue of the Socialist Standard

“I have done it again.One year in every ten I manage it.” (Sylvia Plath).

Sadly, one year in ten is not frequent enough for the exploiters of the public’s taste for football to draw blood in their pursuit of profit. Three years, almost to the month, after Hillsborough we have what appears to be an action replay. Once again a cup semi-final; once again avoidable casualties; once again preposterous attempts at victim-blaming; once again inadequate medical provision.

Let us make no bones about it—the Furiani stadium bloodbath in Bastia was caused by the profit motive proving too strong for the authorities to adequately consider safety aspects which most of us would regard as more important. Like the ram-raider who causes damage ten times worth what he steals, they couldn’t resist the temptation to sell 10,000 more tickets even though they must have known there was a grave risk in erecting a temporary stand for such a game.

That they knew is (at least circumstantially) evidenced by the fact that warnings were given to the crowd not to stamp in unison in that stand. The outrageous suggestion that you can expect a cup-tie crowd to behave like a chamber concert audience insults the intelligence of all but the dourest apologists for unbridled capitalism.

The parallels with Hillsborough continued when we saw the players taking down the perimeter fencing which, if there had been a quite understandable panic in the crowd, would have prevented their escape to safety.

The emergency services, to their credit, were fairly quickly on the scene at Furiani but hospital facilities for the dying and injured were far from close to hand. The nearest hospital was five kilometres away in the mountains and utterly incapable of coping with the scale of the disaster.

Again, as at Hillsborough, the dignity of the plain people of Bastia made a sharp contrast with the posturing of those in charge. The same newspaper which shows a crippled victim of the disaster attending the funeral of one of the dead reports that efforts were being made to stage a makeshift cup-final between Monaco and Marseille. The chief consideration in the timing of this event appeared to be when it was convenient for Mitterrand to grace the proceedings with his presence.