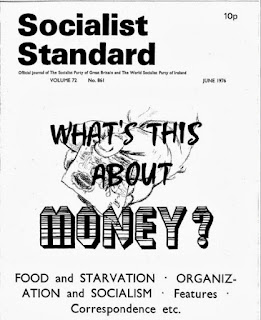 From the June 1976 issue of the Socialist Standard

Further shattering revelations by the BBC! First, the programme on “Where Keynes went wrong”. Now, the documentary on Gold. The Radio Times of 24th April said plaintively:


Why do we dig gold out of a hole in the ground, carry it across the world, and bury it in other holes, with guards over it? There are millions of tons of it lying in the vaults around the world, yet nobody can touch it. How did we get into this insane situation?

Could it be that Simon Campbell-Jones (the producer) is a listener to the SPGB in Hyde Park? There, our speakers, in dealing with the absurd contradictions of capitalism, frequently refer to precisely this absurdity as the most bizarre of all: surpassing the glut of dairy produce, the millions of bricks, the wine lake, the motor-car crisis, and now the 74 laid- up super-tankers.

The programme was quite well done, even amusing in parts, but giving not the slightest hint of an explanation of this insanity, preferring to leave it at that. May we suggest a solution of this perplexing problem? First, the programme was in error in stating that gold buried in the ground by man “is quite useless and has no value”. The reason that 80 per cent. of the world’s gold is re-buried is because it does have value, not because it has none. If it had no value it would be thrown away. It has value because it contains human labour. This is the reason why it is so carefully hoarded, whether by individuals or governments.

Gold metal is preferred to everything else as a “universal equivalent” (“as the hart pants for cooling streams—so pants the Commodity for gold”, wrote Marx) because it is practically indestructible, conveniently divisible, and immediately measurable (by weight). Our original “One Pound” was a pound weight of pure silver, then ousted by gold. Bankers quickly found that it is not necessary to ship actual gold bars to settle debts. After all, its specific gravity is 19.00. Most accounts could be settled by clearing banks debiting one client against the credit of others. Paper documents, Bills of Exchange, Promissory Notes, cheques, bonds, securities, are all ways of transferring goods without any move of gold bullion.

But, however complicated and extensive, the credit system still depends in the end on gold for solvency and stability. Gold: the one commodity everybody wants, because it reflects all the others. Who has gold, has everything. Gold is real wealth—tangible, shining, weigh-able labour—its value determined, like the value of everything else, by the amount of labour it contains.

Neither is it true that “nobody can touch it”. Not so! Today’s news is that the government has spent over £2,000 millions in gold, to try to bolster the falling paper pound. Those who push it down vaults —can pull it up again. Indian peasants hoard gold ornaments, Stalin insisted on payment in actual gold bars and not paper pesetas for the arms supplied to the Republicans in the Spanish Civil War. Shylock demanded a bagful of real gold ducats in exchange for the paper promise.

What finally sparked the invasion of Russia by the capitalist powers in 1918 was not the Bolshevik “dictatorship of the proletariat” or Lenin’s red banner, but the fact that he confiscated the gold in the Czarist banks. This writer has actually been shown a wad of Czarist banknotes by a poor fellow in the south of France, confident that when the Romanoffs are back he’ll have it made.

When Trotsky was removed from the War Ministry and placed in charge of the Concessions Committee, one of his first visitors was Averil Harriman, the American banker. Harriman was proudly taken by Trotsky to the famous Lena goldfields and informed by him that “beneath that terrain was one of the richest seams in the world—and above it one of the best Communist Youth organizations in Russia”. Harriman was reported as saying on his return home that had the position been reversed he would have been ready to talk business.

When Ivor Montagu, the Communist scion of the Swaythling merchant banking family, visited the USSR to further his researches into the smaller mammalia, his father mentioned to him that they had regular confidential reports on the Bolsheviks’ gold reserve— hinting that confirmation of these would be much appreciated. The banker needed to know how much gold the Bolsheviks really had.

Capitalism has now reached the stage where even the BBC sees the absurdity: vast amounts of labour are wasted digging gold, to bury it again. But this does serve a function under capitalism; it is the real backing to the paper promise. What to do with the vast hoards of the stuff left buried by capitalism may be a problem in Socialism. Thomas More suggested that it be used for children’s toys. William Morris thought it might line lavatory pans, though porcelain is more hygienic. Apart from capping teeth, it seems foredoomed to ornamental use.
Horatio.
Posted by Imposs1904 at 5:25 PM