'Le Programme Commun': The General Election this month in France (1973) 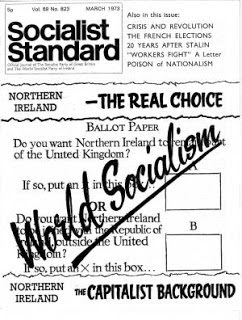 On 27 June last year a programme commun de gouvernement was signed in France between the “Socialist Party” and the “Communist Party”. These two parties, together with some left Radicals (Liberals) who later endorsed the programme, thus enter the French elections this month with a common policy which they promise to implement if elected.

In 1905 the various self-styled Socialist groups in France came together in a “United Socialist Party” under the leadership of Jean Jaurès. Adopting Marxism as its theory this party was the French equivalent of the German Social Democratic Party. In 1920 a majority of the delegates to its conferences at Tours voted to affiliate to the Third International and to become the Communist Party of France. The anti-Bolshevik minority led by Leon Blum split off calling themselves the “Section Française de l'internationale Ouvrière” (SFIO), by which name they were known until June 1971 when they joined with various left radical clubs led by François Mitterrand to become “the Socialist Party”. Mitterrand, a typical bourgeois politician under the Fourth Republic and later joint candidate of the Left against de Gaulle in the 1965 Presidential election, became the leader of this new party.

Support for Reforms
In the 1930’s the SFIO was the largest party in France calling itself socialist, the French Communist Party (PCF) having lost ground as it came more and more under Moscow’s control. During the second world war (but only after the German invasion of Russia in June 1941 of course) the PCF regained this lost ground, and has been the larger party ever since. In fact at every election since the war the PCF has consistently retained the support of about 20 per cent of the electorate.

The new PS still claims to be Marxist in inspiration and it is still possible to find references in its literature to the abolition of the wages system as an eventual, albeit very eventual, aim. In practice, however, its stands for state capitalism to be achieved gradually by a series of social reform measures. Its main theoretical difference with the PCF has been its insistence on the importance of political democracy both as a means of achieving its state capitalist aim and as an essential feature of that society. In other words, it has stood for what might loosely be called “democratic state capitalism" as opposed to the bureaucratic state capitalism on the Russian model favoured by the PCF.

When the Cold War came, while the PCF — naturally — adopted a pro-Moscow attitude, the SFIO was pro-Washington. It supported NATO and the Common Market, took part in the CIA-sponsored split in the CGT, the main trade union centre in France, and denounced the Communists as agents of Russian imperialism. As one of its leaders once put it, cruelly perhaps but accurately: “the CP is not so much on the Left as in the East”. The PCF replied in kind. The SFIO, they said, were right-wing traitors to the working class and agents of American imperialism. A clear case of the pot and the kettle calling each other black.

Own Image Recognized
Now all this is forgiven, at least on the surface. The two parties have got together and drawn up a joint programme. If they win a parliamentary majority, Mitterrand would become the Prime Minister with Communist Ministers in his Cabinet. This is not the first time the two parties have collaborated on the electoral, and the governmental, fields. In 1934 the two parties made an electoral alliance which marked the end of the Comintern’s "social fascist” policy and paved the way for the Popular Front government of 1936 under the SFIO leader Léon Blum. For a couple of years after 1945 there were Communist Ministers, first under de Gaulle and then in coalition with the SFIO and the Christian Democrats. Then in 1947 came the outbreak of the Cold War and the unceremonious dismissal of the Communist Ministers. More recently the two parties agreed to field Mitterrand as the joint candidate of the Left against de Gaulle in 1965. Then in June last year came this agreement on a common government programme. What has really made this possible, it should be noted, has been the thaw during the past decade in relations between American and Russian imperialism. This has allowed the two parties to forget their foreign-policy differences and come together with a joint programme of reforms both of them had long been independently advocating.

For the much-vaunted Common Programme is merely this: a list of promised reforms of capitalism. There is nothing in it that would not be endorsed by the Labour Party in this country, except perhaps that the Labour Party with more recent experience of governing capitalism would be more cautious about promising so much at one time. The list of reforms is familiar: retirement at 60, a 40-hour week, a new Labour Code, a minimum wage, free medical treatment, a tax on increasing land values, 700,000 houses a year, votes at 18, a National Investment Bank, price controls, abolition of capital punishment, re-introduction of proportional representation, no French nuclear weapons or tests, etc, etc, etc. The arms, aerospace, nuclear energy and drugs industries, along with underground resources, are to be nationalised with compensation. So are parts of the computer and chemical industries. And the State will take a share in financing and running certain other industries like steel, petrol, telecommunications and water supply. But, as the programme itself is at pains to point out, “an important private sector” will still survive.


Letting a Tuck In
Now, nationalisation is state capitalism not Socialism, but it is what the PCF falsely says is Socialism. So how do their leaders explain watering down their aims and not fighting on a “socialist” programme? Georges Marchais, its general secretary, has, as our quotes show, [See the bottom of the article.] been quite frank with his followers. The Common Programme, he has told them, is not and is not meant to be a socialist one, even in the false Communist Party meaning of the word.

So, if the implementation of the Common Programme would not establish “socialism” what is it supposed to establish? According to the programme — and this part reflects PCF ideology — it would establish “a genuine political and economic democracy”. So yet another “transitional stage” is being introduced between capitalism and Socialism! Marx and Engels did indeed hold that between the capture of political power by the Socialist working class and the establishment of Socialism there would need to be a political transition period during which the capitalist class was dispossessed. By Socialism and Communism (the two words meant the same to them) they meant a wageless, moneyless, Stateless society. Lenin later inserted a further stage before such a society (for which he used the word Communist only). For him this new stage, “socialism”, would be characterised by the State ownership of the means of production, equal wages, etc. Then he inserted yet another stage, “state capitalism”, where the so-called proletarian state would control private capitalist industry. Now we have yet another stage — “a genuine political and economic democracy”, a reformed capitalism run by a PCF-PS coalition.

Same Old Problems
What does all this nonsense of a moneyless, wageless, Stateless society being reached via “a genuine political and economic democracy”, “state capitalism” and "socialism” mean? Is it not the old gradualist and reformist argument that capitalism can gradually be transformed into Socialism through a series of social reforms passed by a government claiming to represent the working class? Of course it is. The PCF, and its counterparts elsewhere, in fact have long been just as reformist as the Social Democratic and Labour Parties of the world. They too suffer from the illusion that it is possible for a political party to use government power to make capitalism function in the interest of the working class. The sad thing is that in France this illusion is obviously shared by many ordinary workers who are enthusiastically backing the Common Programme and are expecting great things from its implementation.

Will the PCF-PS alliance win a parliamentary majority? This is certainly a possibility, though the electoral system which over-represents the conservative countryside works against them. But if they do win, what then? Assuming that there is no constitutional conflict with President Pompidou, a Gaullist, we would predict that the new reformist government would get off to an enthusiastic start. Some of its more popular social reforms would be implemented. But then, in time, the new government will settle down to the job of governing French capitalism and the enthusiasm will wane as the workers notice no basic difference in their daily lives. The government will come into conflict with groups of workers demanding wage increases. Ministers will begin to appeal to workers not to strike and cause difficulties for “their” government. Lagging exports or balance of payments difficulties or an international monetary crisis or a too-slow rate of growth — the everyday problems of any government of capitalism — will force Ministers to make excuses for not implementing their reform programme as quickly as they would have liked. Workers will be urged to work harder and increase productivity. The familiar pattern workers in Britain experienced under the last Labour government. For many French workers, however, this will be something new since they haven’t been under a full “Labour government” since just after the war.

Needless to say the various Trotskyist groups in France (besides fielding their own candidates in the First Ballot) are saying: “Vote for the Common Programme” just as they say “Vote Labour" here. Our advice would be different. The best thing workers in France can do in these elections is to go to the polling booths and write the words "Socialisme Mondiale” across their ballot papers.
Adam Buick

“Does this mean installing communism or even socialism? Evidently not. A socialist society has for its basis the collective ownership of the principal means of production and exchange, and the exercise of power by the working class in alliance with other segments of the toiling population. It suffices to look at the common programme to appreciate that its achievement would not lead to the installation of such a regime in France”. Georges Marchais, speech to the national congress of the French Communist Party on 13 December, reported in The Times, 14 December 1972.

“Obviously by applying this programme we shall not establish communism, or even socialism, in France. But we can introduce democratic and anti-monopolistic reforms of unprecedented scope. And we think that this new democracy will be a step forward, a form of transition towards socialism, which is suited to the conditions of France today”. Georges Marchais, General Secretary of the French Communist Party, in an interview with The Times, 17 November 1972.

That's the March 1973 issue of the Socialist Standard done and dusted.