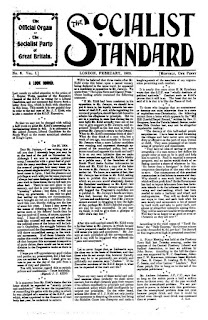 It is frequently asserted by patrons of monopoly that the educating of the masses has been a dismal failure. The snob-employer says it resentfully when dismissing some audacious demand for wage increase, the patrician superciliously when some hireling makes him aware of the rights of men. The cleric contemplating his empty conventicle likewise laments the disastrous results of education. Each and all ascribe the lamentable condition of revolt to the dangerousness of a little learning. Viewed with capitalist eyes, if Education evokes class-consciousness it is indeed anathema, but to the Socialist the murmur of the master is a message of hope.

Is, or is not, compulsory education a waste of public funds?

Under existing conditions a vast amount of expenditure receives no ultimate return whatever. Statistics of five years back proved that 75% of the lowest class who had passed through all the standards of school had great difficulty to write legibly and read unstumblingly when the age of thirty was attained. Only this last week in discussion with an enthusiast on education who has much practical experience in slum schools and is quite anti-socialistic, the following valuable admission was made: "Nothing can be done to obtain happier results unless the surroundings of the pupils are materially altered."

This current year in one of the poorer schools an inspector contrasted the work done by children of eleven with the studies easily understood by his young daughter of nine. The elder— offspring of the picker-up of a precarious, hand-to-mouth existence—lagged far behind the junior whose childhood was unharassed by trade fluctuations. If it be true that "Where Care lodges, Sleep will not lie" verily it is daily proven that study and worry have no dealings one with another. How is it conceivable that the horrors of the home can be superseded by the joys of knowledge ? For instance, our little ones come to morning session mainly breakfast-less, certainly lacking a nourishing meal after a night of unrefreshing repose: children and adults alike occupy one bed in the vitiated atmosphere of the one room constituting their "home" situated in some airless slum—Short's Gardens, Lamb's Conduit Passage, Betterton Street, alleys in the New Cut and Canning Town. One child in the Third Standard three weeks ago awoke to find her mother dead by her side. Such shocks as these are not conducive to alertness of apprehension or retention of facts.

Again, compare the average age of scholars in higher grade and very poor schools. It is two years behind in the latter case; and then, too, the middle-class school displays no such divisions as are found in the less favoured one. Here the pupils are classified thus—An intelligent majority, who, by dint of incessant drudgery will be capable of passing up one standard every twelve months, then the obviously dull, who will be tutored in same class two or more years,— sometimes when the age-limit of fourteen is reached the child is still in the Second Standard, —thirdly, those most pathetic specimens, pupils passed on from our defective centres. Very few people have any idea of the vast expense of these little citizens to the nation !

Although the Code of Instruction is supposed to be compiled for all schools under Government there is a significant clause in it to the effect that all regulations shall be enforced "as far as circumstances will permit." After arduous attempts to adopt the full curriculum the exemption has over and over again had to be claimed, owing to the total inability of the learners to grasp more than the merest rudiments. Inspectors will discourage the ambitions of a freshly installed head-teacher who places before them for their approval a most comprehensive syllabus. One who has just retired after many years service said that it was a sheer impossibility and absurdity to seek to compel such stunted capacities to comprehend anything which required concentration of thought.

Various illustrations can be cited of teachers who have believed not these reports, but, with a faith in their own powers beautiful to behold, have made a brave fight to establish more advanced subjects,—several of such disillusioned ones are personally known to the penner,—who after strenuous struggles have abandoned the position : beating the air is a singularly disheartening process. Even in lessons such as Drill when acumen is not demanded the body-conquering is noticeable. In every class there are children too weak to take muscular exercise, and many of the others are utterly wearied by half-an-hour's training.

In conclusion, we admit the failure but do not attribute it to the causes so frequently assigned, but to the dwarfing due to semi-starvation. Reforming the methods employed, altering the requirements, or any reform whatever will be futile : the sound, healthy body and teachable mind cannot be the lot of the youth of the nation under Capitalsm.
Kate Hawkins
Posted by Imposs1904 at 8:48 AM

Clerkenwell branch. Clerkenwell branch secretary 1904-5. Miss Hawkins, probably left the party around 1909 when her husband TA Jackson did.
* Kate Hawkins came from a well off background; her cousin was novelist Anthony Hope Hawkins, author of The Prisoner of Zenda. She was probably the sister of Horace Hawkins (above). In 1904 she was working as a schoolteacher and living with TA Jackson, whom she later married. They had three daughters, one of whom died in infancy, another, Stella, born 1908, was a member of the SPGB in the 1930s. During the 1920s Kate became increasingly mentally unstable due to stress and in 1925 became an inmate in Claybury Mental Hospital where she died two years later."