The coronavirus, bats, and deforestation (2020) 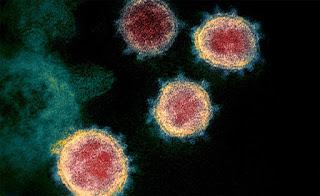 From the World Socialist Party of the United States website

Coronaviruses are not a new phenomenon, nor were they discovered only recently. They were first studied in detail by scientists in the 1960s. The name comes from the ‘corona’ or ‘crown’ of sugary proteins that protrude from the envelope of the virus. Coronaviruses exist in numerous varieties and infect birds and mammals, including bats, pigs, cats, and humans.

The coronavirus responsible for the current epidemic, now labeled COVID-19, is the third to cause a major epidemic in the last two decades.[1] The first, Severe Acute Respiratory Syndrome (SARS), emerged in southern China in 2002. Less well known is Middle East Respiratory Syndrome (MERS), first reported in Saudi Arabia in 2012. Each of these syndromes spread to two or three dozen other countries, both in the region of origin and further afield.

These three coronaviruses belong to the much wider category of zoonoses – diseases that jump from non-human animals to humans. There are numerous zoonoses, however, and most are caused not by coronaviruses but by other viruses or by bacteria or parasites. They were the source of the Black Death that killed between a third and a half of the population of Europe in the fourteenth century, the bubonic plague that began in 1894, the ‘Spanish’ or ‘Russian’ influenza that spread in the wake of World War One, and the so-called ‘swine flu’ of 2009.[2] Here are a few more zoonoses and species that transmit them:


So many species may transmit diseases to humans, including mammals, birds, and insects. Scientists seem to agree, however, that the ‘natural reservoir’ of all three of the coronaviruses that have caused the major recent epidemics (SARS, MERS, COVID-19) is bats.

Of the many species of bats, those belonging to the family known as ‘horseshoe bats’ carry coronaviruses genetically closest to COVID-19.[3] The species of horseshoe bat extant in China is the Chinese rufous horseshoe bat, which is widely distributed and not protected by law.

The coronavirus may be transmitted from bats to humans directly or through an intermediate species. The intermediate species for SARS was the civet cat, for MERS the camel. Shen Yongyi and Xiao Lihua of South China Agricultural University in Guangzhou suggest that the intermediate species for COVID-19 is the pangolin – a long-snouted scaly anteater whose parts are used in traditional Chinese medicine to treat skin ailments, menstrual disorders, and arthritis.[4] They found that genetic sequences of viruses isolated from pangolins are 99% similar to COVID-19.

I myself doubt whether the pangolin was the intermediate species. Many of the people first infected with COVID-19 worked at an open-air market in Wuhan where seafood and animals captured in the wild or their parts were sold. Pangolins were not officially listed as being on sale there. That is not surprising: pangolins are a protected species and selling them is punishable with a prison term of ten years or longer. Illegal trafficking may nonetheless be widespread, but surely it is conducted clandestinely, not in full public view.[5] Direct transmission from bats seems more likely. Bat meat was openly sold at the market (apparently it tastes rather like mutton, but has a texture similar to chicken). It is also possible that some other intermediate species was involved.

Does this mean that consumption of wild animals is dangerous enough to justify its suppression, as many argue (both in and outside China)? This conclusion seems at odds with age-old experience. After all, early humans fed themselves partly by hunting wild game for hundreds of thousands of years. Only in the last couple of centuries have most of us stopped using this source of food.

However, consumption of wild animals really is dangerous under certain conditions – namely, when the animals come from areas only recently penetrated and exploited by humans and therefore bring with them diseases to which we have not had a chance to develop immunity. This is explained by Greg Gerritt of the Rhode Island Green Party.[6]

There have been a number of relatively recent disease outbreaks with novel diseases, diseases that western science had not seen before, and often diseases that the communities where the outbreaks originate had not experienced before. Most of these diseases are also originally transmitted to people from tropical wild animal populations, with bats and primates implicated in some of them. What is happening is that the deforestation process works in a variety of ways, driven by factors like new road construction and the development of plantations. As roads reach new areas, they increase both the cutting of trees and the shooting of wildlife for food. Some of the wildlife is eaten locally and replaces food sources lost as deforestation progresses; some of the hunting takes advantage of the new roads and transports the food to urban markets where there is often a high demand for bushmeat. With the hunting taking place in places where very few people have hunted previously that are now available for exploitation due to new roads, or places where hunters are no longer living isolated communities, hunters are running into novel diseases in the same way that a survey of biodiversity in places that have not been explored and exploited before finds new species of geckos, salamanders, and monkeys. It you are finding new species of animals and plants, then you are running into new microorganisms: some will eventually be used to cure diseases, others will cause new diseases, and most will have little direct effect on humans.

The climate link is that the protection and maintenance of good health in the global forest, and especially tropical forests, is a critical part of our strategy to prevent the worst effects of climate change. We have to move towards zero carbon emissions rather quickly, but we also have to suck carbon dioxide out of the sky. Trees and soils are the most natural and least energy-intensive ways to do that. The best way to keep the trees and soils healthy is to protect tropical forests. We are already seeing reports of the carbon budget of the tropical forests turning negative. Deforestation is the big driver, but a decent amount of the loss of carbon in tropical forests is a cascade effect. As forest turn silent, as the animals are all hunted out even if it is prior to deforestation, the forest unravels. No animals are eating seeds that need to go through digestive systems to germinate. No animals are depositing seeds in their poop as they move from place to place. Very small pests run amok with predators gone. The ability of the forest to sequester and store carbon falls apart, requiring ever greater efforts to decarbonize and new ways to sequester carbon dioxide already in the atmosphere.

The conclusion is that the process that brings the new diseases to humans, deforestation, and the bushmeat trade are part and parcel of the climate crisis, and to better prevent future novel diseases, we need to do a lot better job of protecting the forests that help keep the climate intact.

That is all well and good. But this immediately raises further questions. Who is endangering the forests? For what purpose? How can the process be stopped? These questions are tackled in another article on this website, where I write:

Consider the fires now burning through the forests that serve as our planet’s lungs – in Amazonia but also in other parts of Brazil and in Indonesia. These are not ‘wildfires’: there is good reason to suppose that they are set deliberately in order to clear the land for commercial activities. In Amazonia arson opens up land for the cultivation of soybeans, for cattle ranching, in certain places for mining. In the tourist area around Pinheira in southern Brazil a state park has been set aflame with a view to residential development on what is viewed as prime real estate. In Indonesia most forest fires are set in order to clear land for palm oil plantations. So capitalists in at least five distinct non-energy fields of profit-making enterprise are involved in laying waste these precious forests.

If we are to stop the wanton destruction of our forests and the periodic epidemics associated with this process, we must stop production for profit and the endless expansion of capital.
Stephen Shenfield

[1] There are another four coronaviruses that cause the common cold.

[2] ‘Swine flu’ is a misleading term, inasmuch as the virus seems to be equally at home in pigs, birds, and humans. The outbreak was attributed to unsafe and crowded conditions at a pig ‘factory’ in Mexico. See my article here.

[3] According to Ian Jones, professor of virology at the University of Reading, UK. Source here.

[5] In African countries where the sale of bushmeat is illegal it is nonetheless available, but only through clandestine channels. Transactions occur in private homes, not on the open market.