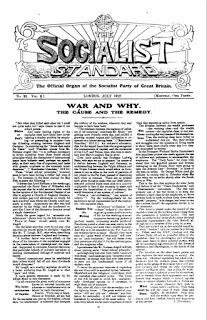 Councillor W. C. Anderson, presiding over the I.L.P. conference at Merthyr Tydfil, is reported to have said : ‘‘Social justice is not compatible with private ownership of land and industrial capital "

Seeing that capital is the exploiting form of wealth, and that the capitalist is capital personified, I should like to know from Mr Anderson how that ‘‘social justice” he prates of is going to come about by the exploiting form of wealth merely changing ownership and not being abolished. There is “industrial capital” under State ownership (the only form of ownership in which it can exist other than private ownership) in the State railways of various countries Mr. Anderson may have heard of, even if he has never visited. Let him give us an instance where the workers have obtained “social justice," and I will show that his conception of “social justice” includes exploitation.

Mr. J. Burgess (Bradford) said at the same conference that there was “nothing in the Parliamentary Report of the Party to show that the I.L.P. was a Socialist organisation.”

I wonder what Mr. Burgess wanted? Did be want the Parliamentary Report to lie by stating something that was not and is not true? For shame, Mr. Burgess!

Mr. George Lansbury passed through a fit of paralysing candour at the I.L.P. conference. He said: -

“When the vote on the Akbar incident was taken the Labour whips were running about scooping their members up for fear anything should happen to the Government. I, for one, have always felt ashamed of the vote I gave on that occasion.”

Mr. Lansbury, like the old bird he is in the game of spoof, is wide enough to appreciate the value of the sack-cloth and ashes dodge among such a conglomeration of sentimentalists as the I.L.P. But the old what-d’yer-call-him has the brazen effrontery to call himself a Socialist, which essentially implies internationalism. Then how’s this, from the report of the Parliamentary proceedings of May 21st ?

Mr. A. Shirley Benn (U , Plymouth) “thought the time had come when the great shipping industry should have one Government department devoting all its attention to maritime affairs. He would like to see every ship flying the British flag manned with British officers.”
Mr. Lansbury: “ And men.”

The mission of the B.S.P., as outlined in their organ, “Justice,” June 1st, 1912, and defined at their recent conference, is “to give political voice and vision to the blind and inarticulate discontent of the workers ; to bring their political organisation at least abreast of their industrial, so that they will not continue to vote into power the very men whose class greed they are continually forced to strike against."

The italics are mine.

It was only provisionally, then, that they advised the workers to vote for the Liberals at the St. Rollox and East Northants bye-elections.

“Though the British Socialist Party was a definitely revolutionary organisation, he took it there was not a single delegate there but would hold up both hands and use his best energies to secure forthwith the Free Maintenance of Children, the Co-operative Organisation of Unemployed Labour, the Minimum Wage in all industries, and the Eight Hours Law, for which Socialists have agitated continually for a full generation. Such measures properly used were stepping stones to peaceful revolution.”

Here I might say that to properly use the measures presupposes possession of political power by the working class, which dispenses with their necessity. But the above extract was uttered on the Saturday morning; hear him now on the Monday evening, as reported by the “Manchester Guardian ” (28.5.12.):

“The capitalist parties seemed to have pretty nearly exhausted the possibilities of blundering. There was not a measure before the country, from either of the political parties to-day, which, if carried into effect to morrow, would benefit the men, women and children of this country to any appreciable degree.”

There you are, Hyndman on Saturday and Hyndman on Monday. Which is the Hyndman and which the behindman, eh ? Why, me little man, yer pays yer money and yer takes yer choice. It’s the same H. M. H., only he has such a bad memory.

It has been stated previously by Socialists and is here repeated, that Capitalism knows no national boundaries, that labour is the source of all value, and that to economise in labour-power with as great or greater output is the very acme of efficiency.

That has been stated by opponents of the existing system of production for profit. Hear now a witness for the defence, an upholder of the present capitalist system. Sir Alfred Mond is the witness, and on the matter of establishing better relations betwixt Germany and England he delivered himself thus in "Nord und Sued”:


“In all countries the great world of commerce knows no national bounds and tolerates no interference with its labour by such limitations. The cohesion of the various parts of the business world is more one by industries than by nationalities. The relations between the captains of industry of all countries are getting more friendly every day, and exhibit a growing mutual respect and inclination to co operate on a labour-saving basis.” (Italics mine.)

That phrase “captains of industry” seems familiar—or at least its definition does. It is alluded to by Karl Marx in the XIII. chapter of “Capital” thus:

“It is not because he is a leader in industry that a man is a capitalist. The leadership of industry is an attribute of capital, just as in feudal times the functions of general and judge were attributes of landed property.”

Stand down, Mond, the Socialist case has been well upheld by you.

Mr. Andrew Carnegie in his rectorial address to the Aberdeen University students said: “Youths should have a decisive voice, if possible, in the selection of their future occupation.”

There is another thing he might have advised them to do, viz, choose their own parents. If they did what large families the Carnegies, Rockefellers, Goulds, and Morgans would have! Why, no poor man could have any children at all, unless some foolish young man chose a labourer on 16s. a week to be his father.

The question of leaders and their actions commented upon and replied to in the last issue of the “S.S.” recalls to mind the case of Mr. Havelock Wilson (Seamen’s Union). This leader stood as candidate at South Shields bye-election in 1910. He then spoke against the action of the Board of Trade in raising the load-line of British ships and thus imperiling to a greater degree than formerly seamen’s lives and permitting an increased tonnage to be carried in the same ships. That was as candidate for Parliament. But the evidence given on June 11th, 1912, before the Commissioner of Wrecks (Lord Mersey) by Mr. A. M. Carlisle was to the effect that Mr. Wilson had signed the report of the Board of Trade Advisory Committee of 1911. This report’s recommendations would have involved the “Titanic” carrying even fewer lifeboats than she did. And of such is the kingdom of labour leaders.

Methought the enquiry being held in London under Lord Mersey was to investigate the circumstauces of the lose of the “Titanic” and to fix the responsibility for the disaster. It appears not to be so, however, judging from the following passage, taken from the evidence given on June 6th:

Mr. Sanderson (White Star manager): "I understand that the purpose of this commission is to find out how we are to reduce those risks (i.e., incidental to sea travel) to an absolute minimum.” Lord Mersey : “That is quite true.”

All our judicial and semi judicial enquiries are above suspicion of being impartial. The “Titanic” enquiry shows this to great advantage in the following comment of Lord Mersey :

Lord Mersey (to Mr. Harbinson, counsel for third class passengers, who had asked whether the captain in handing in a Marconigram to Mr. Ismay was inviting an expression of opinion as to what the vessel’s speed should be):—“When you come to address the Court—if ever you do—I don’t know whether we shall ever reach the time to make your speech—you may make such a comment to me, but at present yon must confine yourself to facts.”

Even the third class passengers’ counsel can make a speech commenting upon a steamship director—if there’s time!