Voice From The Back: Growing Old Disgracefully (2005) 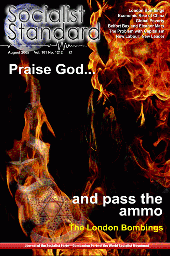 A feature often commented upon by historians, is that before private property societies existed the elderly of a kin, clan or tribal group were treated with great respect. Their knowledge of the terrain, animals and availability of food was invaluable to their society. How different today in modern capitalism. “The government is abandoning hundreds of thousands of elderly people to a care system that steals their dignity, denies them meaningful choice and risks endangering their health, according to a hard-hitting report out tomorrow. The report – by the country’s leading independent healthcare thinktank, the King’s Fund – concludes that funding and organisational problems are putting old people at a disadvantage compared with other recipients of care. It also says that untrained, unqualified and overstretched staff are putting them at risk.” The Observer (26 June) Let’s face it inside capitalism old-age sucks. Although all those social workers forced to make these decisions will themselves be old one day.

The growing practice of scientific journals to copyright and restrict access to scientific data without cash subscriptions has led Robert Smith, a former editor of the British Medical Journal, to raise a moral dilemma. “Making money out of restricting access to (medical) research is immoral.” The Times (2 July) In fact Mr Smith you are terribly wrong, inside capitalism it is not only moral but good business practice. Only inside a socialist society will we have unrestricted access to knowledge for every human being on earth. People dying because medical personnel couldn’t access the latest scientific knowledge would be unthinkable inside a socialist society. It is quite moral today.


The Grapes of Wrath

In any sane society an abundant harvest from the vineyards would be the cause of celebration and no doubt a little celebratory tipple. But we don’t live in a sane society, we live in capitalism where the whole purpose of production is to make a profit not satisfy a social need. “It may seem heinous to any enthusiastic bordeaux drinker, but the EU has pledged £100m under the common agricultural policy to turn 670m bottles of French and Spanish wine into industrial alcohol to help reduce a surplus caused by competition from the New World.” The Sunday Times (3 July) Inside a socialist society if we produce too much wine we’ll just have to drink it. Terrible prospect, aint it?

The callousness of capitalism and the cynicism of the capitalist press could hardly be summed up better than this report about the bomb carnage in London that left over 50 dead and scores wounded. “City Index, the financial spreadbetting firm, said that more than 8,000 retail investors had dived into the market on Thursday, correctly backing their hunch that share prices would quickly bounce back. Some will find profiting from horror distasteful. But many in the City applaud the resilience of capitalism.” The Sunday Times (10 July) The editors carried this story under the headline – “Investors made millions amid bombs chaos.” Could anything be more disgusting? We are talking about trauma, amputation, disfigurement and death here not an investment opportunity.

“A penniless asylum seeker in London was vilified across two pages of the Daily Mail last week. No surprise there, perhaps – except that the villain in question has been dead since 1883. “Marx the Monster” was the Mail’s furious reaction to the news that thousands of Radio 4 listeners had chosen Karl Marx as their favourite thinker.” The Observer (17 July) Many people who read the works of Karl Marx realise that the popular concept that he has anything to do with Lenin, Trotsky, Stalin or Mao is nonsense, in fact that he was opposed to dictatorship and authority all his life. Start reading what Marx actually wrote and accept his challenge to think for yourself and bugger the Daily Mail.