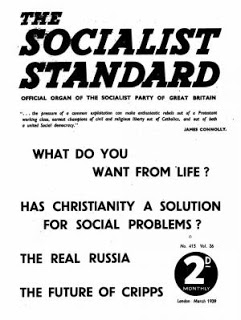 From the March 1939 issue of the Socialist Standard

“Thy Kingdom Stands, nor Falls for ever.”—(Well-known hymn.)

Thirty-five years ago, when the S.P.G.B. was founded, religion was an issue in debate. To-day the churches are trying to recapture their failing interest, and preserve what is left. A year or two ago the Archbishop of Canterbury, and others, loudly announced a Recall to Religion. The promoters of a united faith have been busy. At the world conference on “Faith and Order,” in August, 1937, the Scottish Roman Catholic Archbishops departed from a long-established practice, and sent observers with a watching brief. On the one hand, growing scientific knowledge has lowered the Church’s stock. The pundits thought they could find refuge in the  writings of the oracles of modern physics. But they found none among recent discoveries in other fields, and especially in psychology. These latter were much more intelligible to most people, equally exciting, and widely read. On the other hand, week-end amusement, ready to hand in the shape of cheap transport, radio and cinema, has eclipsed the churches in their appeal. Even the cheap-jackery of advertisement fails to fill many a parson’s empty pews. God is on diminishing returns.

One of the attempts to weld together the faithful appeared in the form of a report on “Doctrine” last January. Ostensibly, the Committee was set up in 1922, by the late Dr. Davidson, then Archbishop of Canterbury, and Dr. Lang, the Archbishop of York, to—

Consider the nature and grounds of Christian doctrine with a view to demonstrating the extent of existing agreement within the Church of England, and with a view to investigating how far it is possible to remove or diminish existing differences.” —(Page 55, Manchester Guardian Weekly, January 21st, 1937.)

but it is patently an attempt (adapting the words of the Manchester Guardian at the time) “to make the acceptance of the traditional doctrine of the Church easier for men of modern ways of thinking.”
The Committee was prepared to modify what were once thought to be central tenets of the Anglican faith in order to make adherence less exacting. (For instance, they no longer demanded belief in the Virgin-Birth. Some were prepared to grant the “symbolism” of the creeds and the miracles. They were, likewise, not prepared to insist upon the historicity of the Gospel accounts, but were willing to accept a wide variation of opinion on the character of the Sacraments.) They practically omitted to deal with more fundamental matters, on the ground that these lay outside the terms of reference. As a matter of fact, to face the issue squarely in the light of modern knowledge, would be filing a petition of Christian bankruptcy.
True, as the report sometimes states, even members of the Commission were not always unanimous—a circumstance which they bore with greater composure than the history of the Church would have led one to expect.
But even though unification may be achieved, religion is rapidly losing its claim on the people. C. E. M. Joad wrote two articles in the New Statesman and Nation (January 22nd, January 29th, 1938), in which he analysed the losses on various flanks. Between 1906 and 1936 the Anglican and Free Church schools lost over three and a half million scholars—about fifty per cent. The number of clergymen active in the Church of England has also halved during the same period. An analysis carried on in churches and chapels shows a drop during this time of over seventy-five per cent, in attendances. This drew one resentful letter from a cleric, who tried unsuccessfully to discount the facts. There is also a shortage of candidates for Dedication. A memorial submitted to the Archbishops (December 13th, 1937) proposed to combat this by a number of simple devices. One of these was to urge celibacy as a less expensive mode of life, which would enable the ministers to live on a more meagre salary: —

The memorial deals with the changes in the social aspects of country districts. Fewer sons of the wealthier classes are being ordained, it is stated; fewer ordinands have any private means. Filling country livings becomes increasingly difficult.
The remedy at present sought is the amalgamation of benefices, very unpopular in the parishes. This, says the memorial, is surely wrong. The remedy is for the priest to live not in the big glebe house but in a cottage, like his humble parishioners.”—(Daily Telegraph, December 13th. 1937.)

The growth of the poorly-paid element in the Church has been partly responsible for a new outlook, especially in the great cities. In the words of the New Statesman and Nation (January 22nd, 1938): "The Church of England, once the backbone of Conservatism, has become increasingly sympathetic to the more moderate aspirations of Labour ” (p. 107).
But now that working-class demands and actions are a factor in the life of the nation, the Church has had to trim its sails accordingly. The working class will find little support, however, from the classical upholders of privilege and wealth. The Bishop of Durham's letter to The Times (September 24th, 1935) is quoted because, typically, it hides under a cloak of apparent devotion to the miner’s interest a deep antagonism:—

As matters stand with us in England, I am fully persuaded that strikes and lock-outs are not only widely calamitous to those directly concerned, but unfair to the nation as a whole, and, in the true sense of the word, immoral. It has been my experience to live through two great strikes in this Diocese, and I am unable to see that any other result came from them than suffering, economic confusion, and lamentable social embitterment
Therefore, in the interest of the whole community, and therein specially of the miners, the clergy cannot, in my judgment, rightly or wisely associate themselves with movements which contemplate, and logically result in, open conflict.

But, to confine ourselves to exposing the religious sham would be a sterile undertaking. Belfort Bax wrote in 1902, in ”The Religion of Socialism ”: —

There is a party who think to overthrow the current theology by disputation and ridicule. They fail to see that the theology they detest is so closely entwined with the current mode of production that the two must stand or fall together . . .

And that, indeed, is the truth. Religion has slavishly adapted itself to the needs of the hour, and can in these latter days even court the working class. The Kingdom of God has been proven a myth. The Church is no longer militant. Religion serves no ethical, moral or social purpose other than that which corresponds to the need of a privileged class, who take little further stock in it. And the sooner the workers get rid of both, the better; and so much the quicker find a more prosperous state than they are likely to get from the declining ministry upon earth.
C. J. Kilner.
Posted by Imposs1904 at 6:58 AM