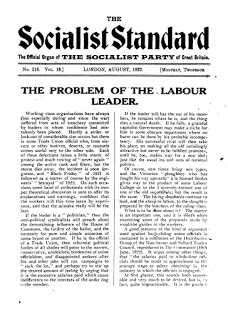 Editorial from the August 1922 issue of the Socialist Standard
On the front page of “The Communist ” (8-7-22) there appears an article entitled “Our Duty to Ireland ” that calls for some comment on our part on account of the nonsense contained in it.
The main struggle in Ireland is not, and never has been, a struggle of wage workers against masters. Here and there in the history of Ireland there have been minor struggles on the part of the workers, but the greater part of the stage has always been occupied by the national struggle for freedom of enterprise on the part of the various groups that might benefit by greater freedom to exploit Irish Industry. As Ireland exists principally by agriculture the small farmers or peasants have figured largely in the strife. The fact that the poverty-stricken peasants have borne the bulk of the burden of struggle is no evidence that they will obtain any benefit, whatever be the outcome.
This struggle in Ireland has been going on for centuries, and bitterly indeed have the peasantry suffered by the coercive actions of the foreign land-owning class, who were backed up by the different English Governments.
Irish industry is backward partly on account of the lack of certain economic resources such as coal and iron, partly because it suited Irish landlords and English capitalists to keep Ireland in the main an agricultural country.
Though the capitalistic development of Ireland has been slow, yet considerable progress has been made in that direction. The wage labouring class has relatively increased and the farmers have come more and more under the control of large industry. The farmers are, in the main, in the hands of the agents of the large exporters—egg buyers, cattle buyers, corn buyers, creameries and so on. The European war made the farmers temporarily well-to-do, and they poured money into the Sein Fein movement in the belief that the latter movement would conserve their prosperity. Peace, however, is bringing them back to the position of paid growers and distributors of agricultural produce.
An Irish Sein Fein Republic will not solve the difficulties of the wage labourers and farmers—it will, in fact, intensify their misery. They will then be under the control of the same people who control affairs now—Irish buyers—Irish Capitalists—without being able to salve their wounds by blaming all their troubles upon the English oppressor.
The way out of the difficulties facing the Irish town and country worker is the same as the way their fellow workers have to follow, no matter what country they chance to exist in. That way is to join with their fellow workers the world over in the struggle to put an end to Capitalism by introducing Socialism. Anything short of this will only bring in its train bitter disillusion. They who tell the Irish workers to organise for anything less than this are their enemies.
Such in brief is the general position. The article mentioned in our opening remarks advises the present minority in Ireland to fight on, and the reason they advance for backing the minority is contained in the following extract:

“De Valera never was, never can be, a leader of the workers. Nevertheless, most of the revolutionary workers are with O’Connor and him.
“They are with them for the same reason that we, if we had to make the choice, would be behind De Valera and O’Connor—because they are fighting the British Empire. (Italics theirs.)
“That reason—no other.”

The Communists, therefore, support the minority in Ireland “because they are fighting the British Empire—that reason— no other.” What a brilliant attitude for a self-styled working class party to take up. If they follow this policy out logically (not that we wish to be accused of suggesting that the Communist can follow anything out logically) then on the same ground they would have been bound to support the Central Powers in the European War, incidentally supporting the oppressors of foreign working men, and the useless slaughter of working men generally. In other words they tie themselves to a policy of supporting the murderous conduct of different groups of foreign capitalists “because they are fighting the British Empire!” A delightful position indeed—but a fitting position for sensational gasbags.
The above is not all—the article concludes as follows :

“Workers of Britain, show these politicians they are wrong.
“You have no cause for quarrel with your oppressed comrades in Ireland. You never had. Whether the present armed conditions in Ireland are prolonged or no.”
”Stop making munitions for Ireland ! Stop sending munitions to Ireland ! Demand the withdrawal of British troops ! Do for the Irish what you did for the Russians !” (Italics theirs.)

This is really the most absurd part of all—if one can define one piece of nonsense as more absurd than another. Not many months ago they themselves made the following enlightening observation on “what you did for the Russians.”

“Frankly, the National Council of Action has failed, and its failure is all the more disappointing when one remembers the unanimity and enthusiasm of the great Central Hall Conference held at the beginning of August last. It was formed to prevent the supplies and munitions being sent in support of the attack on Soviet Russia, which it is quite obviously not doing. Somehow, and from somewhere in this country, those supplies are being sent.
“A Moscow report alleges that England has sent seven steamers of munitions, three tanks, and twelve small steamers with provisions in aid of Poland, and that these have been unloaded at Danzig. German reports refer to foreign vessels passing through the Kiel Canal, presumably to the same direction.’ ” (The Communist, 7/10/20.)

This is “what you did for the Russians.” What blind rhetorical balderdash !
“What you did for the Russians” then was to fail completely to prevent munitions being sent to assist those fighting against Russia. The Communists wish the same policy to be carried out again. Funny, isn’t it?
Taking the superficial facts of the situation in Ireland as it is at present concerning the attitude of the minority, the position is. as follows :
The Irish people have voted in favour of the Free State idea by an overwhelming majority. This is the fact that cannot be swept aside by sensational remarks. Consequently, whatever the minority may think of the Free State position, the only sensible course for them to follow is to accept the position the vote of the people has forced upon them for the present, but work to alter the mental outlook of the majority so that future elections will see the Free State position supplanted by the one the present minority favour. To endeavour to alter the views of the mass of the population by battering their heads is a nonsensical attitude to take up. Besides, has not the common cry of Ireland for years been that the majority of the Irish people were being coerced to suit the ideas of a minority ?
Whether or not the English Government has bought over the Collins group does not hide the fact that the majority of the Irish population agree to the position Collins has taken up. This should sign “finis” to the matter for the present without further useless throwing away of lives.
It may appear very heroic to fight a losing battle to the end; martrydom is always a very questionable attitude, though it may be spectacular. In the present circumstances, where it involves the lives of numbers of Irish working people who do not yet understand their social position, it is criminal folly.
Finally, as mentioned above, whatever the immediate outcome of the struggle may be, one thing is certain; it will still leave the Irish workers wage labourers—and that is the essence of the matter for us.
Posted by Imposs1904 at 12:24 PM

That's all of the August 1922 issue of the Socialist Standard on the blog.

I retained the Sein Fein spelling from the original article. It's used on two separate occasions, so I'm presuming that it wasn't a typo by the original printer. Maybe there was a version of that spelling back in the day? Who am I to 'correct' it?

It's crazy to think that August 1922 was also the month in which Michael Collins was assassinated by anti-Treaty forces in Cork.