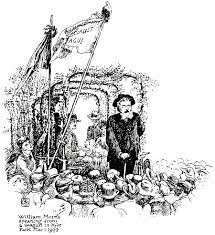 From the April 1934 issue of the Socialist Standard

“A life in which every human being should find unrestricted scope for his best powers and faculties.”

“Intelligence enough to conceive, courage enough to will, power enough to compel. If our ideas of a new society are anything more than a dream, these three qualities must animate the due effective majority of the working people: and then I say the thing will be done.”

Stella Stewart is better known nowadays as Stella Jackson, and Manchester's Working Class Movement Library will be holding a meeting on Stella Jackson/Stewart on Wednesday 28th April at 2pm. Details cut and pasted below:

"Our online Invisible Histories talks will start up again on Wednesday 28 April at 2pm when Katrina Goldstone will speak to us on the life and writing of Stella Jackson, daughter of T.A.Jackson. In particular she will focus on her observations on the Irish radical cultural groups Stella associated with in the 1930s and 1940s, as outlined in her unpublished manuscript Flotsam and Jetsam: Memoir of a Revolutionary's Daughter"

Katrina Goldstone's talk will focus on the life and writing of Stella Jackson, daughter of T.A.Jackson, and in particular focus on Stella's observations on the Irish radical cultural groups she associated with in the 1930s and 1940s in her unpublished manuscript Flotsam and Jetsam: Memoir of a Revolutionary's Daughter. Stella published one novel in her lifetime, The Green Cravat, a 'novelised history' of Lord Edward Fitzgerald and the 1798 Rebellion, and a political pamphlet on the Partition of Ireland, She also wrote reviews for the Daily Worker, Irish Democrat, and in later life for The Spectator.

Stella Jackson was a woman well used to be being cast into the shadows, or to being defined in relation to men ‑ her father, the communist historian T.A. Jackson, her lover, Ewart Milne, and less frequently Cork writer Patrick Galvin, briefly her husband. Jackson’s memoir offers an intimate snapshot of the small but vibrant radical literary scene in Ireland, and in the London of the interwar period and war years. Her story is just one in Katrina's new book, Irish Writers and the Thirties: Art Exile and War.

As an independent researcher, Katrina Goldstone has written extensively on minorities, cultural diversity and Jewish communities. She has contributed newspaper features and reviews to numerous publications in Ireland and the UK. She has also been a regular contributor to programmes on RTE commenting on Jewish history, Jewish writers, the Holocaust, Anne Frank, and also on cultural diversity. In the coming semester she will lecture at Trinity College Dublin on Jewish women writers in the 20th century, non-fiction and fiction. Her book Irish Writers and the Thirties: Art, Exile & War, a study on Irish writers' involvement in internationalism and their role in Thirties left wing cultures, has just been published by Routledge in their Studies in Cultural History series.

This talk will be live-streamed, with login details appearing on this Web page on the day of the talk. It will also be recorded for later viewing on the Library's YouTube channel."

PS - It's refreshing to read an article in the Socialist Standard which does not uncritically gush over William Morris. More please.

Details on Kate Hawkins from Kaz's unpublished document on the founder members of the SPGB:

Hawkins, Katherine Sarah
Clerkenwell branch. Clerkenwell branch secretary 1904-5. Miss Hawkins, probably left the party around 1909 when her husband TA Jackson did.
* Kate Hawkins came from a well off background; her cousin was novelist Anthony Hope Hawkins, author of The Prisoner of Zenda. She was probably the sister of Horace Hawkins (above). In 1904 she was working as a schoolteacher and living with TA Jackson, whom she later married. They had three daughters, one of whom died in infancy, another, Stella, born 1908, was a member of the SPGB in the 1930s. During the 1920s Kate became increasingly mentally unstable due to stress and in 1925 became an inmate in Claybury Mental Hospital where she died two years later.