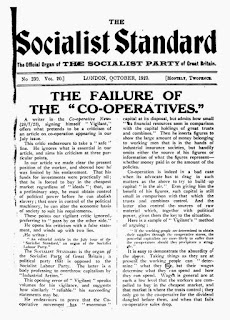 From the October 1923 issue of the Socialist Standard
A writer in the Co-operative News (28/7/23), signing himself “Vigilant,” offers what pretends to be a criticism of an article on co-operation appearing in our July issue.
This critic endeavours to take a “safe” line. He ignores what is essential in our article, and aims his criticism at three particular points.
In our article we made clear the present position of the worker, and showed how he was limited by his enslavement. That his funds for investments were practically nil; that he is forced to buy in the cheapest market regardless of “ideals” ; that, as a preliminary step, he must obtain control of political power before he can abolish slavery ; that once in control of the political machinery, he can alter the economic basis of society to suit his requirements.
These points our vigilant critic ignored, preferring to “pass by on the other side.”
He opens his criticism with a false statement, and winds up with two lies.
He writes :

“An editorial article in the July issue of the ‘Socialist Standard,’ an organ of the Socialist Labour Party.”

The Socialist Standard is the organ of the Socialist Party of Great Britain; a political party that is opposed to the Socialist Labour Party. The latter is a body professing to overthrow capitalism by “Industrial Action.”
This opening’ error of “Vigilant” speaks volumes for his vigilance, and suggests how similarly “reliable” his succeeding statements may be.
He endeavours to prove that the Co-operative movement has “enormous” capital at its disposal, but admits how small “its financial resources seem in comparison with the capital holdings of great trusts and combines.” Then he inserts figures to show the large amount of money belonging to working men that is in the hands of industrial insurance societies, but handily omits either the source of his figures or information of what the figures represent—whether money paid in or the amount of the policies.
Co-operation is indeed in a bad case when its advocate has to drag in such matters as the above to try to build up capital “in the air.” Even giving him the benefit of his figures, such capital is still small in comparison with that which the trusts and combines control. And the latter also control the sources of raw material which, together with political power, gives them the key to the situation.
Here is a sample of “Vigilant’s” method of arguing :

“If the working people are determined to obtain their supplies through the co-operative stores, the powerful capitalists are more likely to suffer than the co-operators should they precipitate a struggle.”

It is easy to demonstrate the absurdity of the above. Taking things as they are at present the working people can “determine” what they like, but their wages determine what they can spend and how they can spend. Wages in general are at such a low level that the workers are compelled to buy in the cheapest market, and that market is where the trusts control; they only go to the co-operative for the dividend dangled before them, and when that fails co-operative sales drop.

“Practically every society in the country is crying out for more and yet more trade, yet many members have stopped purchasing at their own stores because there is no dividend or there has been a reduction in the amount of dividend, arid they take their trade—the life blood of the movement—to establishments where no dividend is ever paid.”—(“Co-operative News,” 18/8/23.)

Farther on “Vigilant” completely smashes the co-operative position. He points to the fact that the Co-operative movement is now taking political action. If they could extend their business so as to beat the capitalist in the economic struggle, why bother about political action? Have they at last obtained a glimmering of the fact that political power gives its controllers the means to smash any opposition?
As a prop to his contention that the capitalists cannot smash the Co-operative movement if they wish, “Vigilant” makes the following remarks :

“Twenty-five years ago private capitalists banded themselves together to launch their offensives on the co-operative movement. Co-operators were dismissed from private employment, and the flow of goods from private producers to distributive societies was checked. Backed by public opinion, co-operators then beat the boycott, and have since adopted an even more menacing attitude towards the meat, soap, tea and tobacco trusts, their efforts becoming more effective as their control of the productive processes has tightened.”

So menacing has been the attitude of the Co-operatives and so effective their control that at the present moment the above-mentioned trusts control the market in their respective spheres and the Co-operative is nowhere ! Moreover, “Vigilant’s” little fairy tale is shattered by evidence from his own side :

“In reality, the big financiers and captains of industry did not discover that the co-operative movement was really what it was until the war was well on and they found it nipping in the bud here and there their well-devised schemes for plundering the people through the necessities of the war. In all former wars it had been recognised that, contracting for the Government was a sure means of securing a quick rise to fortune by the supply of shoddy materials at treble prices, and one can imagine the chagrin of those firms who found the two Co-operative Wholesale Societies insisting on charging the Government reasonable prices and supplying goods which were value for the prices charged. This was the beginning of the awakening of capitalism to the co-operative menace, but when once they became thoroughly awake it did not take them long to devise means for clipping the movement’s wings.” —(Editor article in “The Scottish Co-operator,” 23/6/23.)

“Theoretically, there can be no exploitation in a co-operative system of society.”

In the first place we are dealing with the Co-operative movement and not a co-operative system of society. We pointed to the frequent strikes of co-operative employees, and particularly the recent one in the C.W.S. Our wily critic, however, carefully ignored these facts, although the columns of the Co-operative News (even the one in which his criticism appears) are full of these subjects.
The President of the N.U.D.A.W. wrote to the Co-operative News (18/8/23) pointing out that the wages in the C.W.S. are lower than those of a private firm doing a similar trade to that at Pelaw and quoted’ the following figures :

“The flat rate for all women at the C.W.S. is 27/3. In the private firm they are graded into four classes and even the least skilled receive 4/3. per week over the C.W.S. rate.”

The above figures were printed and have neither been questioned nor denied by the Co-operative News.
The same issue of the Co-operative News states that notices of wage reductions have been posted in the various jam works of the C.W.S.
From the above it will be seen that the Co-operative concerns carry on business in. the same way as any ordinary capitalist concern, so far as their workers are concerned.
We now have an illustration of “Vigilant’s” knowledge of economics :

“An elementary knowledge of economics disposes of ‘Gilmac’s’ final point. To increase co-operative production is to reduce prices, and at the same time increase the purchasing power of the common people by distributing higher ‘surpluses.’ Consequently, demand is stimulated, production booms, and more and more workers are absorbed into the co-operative industry.”

An “elementary knowledge of economics” will very easily dispose of these early nineteenth-century free-traders’ slogans.
The Co-operative obtains its “surpluses” by conducting business on strictly capitalist lines—cutting down expenses by reducing wages and sacking workers. Carrying on their work more economically, i.e., by saving labour wherever possible, Unemployment will therefore increase. If a worker has less wages, and even, in some cases, no wages at all, lower prices (if the latter did come about !) would not increase their buying power beyond its present state.
It may, perhaps, be news to many admirers of the Co-operative movement to learn that a considerable amount of the Co-operative funds are invested outside the Co-operative movement. For instance, in 1915 they had “between four and five millions in bank balances and non-co-operative undertakings, of which the railways claim a fair share” (Labour Year Book, 1916, page 391), and “the investment for the movement in the War Loan of July last reached £1,500,000” (same source, page 389).
Here is further evidence that the Co-operative funds are used to exploit workers.
They also were not above “turning an honest penny” out of the slaughter of working men in the European shambles.
It is unnecessary to labour these points further, as they have already been covered in the last two issues of our paper, and “Vigilant” has not met the arguments therein set out.
Before concluding, we cannot pass un-mentioned the last paragraph in “Vigilant’s” alleged criticism. It reads as follows :

“We note that ‘Gilmac’ refers proudly and often to history in the course of his dissertation. When next he treats of co-operation we hope he will offer more than one historical fact, and that he will take it from a more authentic source than a current issue of the ‘Daily News.'”

In the first place the source of an historical fact is immaterial, provided such a fact is a fact. The “fact” in question was the strike of 15,000 employees of the C.W.S. against a reduction in wages. Significantly enough “Vigilant” sneers at the source, but makes no comment on the fact.
In the second place there are lengthy quotations from G. J. Holyoake; an examination of the workers’ present position under capitalism (which “Vigilant” again completely ignores) ; a statement of the ideas of Robert Owen, which can be verified by anyone from Owen’s short Autobiography; and much more, all of which are historical facts, and not taken from a current issue of the “Daily News.”
To conclude, after all the fairy tales and superficial statements of “Vigilant,” the present position of the Co-operative movement is as follows :

“The net result of the change is that, relatively to its rivals and enemies, co-operation is weaker than it was nine years ago ; weaker financially and weaker administratively.”—(“The Scottish Co-operator,” 23/8/23.)

Quite an impressive issue. Ramsay MacDonald taking offence at being called out for his Labour Fakerism - He would become Prime Minister four months after that article appeared. - and a correspondence with Pethick Lawrence, who would serve in later Labour Governments.