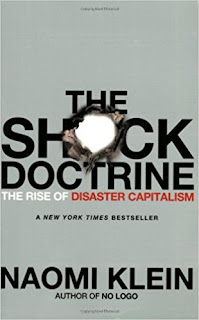 Book Review from the July 2008 issue of the Socialist Standard

The Shock Doctrine. The Rise of Disaster Capitalism. By Naomi Klein

The author of No Logo has written another book strongly criticising features of capitalism while still arguing for reform of the system rather than for its replacement. In her earlier book Naomi Klein concentrated on the spread of globalisation. In The Shock Doctrine she aims to show that disaster capitalism treats natural and man-made disasters as exciting market opportunities.

She illustrates the main theme and associated sub-themes of the book by events in various countries over the last few decades.

In the USA the attack on the Twin Towers and the Pentagon that came to be known as 9/11 resulted in some 3,000 deaths. It also led to Bush’s War on Terror, featuring big strides in privatisation, notably of the security industry. 9/11 exposed the security failures resulting from outsourcing government functions to profit-driven corporations: “the Bush team devised a new role for government, one in which the role of the state was not to provide security but to produce it at market prices.”

After the New Orleans flood disaster in 2005 the public school system was almost completely replaced by privately-run charter schools. The teachers’ union was shredded, the teachers were fired, and only some were rehired at reduced salaries. “Katrina was not unforeseeable. It was the result of a political structure that subcontracts its responsibility to private contractors.”

In Chile in 1973 General Pinochet seized power by a coup d’état against the previously elected regime which was called “socialist” but was really welfare-state capitalism. Before the coup Chile’s US-trained economists had tried to introduce a policy of privatisation, deregulation and cuts to social spending peacefully. When that policy was democratically rejected the ruling class resorted to the use of force. Pinochet’s battle was one-sided: more than 3,200 disappeared or were executed, 80,000 were imprisoned and 200,000 fled the country. Government spending was cut by 25 percent, accompanied by a package of pro-business policies.

The Falklands war in 1982 was fought between Britain and Argentina over possession of some tiny islands off the Atlantic coast. It cost several hundred military lives. It also served to boost the reputation of Mrs Thatcher as the Iron Lady. She went into Churchillian battle mode: after defeating “the enemy without” (the Argentine forces) she turned her attention to what she called “the enemy within” – the trade union movement and particularly the National Union of Mineworkers. Between 1984 and 1988 the Thatcher government privatised, among others, British Telecom, Gas, Airways, Airport Authority and Steel.

Klein takes 57 pages and quotes over 200 sources to analyse the complex, chaotic and profit-driven situation in Iraq. Here are some highlights:


“Develop the private sector, starting with the elimination of subsidies… investors could take 100 percent of the profits they made in Iraq out of the country, they would not be required to reinvest, and they would not be taxed… [the Iraq experiment] transformed the invasion, occupation and reconstruction into an exciting, fully privatized new market… BearingPoint, an offshoot of the major international accounting and consulting firm KPMG, was paid $240 million to build a ‘market-driven system’ in Iraq.” (pp342-8)

In 2005 a hugely destructive tsunami caused much loss of life, suffering and hardship for many people, especially in Sri Lanka. When the emergency subsided and fishing families returned to where their homes once stood, they were greeted by police who forbade them to rebuild. Hotels were encouraged to expand onto the valuable oceanfront where fishing people had lived and worked. An $80 million redevelopment project was to be financed by aid money raised in the names of the victims of the tsunami. Loans from the World Bank and IMF were offered in exchange for agreements to open the economy to privatisation and public-private partnerships.
Stan Parker
Posted by Imposs1904 at 1:14 PM