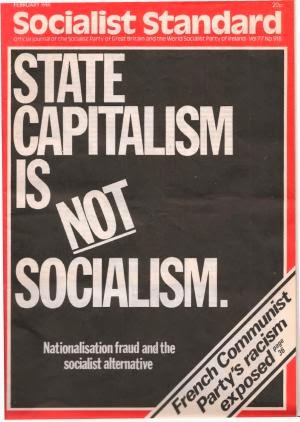 From the February 1981 issue of the Socialist Standard

"STOP IMMIGRATION, official and illegal" is one of the campaign slogans for the French presidential elections next April of . . .  Georges Marchais, General Secretary and candidate of the French Communist Party (PCF). Those who imagine that a party calling itself "communist" must have some internationalist sentiments, however vague, will be surprised at this, but not those who know anything of the history and present policy of the PCF. The PCF is also in favour of the French H-bomb and has plastered walls throughout France with a poster saying "Produisons français" )"Produce French") and its anti-Germanism has to be seen and heard to be believed. So it is not really surprising that they should also have adopted a narrow, nationalist policy with regard to immigration.

On this issue their policy is virtually identical to that of the French government: no more immigration, encouragement of immigrants already in France to go back where they came from, more or less equal treatment for those who despite this still choose to stay. When Lionel Stoléru, the French Minister of Labour, declared on a visit to Metz in October that "there is no question of admitting a single new foreigner into France"(Républicain Lorrain, 15 October 1980), he expressed a sentiment the PCF echoes, only they accuse him of not being tough enough, of allowing illegal immigration to continue!

Two PCF councillors from the Paris suburb of Ivry-sue-Seine, interviewed in Le Monde of 4 November, were asked "You want a reduction in the number of immigrants. So you and Mr. Stoléru are in the same battle". They replied "He talks, but there are no measures". As if to confirm that this was not just the opinion of two low-ranking officials in a sensitive area, the next day the Political Bureau of the PCF repeated his view in an official declaration on "The Housing of Immigrant Workers" which was published in full in L'Humanité, the Party's official daily paper, on 6 November:


These workers have been called to France by employers and a government greedy for profits. Today, the government states that immigration must be stopped otherwise new French and immigrant workers will be thrown out of work. This is in their mutual interest. But M. Giscard d'Estaing's government and his Minister Stoléru do not do what they say. They contribute to the organised illegal entry of workers with no social rights with the aim of depressing the rights of French workers. We insist that these practices be ended and that the traffickers who engage in them be repressed.

There are about 4 million immigrant workers, with their families, in France. Most of them are from Portugal, Spain and Italy but an appreciable number are from North Africa, especially Algeria, with a few from other former French colonies—Senegal, Mali—as well as refugees and others from Indo-China. There are also people from France's remaining colonies in the West Indies (Guadeloupe and Martinique) and the Indian Ocean (Réunion) who are not officially immigrants since they are French citizens but in the popular mind are nevertheless still regarded as such. Prejudice against immigrants in France is directed overwhelmingly against Arabs and black people.

The immigrants in the Paris area have tended to settle, or rather have been forced by economic necessity to crowd together, in the poorer traditional working-class districts on the outskirts of Paris. Many of these districts have PCF mayors and it was from these mayors that the pressure came to launch the current PCF anti-immigration, not to say anti-immigrant campaign. The Secretary of the PCF federation in the Val-D'Oise department, Pierre Blotin, declared at a press conference at the beginning of October that "the rate of immigrants in the communist towns of Val-D'Oise is unacceptable and dangerous" (Républicain Lorrain, 10 October 1980). He complained that employers purposely directed immigrant workers towards PCF run towns rather than to better-off areas run by the other parties. The PCF leaders in the Val-de-Marne department on the other side of Paris took up this claim, alleging that the government's Prefects were also involved. But the prize in this anti-immigration auction must go to Lucien Lanternier, PCF mayor of Gennevilliers, just outside central Paris. He went so far as to organise a demonstration to demand that immigrants be housed in a empty block of flats up for sale in the nearby, posh suburb if Neuilly!* Interviewed in L'Humanité on 4th November, under the heading "Why Shouldn't Neuilly also Receive Some Immigrants?", he explained:


I learnt that the town of Neuilly, whose social composition is known to everyone, was going to put up for sale a large complex of about 30 apartments. I immediately wrote to the mayor of Neuilly as well as to M. Stoléru and the Prefect, for the sale to be suspended and for the apartments in question to be reserved for the rehousing of immigrant workers with large families who only aspire to live in decent conditions. M. Peretti [the mayor of Neuilly] informed me that he would meet me on 29 October but two days later, by telegram, he refused any meeting. He thus closed, with the agreement of M. Stoléru, the door to our propositions. The policy of racial and social segregation practised by the government and the elected representatives of the Right can thus be judged from the facts. This attitude is part of the Giscardian apartheid which wants to concentrate the immigrant workers in working class municipalities while certain towns and fine quarters are reserved for financial magnates and the rich.

This is rather like the National Front in Britain demanding that Pakistanis be housed in Hampstead Garden Suburb in London rather than in Tower Hamlets! And of course it is pure demagogy on the part of the PCF mayor, though it could easily have back-fired since many "native" French workers from Gennevilliers might also have liked to be rehoused in Neuilly. The PCF mayor had in fact found a very clever way of indicating to those who had elected him that he understood their sentiments of "Arabs Out" and "Blacks Go Home" without actually having to utter such words himself. For on paper the PCF (like the government) is opposed to racism, but actions such as that of the mayor of Gennevilliers clearly show that the PCF is determined to exploit anti-immigrant feelings to pick up a few cheap votes in the coming presidential elections. Unlike in Britain most immigrants in France don't have the vote; only those from colonies like Guadeloupe and Martinique do. But in any case the PCs of these islands are not urging their supporters to vote for Georges Marchais, for a quite unrelated reason admittedly (they want independence from France).

Although the PCF avoids crude expressions of anti-immigrant prejudices it sails as close to the wind here as it can. The Politbureau statement published in L'Humanité openly states at one point that the interests of French workers must come before those of immigrant workers:


Communist elected representatives employ considerable efforts to harmonise the interests of all. Immigrant workers recognise what has been done in the municipalities run by communists. But in no way can this be done to the detriment of French workers (our emphasis).

This, no doubt, is why the statement went on to say "we approve the communist elected representaives who limit the global volume of social aid to immigrants". In other words, when it comes to distributing the meagre aid for the destitute for housing, schooling, and so on immigrant workers must expect to be treated by PCF-controlled councils as second-class citizens. "Britons First" as the National Front in Britain would say.

*Since this article was written the British press has reported yet further escalation in the PCF anti-immigrant campaign. Paul Mercieca, PCF mayor of Vitry-sur-Seine (Val de Marne department), in a bid to prevent some African immigrants being transferred to his town from a nearby non-PCF controlled area, went so far as to arrange for the vandalisation of the hostel set aside to receive them. (see The Times, 29 and 30 December 1980).
Posted by Imposs1904 at 8:53 AM