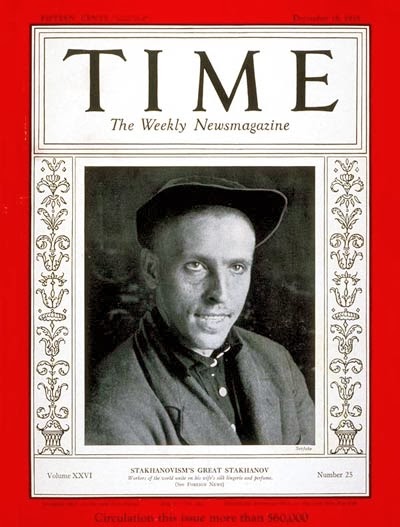 From the November 1985 issue of the Socialist Standard

Conservatives who fell for Thatcher's conveniently distorted version of "Victorian values" may be gratified to learn that the Russian government recently commemorated one of that country's great exponents of hard work and dedicated patriotism.

In August 1935 a mining team in the Donbas, led by Alexei Stakhanov, cut 102 tons of coal in one six-hour shift. (Or so it was reported; some accounts doubt that it happened at all, or was any more than a propaganda stunt dreamed up by the Stalinist rulers of the time.) This tonnage was about 14 times the norm of the shift (in Great Britain, output per man shift was then about 1.15 tons) and it resulted from Stakhanov devising a more efficient division of labour for his team, separating the processes of cutting coal from that of propping the shaft and assigning each to different workers.

This achievement was immediately welcomed by the Kremlin as an example to other Russian workers, who were being urged to give their all to the Stalin government's drive to overtake the production of western capitalism. Anyone who matched Stakhanov's feat was named, in his honour, as a Stakhanovite and the movement was quickly given official blessing. In November 1935, Stalin himself told the First All Union Conference of Stakhanovites that they were:

. . . a movement which is smashing the old technical standards, because they are inadequate, which in a number of case is surpassing the productivity of labour of the foremost capitalist countries, and is thus creating the practical possibility of further consolidating socialism in our country . . .

Within six months, some industries had as much as a quarter of their workforce in the movement. All over Russia, workers were hailed as heroes of the tractor factory, or heroines of the cowshed or the beet field. The apex of achievement was to be graded a member of the Brigade of Socialist Labour, or even better—such was the Kremlin's distortion of the dictionary of socialism—the Brigade of Communist Labour. There was, as we might expect, rather more to it than that, in this country which was supposed to be "consolidating socialism" the Stakhanovites were motivated by the established capitalist incentives of material advantages. They were rewarded with special bonuses which could yield a wage ten or 15 times the basic, with better housing, recreational facilities and the like.

The official version of the movement was that it was a spontaneous expression of devotion to the concept of socialism in one country and a selfless determination to see it triumph over the hostile capitalist world outside. It is nearer the truth to say that the Stakhanovites were deliberately encouraged by the Party as a pressure group for a general increase in productivity—or in other words a general intensifying of exploitation. (In other countries, another name for them might have been blacklegs). Far from being spontaneous, the Stakhanovites were carefully selected for stardom and then, in a self-fulfilling prophecy, set up with specially favourable working conditions to give them the best chance of turning out higher production statistics. Managers were naturally keen on the idea, which reflected well on them, and were not above a little  illicit adjustment of the books (just as production control managers in this country have been known to fiddle quota to ensure the highest possible production bonus) in order to have some of their workforce admitted to the ranks of the movement.

The Stakhanovites came into this because, by averaging their production against that of the rest of the workers, it was possible to impose an increase in production norms—to demand that more be produced in the same working time. During 1936, norms were raised in every industry—for coal they went up between 22 per cent and 27.5 per cent; for iron and steel between 13 per cent and 20 per cent; for textiles between 35 per cent and 50 per cent; for building between 54 per cent and 80 per cent; and so on. Like a mass panic, the preoccupation with production quotas took hold and spread, and norms proliferated until there were literally millions of them laying down how much Russian workers should turn out in a given time. It is easy to imagine the glorious complexities this must have created for the bureaucrats, the smug satisfaction of the Stakhanovites, but what fear and anxiety for the ordinary workers. It is less easy to imagine how this elitist, exploitative insult could have been passed off as socialism, as a society where each will produce according to ability and consume according to need. In any case the norms were often as crazy and illusory as the propaganda behind them; during 1937/8 some 60 per cent of Russian workers could not meet their quota, let alone come up to the Stakhanovite standards.

This harassment, on top of what workers expect as the everyday burden of exploitation, was imposed on the Russian workers with scant opposition from, and often with active support of, their trade unions. During Stalin's rule (and of course it is still so today) the official line was that, as Russia was a workers' state, the workers did not need to be protected from it. The unions role was to lubricate their members' exploitation by stimulating production, organising something chillingly called "socialist competition" in the workplace, ensuring that the contributions kept coming in for the "voluntary" state bonds. Seventeen years elapsed between the 9th and 10th congresses of Russian trade unions, during which time the screw of exploitation was tightened by measures such as the abolition of the seven hour day and the laying down of harsh penalties for absenteeism and lateness.

In spite of everything, the Russian workers did not take the Stakhanovite insult lying down. There was much resentment at the attention paid to them, when their apparently higher production was due to unusually favourable conditions and in any case resulted from the joint efforts of their anonymous, unhonoured, work mates. There was anger also at the privileges reserved for the Stakhanovites. In the time honoured tradition of Luddism, there was some sabotage of production and some cases of assault, even perhaps of murder, of Stakhanovites. Reality was, then, nastily different from Stakhanov's airy boast that "For the Soviet people work has become a pleasure".

For fifty years, Stakhanov's image has persisted as an example to the rest of the workers to co-operate enthusiastically in their being robbed of the fruits of their labour. Russian television, commemorating the movement's anniversary, emphasised the continuing usefulness of the Stakhanovite principles and Donetsk miners agreed to put in some extra work as their contribution to the celebrations. Gorbachev recently warned industrial officials that they would be sacked if they did not find new ways of increasing output instead of relying on injections of state investment. "We cannot and will not support those leaders who are oriented towards previous ways, old fashioned norms" he said. Hard work; moderate wages; patriotism; a devotion to the interests of the class which represents us; these are, and have long been, of value to the capitalist class throughout the world. That is why Thatcher launched her campaign about "Victorian values". It was why the employers in this country welcomed the hysteria of "I'm Backing Britain" in the 1960s. It is why the capitalist media praise the "common sense" of the workers who volunteer for wage cuts and harder work so that their employers' profits may survive.

These similarities between Russia and other, avowedly capitalist, states can be explained only on the understanding that all of them operate under the same social system. Whatever superficial differences there are between one country and another capitalism, with its social structure based in ownership by one class and exploitation of the other, exists in Russia just as in America, Britain, Germany, Japan . . . And no class in human society can hope to achieve its emancipation by tightening the screws on itself.
Ivan