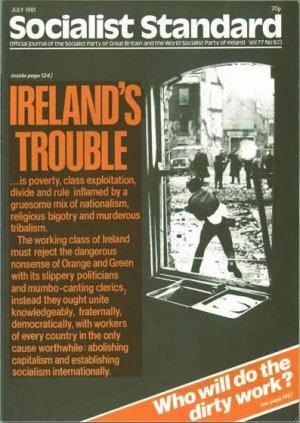 Editorial from the July 1981 issue of the Socialist Standard

The British Left has taken a new hero to its heart. Though born into the English peerage with an inheritance that he did not throw aside with his title, this man is said to represent the true and radical voice of the working class. Though a Minister in a government under which the number of unemployed doubled and Britain's stockpile of nuclear weapons increased enormously, we are told that this man will ban bombs and create jobs if only he gets the chance. Although a professional Christian, our hero is considered to be a Marxist. Having supported the last government's five per cent incomes policy, we are informed that the unions have no truer friend than this man. It is true that the People's Friend served in a government which presided over an increase in the concentration of wealth owned by the richest one per cent, but then, he does stand for a fundamental redistribution of wealth, doesn't he?

At bus stops up and down the country old ladies are quivering at the thought of the impending Bennish Revolution. Writing in The Sun (4/6/81), Paul Johnson makes it clear that 'unlike any of his rivals, Benn knows exactly what he wants and how he is going to get it. His is not interested in office . . . (Why, of course not. If he were he would have accepted a Ministerial post, wouldn't he?) . . . He wants power—the power to change the nation fundamentally.' So Sun readers be warned. Vote for TB and your nation will be changed fundamentally. Don't bother to ask what that means. Just shake with fear. After all, most of us are so deliriously happy in this best of all possible worlds—with its poverty and bombs and dole queues—that fundamental change is simply not playing cricket. The media loves to have a bogey man to feel threatened by, especially when the threat of real change is a fiction and personified in such a gentlemanly soul as a lapsed Viscount.

Just as some workers are led to fear this imaginary threat, so others are led to regard it as their greatest hope of salvation. Tony has come to redeem the children of Labour from the tyranny of the Right-Footed monster (who used to be a Left-footed monster until he met the pastry chef at Number Ten). The Socialist Workers' Party has announced that a victory for Benn will be progressive. The International Marxist Group has taken the next logical step and urged its members to join the Labour Party and do what must be done for the heir apparent. Followers follow with all of the passion of next week's roast mutton. It is radicalism gone flat, with ears to the keyhole of the NEC taking the place of any thought of self-emancipation.

History is not made by great men. Indeed, there are no great men. Great men are the inventions of politically myopic journalists and indolent historians who cannot be bothered to look for real causes. There are great myths and often men and women are motivated to put great faith in them. One such myth is that leaders can create democracy while those who want it need do no more than cheer from the sidelines and drop mental blank cheques into the ballot box. As if liberation can be achieved while the minds of the liberated are still chained to the illusions of class society. As if the mighty are high for any reason but that the meek are holding them upon their shoulders. A leader cannot lead unless there are followers to follow.

Socialism—which is what Brother Benn claims to stand for—can have nothing to do with following. You cannot be a socialist and have a leader. You cannot be a socialist and be a leader. Socialism means self-emancipation of the working class by the working class. Only when a majority of workers understand and want it will socialism be a practical possibility. It is all a question of consciousness allied with democratic political action.

Good or bad intentions do not enter into it. Maybe Leader A is a nicer bloke—or less of a swine—than Leader B. It is irrelevant. It is possible that Benn will try hard to do what he thinks will be in the interest of 'the people'. Good motives do not stand a chance against the limits of historical possibilities. Capitalism cannot be reformed into Benn-evolent socialism, even if Tony does say his prayers before he goes to bed every night. Similarly, if the press is correct and our gallant hero is a Phony Tony, that is no concern of the working class. Leaders can be good, bad or indifferent, but they will still do the same thing. They were elected to run capitalism for the capitalist class. That is what they will always do for as long as they are allowed to.

The Socialist Party of Great Britain has never had time for leaders who aim to come into the working class political movement and get socialism on our behalf, especially when such leaders are jumped-up moralists from the bourgeoisie. In July 1906 The Socialist Standard had the following words to say on the subject:


The middle-class mean 'converted' to Socialism is generally a source of grave danger to the working class movement. Fastening upon the cruder manifestations of working class instinct—he gives this instinct a Bourgeois Reformist turn and so hampers its growth. As 'breadth of thought' and 'toleration'  he conceals the shallowness and superficiality common to his class: under the name of socialism he preaches State-Capitalism. In place of Revolution he urges Reform. Upon the half-hearted and partially conscious efforts of the workers to organise the political party of their class he fastens as a 'leader'—and all development is arrested. Hence we are not concerned about the 'middle-class converts' to Socialism.

Maybe Benn will displace Foot. If he does, it will not take him long to shock his fans and pacify his critics by acting in just the way that every useless Labour Prime Minister has done in the past. Then he too will be rejected as a traitor and another radical hero will emerge to stab him in the back. Opportunist leaders come and go, and while they plot and intrigue and pat themselves on the backs, the followers, on whose backs they have been riding, should be taking a tip from Prince Charles's horse.