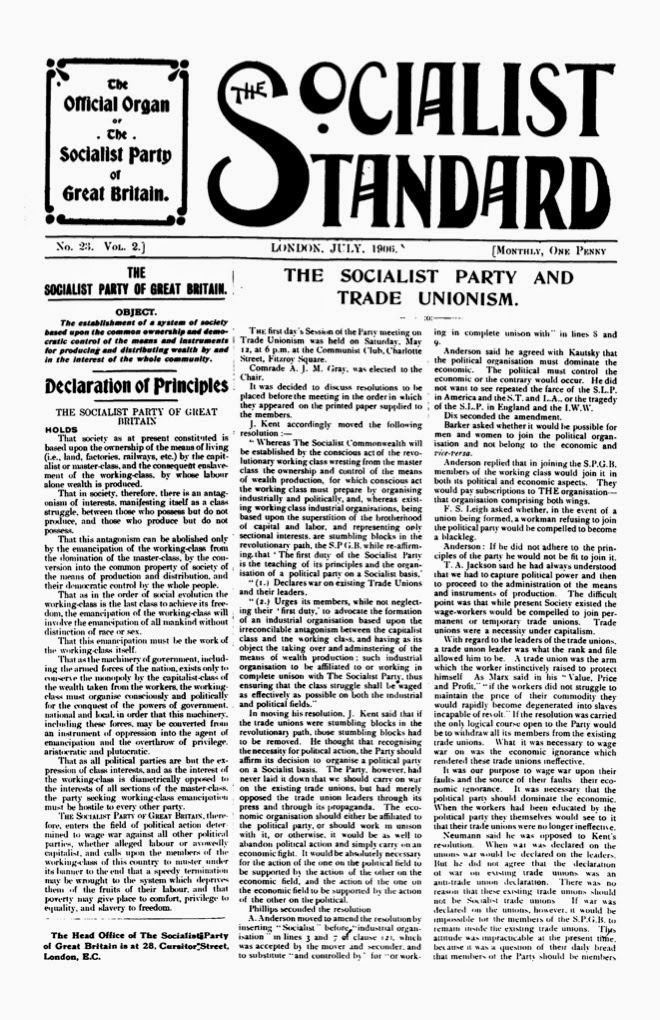 From the July 1906 issue of the Socialist Standard

No point in the Socialist philosophy arouses such controversy as that of the “class-struggle” and “class-consciousness.”

The confusion prevailing is only intensified by the use of these phrases by those who, while claiming to be Socialists, have altogether failed to grasp the meaning of the term. For example, the Rev. Conrad Noel recently filled the better part of a column in the Daily Chronicle with a criticism of that “over-insistence ” upon the “Marxian Dogma” which has “done the cause of Socialism so much harm.”

This criticism formed part of an article on the S.D.F., and the one thing the Rev. Conrad most objected to was the use of this term “class-consciousness.”

“In the mouths of S.D.F. speakers it always means ‘artizan-consciousness,’” he argued. This may well be—but it only proves, what readers of THE SOCIALIST STANDARD know quite well, that the S.D.F. speakers do not understand the Socialism they profess. The S.D.F. uses Marxian phrases and fails to comprehend them; it employs the words of Revolution and the tactics of Reaction—the language of the proletariat and the deeds of the bourgeoisie.

[And it is as well to note that the Rev. Conrad Noel has since announced his intention of applying to become a member of the S.D.F.—“though not a ‘class-conscious’ one.”]

His objection to the word “class-conscious” is twofold.

Firstly, it is, he thinks, impossible to reconcile the conflicting interests of the various sections of the working-class (clerks, artizans, labourers, &c.) and secondly, that “converts to Socialism from the ranks of the upper and middle-classes are a trifle puzzled—of what class are they to become conscious?”

The point here raised is crucial. Those who hold to the conception of the class-struggle logically deduce therefrom their revolutionary policy; those who deny or (what in practice comes to exactly the same thing) fail to comprehend it must adopt the attitude and policy of Reform and Compromise. What then is the meaning of this term “class-consciousness?”

At a certain stage in the life of every individual he acquires a “consciousness” of personal identity. He becomes aware of his distinctiveness, physically and mentally, from the external conditions which progressively stimulate his susceptibility to impressions, and possessed of a power to recall, combine, and analyse by successive stages of mental presentation these said impressions and emotions.

This sense of individuality, this power of ordered thought (briefly “consciousness”), is the result of the development of the requisite brain-organ; and, as each individual from conception to maturity successively reproduces the stages through which the species as a whole has passed, by comparison we can ascertain the relative degree of development reached by any individual.

When an individual has become “conscious”—has, that is, arrived at that stage of growth at which he perceives both the distinction and relation between himself and the rest of creation—he has acquired a power of reacting upon his environment; a power (limited but real) of “self-determination,” within, of course, the possibilities set by his physical powers and the said environment.

Society is an organism progressing through stages of development.

The present stage is that in which classes have been differentiated within the Social organism: the propertied bourgeoisie and the propertyless proletariat.

Whether they are aware of it or not their interests are conflicting. The workers fulfil the function of production, i.e., their associated labour adapts all natural resources to human use; the Bourgeois or Propertied Class retain ownership of the tool of production, appropriate the products and control the function of distribution.

Just as the chicken developing within the shell is compelled as a condition of further existence and development to burst the shell which had till then served as a necessary condition of further growth, so the working-class will sooner or later become conscious of this hindrance to their development—become conscious that they are the only useful class and progressive force in Society—conscious that they are potentially, the Society of the Future, and bursting the shell of Bourgeois political control and consequent economic domination, act themselves (and Society) free to commence a new and higher stage of evolution.

In a word: when conditions are ripe the working class will acquire, with the recognition of their place in Society, and of their constraint and that which constrains them, and a perception of the vital organic force impelling them to struggle, their consciousness as a class—their power of “self-determination.”

To make the working class thus “conscious,” it is necessary to make it understand the relation between it and the rest of (i.e., the other classes in) Society.

To achieve this result in the class, an effective of the individuals composing it must acquired the capacity of seeing, behind apparent diversity of interests (as clerks, spinners, hammerers, and diggers) their real community of interest as a class—must have recognised their common subjection to the necessity of selling their abilities in a common labour market; their consequent common exploitation, and their common interest to emancipation as a class.

Such distinction as still survives between “skilled” and “unskilled” labour is being rapidly abolished by the extension of education on the one hand and the introduction of machinery on the other. And few know this better than the “skilled” workmen themselves.

Hence Conrad Noel’s objection concerning the diversity of interests among the working class has no foundation. With regard to the vague use of Marxian terminology by Reformers posing as Revolutionists it must be noted that the stage at which a worker is brought to recognise that he is exploited by his particular employer, or he and his fellow-workers in their particular industry by their particular group of employers, is not the stage of class-consciousness—it is but the stage of class instincts; the rudimentary possibility of subsequent consciousness.

Class-consciousness on the part of any one worker thus entails the recognition by him of his place as a unit in a class, at present politically ruled and economically enslaved, whose historic mission it is to carry Society forward into a higher stage of development: the recognition that the interests and therefore impulses of the individuals composing either ruling or ruled classes respectively are mutual and those of the two classes antagonistic, and consequently that the development of Society more and more produces a class-struggle for the possession of political power as a necessary pre-condition on the one hand for rule and on the other for emancipation.

The working-class-consciousness will express itself in a political organisation for the purpose of accomplishing this emancipation. That worker is class-conscious who has seen the duty of enlisting under the banner of Revolution—in the Political Party of the workers —the Socialist Party of Great Britain.

With regard to the Rev. Conrad Noel’s second objection little need be said. The Capitalist-class will only be converted to Socialism by the Social Revolution; the middle class by the Official Receiver—any isolated individuals from these classes who may enlist under the banner of Social Revolution by so doing desert their own class-standpoint for that of the working-class. They must accomplish the feat of lifting themselves intellectually above their own class-environment to the height from which, comprehending the process of social-development as a whole, they can foresee the inevitable triumph of the despised proletariat—a feat that few have the intellectual power to accomplish.

The middle-class man “converted” to Socialism is generally a source of grave danger to the working-class movement. Fastening upon the cruder manifestations of working-class instinct—he gives this instinct a Bourgeois Reformist turn and so hampers its growth. As “breadth of thought” and “toleration” he conceals the shallowness and superficiality common to his class: under the name of Socialism he preaches State-Capitalism. In place of Revolution he urges Reform. Upon the half-hearted and partially conscious efforts of the workers to organise the political party of their class he fastens as a “leader”—and all development is arrested.

Hence we are not concerned about “middle-class converts” to Socialism.

Socialism is possible when the workers, organised in the Socialist Party, proceed to establish it. When they do that, the whole of the “upper and middle” classes will be powerless to prevent them. Without the workers so consciously organised nothing can be done.

Hat tip to ALB for originally transcribing this article from Tommy Jackson. Posted it because it was quoted approvingly in the 1981 article, Benn: the heir apparent.

Funny that that quote would be so disparaging of the 'middle-class' type latching themselves onto the workers movement when Jackson spent so many years of his political life kissing the arse of the likes of Palme Dutt.