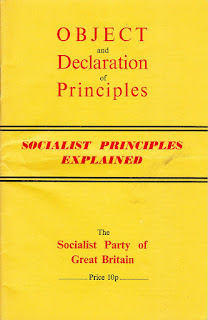 The original pamphlet under the title The Socialist Party of Great Britain—Its Principles and Policy was first published in 1934 and ran through four editions up to 1956. It has been out of stock since the mid-'sixties. Therefore this new pamphlet Socialist Principles Explained, is long overdue. It is completely re-written.

It is overdue also in the political sense as a counterblast to the confusion and total lack of principle, which characterize all the other political parties. They are all dedicated to the expedient of the moment. They all depend upon working-class apathy and political ignorance, to continue their mandate to run capitalism.

It speaks volumes for the great gulf of differences which separate the Party for Socialism from the reformist parties (whether alleged labour or avowedly capitalist) that we, in 1976, enthusiastically proclaim the validity of our Principles, which were drawn up in 1904, while they cannot remember any further back than the last election and have no real commitment to anything they said last month.

Our Declaration of Principles identifies the class division in capitalist society. It shows why class antagonism must remain for as long as capitalism remains. It points to the ending of classes and class antagonism through the establishment  of common ownership of the means of production and distribution. It records the historic fact that capitalism is the last class system and repudiates all leadership. It makes clear the nature and function of the state machine and the need for a conscious working class to democratically gain political power in order to overthrow capitalism and thereby end political power. It shows that logically political parties must represent class interests and that no party can represent both the working class and the capitalist class, because their interests are conflicting. There can be only one Party expressing the interests of the workers.

The new pamphlet develops all these points with concise argument. For those countless people with a vague and emotional attachment to changing things and solving social problems, it sheds a flood of new light on the world because it supplies the answer and explains principles. As we say in the Preface, it is essential reading for those considering applying for membership. As only clear-thinking Socialists can work for Socialism, the most vital need is to spread Socialist understanding. This pamphlet makes a valuable contribution to that end.