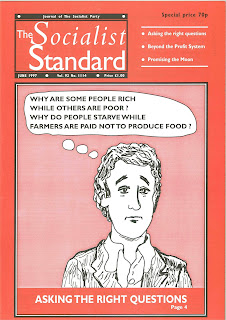 From the June 1997 issue of the Socialist Standard

For example, given the question, "Should I support the government of the day or a new government, much like them?", it is inevitable that the result, inherent in the flawed question, will lead to an effective non-choice between more of the same and more of something similar. Again, the question, "Should we federate within the European Union?" carries within it enough wrong assumptions to guarantee a useless answer. Who are the "we" in question: British millionaires or British wage slaves? Do both have common interests? Do workers have any interest in which trading bloc their bosses join? But, by confining the question to the narrow issue, the answer is bound to lead the questioner astray.

So, before seeking great political solutions, the task is to raise great political questions. These are not likely to coincide with the questions raised by the mass media. These tend to be narrowly based on the agenda of the capitalist system and its immediiate problems. So, media discussion is rather like observing the fire brigade at work after a bomb has exploded. Questions about who saw it in their interest to make the bomb and why they decided to do it and what other options they had are relegated to the margins. The mass media dismisses such 'why' questions as being too obscure. They want to know who planted the bomb, when it went off, how many people it killed or injured, what the scene of the fire fighters and the flames look like. An election—just like the recent one—might well be described as a competition between rival fire brigades to hose down the flames of the inferno, the cause of which is of no concern to them.

The most illuminating questions are those which concern cause and effect. These are the questions which have traditionally interested scientists. Had Newton's response to the apple falling been to merely study the effect and ask, "What's the best remedy for a bump on the head?", his enlightening thoughts about gravity might not have occurred to him. For most of us, it is the occurrence of regular metaphorical bumps on the head (experience, in short) which leads us to ask the question, "Why is this happening?"

Political headache
Here are some good examples of how experience determines questions:

A man is employed by Ford for twenty years. He is skilled and he needs the money in his wage packet. One day he receives a notice with his wages telling him that the job's finished. He is to be made redundant. Capitalism has given him its version of a thump on the head. What does he ask himself? He has a range of questions which he could ask: "Why is it me losing my job and not the other worker who is a different age, colour, gender . . .?" This kind of question (scapegoating) will only lead to frustration and bitterness. Or he might as, "How can I beg for my job back? Could I convince my employer that I can become even more productive for even less money?" This is the desperate reasoning of the wage slave. How about asking a few more useless questions:"Where was God when I needed him?" or "Why can't I get the right numbers for the lottery now that l'm down on my luck?" Some people spend years entrapped by such useless questioning. They end up with huge political headaches and a conviction that asking questions leads nowhere.

Someone has a small business and a mortgaged home. The business goes bust because other small businessmen are unable to pay their bills on time. The bank is owed money. The business folds. Without a business income the mortgage payments fall into arrears. The family home is repossessed by the bank. Once again, the array of useless questions which could be—and often are—asked is huge: "Why weren't the other business men more prompt at paying their bills? Why wasn't the bank more flexible? Why should my family suffer from being homeless when I have done nothing but work my fingers to the bone? Why should this happen to me and not the people who own supermarkets?"

The need for these people, and millions like them suffering to a greater or lesser extent from social problems, is to ask the right questions. The right questions are ones which go to the root cause of the problem. Imagine going to a doctor with a pain in your leg: "Shall we cut your leg off or pray for a miracle relief?" she asks. Any sensible sufferer will soon be limping out of the surgery of such a lunatic. Any serious scientist will want to know the cause of the pain.

Religious people have their own answer. The cause of humanity's pain is original sin. Why is life full of woes? Because Eve was tempted by a snake to eat an apple. Well, if that kind of fairy story satisfies you there is little point in looking for further root causes. Why Hiroshima? Why the gas chambers? Why do millions of innocent children starve to death? Blame Adam and Eve. The Fall of Man. Human Nature. This is the most erroneous causal explanation in the history of ideas. It is a humanity-hating analysis which substitutes self-blame and guilt for more reasoned questioning.

The root cause
The socialist takes the opposite approach to questioning. We ask, "What is it about the way that society is organised which leads to effects which repeatedly harm so many people?" The same question could well be asked by people who are not socialists. Answers could range from "Because the government is lousy and we need a new government" to "Because there are too many people being born." All of these imagined root causes have been put from time to time. They are all wrong. Governments come and governments go, but still the basic social system remains. In fact, the system governs the government and not the other way round—as Messrs. Blair and Brown will soon come to realise. What these fail to do is address the nature of the way society is organised at root.

Put simply, we state that the current social system is one which puts production for profit before production for human needs. Why does it do so? Because a minority own and control the productive resources of society and will only allow these to be used as long as they are making a profit for them. How do they make profits? By getting the majority of society, who own little but our mental and physical energies, to work for them in return for wages or salaries which amount to less than what we are producing. Why does the majority work to make profits for a minority? Because they have yet to question why it is that their problems arise directly from a social system where minority profit comes before majority needs. And a good deal of money and energy is devoted to diverting the majority from asking such dangerous questions.

So, in an age filled to the brim with awful social problems and countless wrong solutions, let's conclude with some questions rather than answers. Think long and hard enough about the right questions and the answers will take care of themselves.

Why are we living in a society capable of producing enough to feed, clothe and shelter everyone, yet millions are deprived of these needs being satisfied and hundreds of millions face relative poverty?

Why is production of goods and services geared to sale on the market with a view to profit rather than solely to meet people's needs?

What kind of a society could we have if production solely for use replaced production for profit?

If the socialist alternative of common ownership and democratic control of productive resources, and production for use, is so sensible, why aren't millions of people insisting that we organise society on that basis?

Why not do something about working with other socialists to raise these vital questions and act upon the answers?
Steve Coleman
Posted by Imposs1904 at 3:10 PM