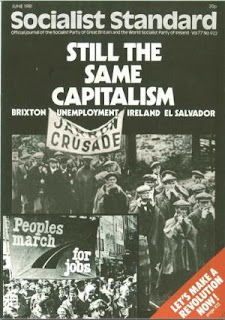 From the June 1981 issue of the Socialist Standard

After the riots, the deluge. As the fires died in Brixton, the smouldering passions there were doused in words hosed out from all kinds of social and political analysts. Most of them claimed dolefully that they had been expecting just such a thing to happen for a long time; all of them were alert with theories about the causes, and thereby with suggestions to stop it happening again.

One who did not offer any analysis was the very man in the whole of Britain who might be expected to know more about civil disorder than anyone else—Home Secretary William Whitelaw. But apparently he had so little idea about what happened and why that he had to set up an enquiry to tell him. In charge of the enquiry is Lord Justice Scarman, who did similar jobs on the Red Lion Square confrontation in 1974 and Grunwick in 1977 and who, if he doesn't get a rest from it soon, may come to think that open air life in London is about as peaceful as the North Bank at Highbury when Spurs are playing there.

The analysis of the Brixton riots covered a pretty wide field. On the one hand there was the Labour leader of Lambeth Council, Ted Knight, whose role in the affairs of London becomes daily more obscure as people begin to wonder whether he is a councillor or a comedian. Knight declared (Guardian, 16/4/81):

We went to see the commander of the police tonight to demand that he withdraw his men. He won't do it.

And he then went on to advise:


... a future Labour government must dismantle the Metropolitan Police and replace it with a new force "responsible and answerable to the working class people".

Knight is one of those "practical socialists" who, while not actually being delirious, suffer from these dreams in which the police don't have to be a coercive, property protective force but can assert the minority privileges of capitalism in the interests of the unprivileged majority , This is a common sort of delusion among "practical socialists", who deceive themselves that capitalism doesn't have to be capitalism—and Knight's problem is that when he talks like this he is not joking.

On the other hand there was the reaction of Margaret Thatcher—and nobody is in any doubt by now about her role in capitalism's affairs. There was no surprise when Thatcher resisted the invitation to agree that pressures like racial discrimination and unemployment could have influenced the riots. And in between Knight and Thatcher there were the senseless trendies and liberals, like the teachers who tried to get the NUT Annual Conference to debate an emergency motion which called for the restoration of government grants for housing, education and social services.

One thing all these analyses hold in common is the notion that basically there is nothing wrong with capitalism. They all agree that the priority is not to abolish the system but to patch it up; any conflict between them is over how much patching up is needed, and where, and whether it can be afforded right now. The most visionary among them misconstrue Brixton as the result of malignant government policies and harsh police methods; the least visionary misinterpret the riots as .the malignant response to a benevolent, natural order of things.

From this it is clear that capitalism is OK; Whitelaw would hardly have chosen anyone who was likely to say differently. The Home Secretary is a tirelessly courteous man who resembles a friendly sea lion but that should deceive nobody. His plump, fatherly demeanour hides an iron determination to do as capitalism requires, at whatever cost to an undoubtedly kindly disposition.

How then should an enquiry into Brixton proceed? Well first there is the character of the place and the question of whether this is unique or even unusual. Brixton is not one of the world's beauty spots. Arterial roads suck in heavy traffic; there is the prison of grim infamy and, near the Town Hall, there is Rushcroft Road, where the fascists once jammed the streets with their malignant prejudices. The area was largely an Edwardian development and it has streets of substantial villas of that period, now run down and multi-occupied by the more depressed strata of workers. A study of the southern part of Lambeth in 1976 found 18 per cent of the housing in poor condition and 42 per cent of the people there in shared accommodation. These statistics represent workers whose deprivation is such that they must concentrate where the rents are lowest, even if that also means where the walls are damp, where the rats run and the floors are rotten. For these workers, survival takes a desperate toll; they are capitalism's social misfits or its unemployable—single parent families, weary pensioners and, inevitably, immigrants.

Like many parts of London, Brixton has immigration written into its history and by no means all the immigrants have come from what is evasively called the New Commonwealth. But it did receive the first imported workers from the West Indies in the early fifties, and they have stayed, raised families and are easily identified by other, similarly desperate workers venting their frustrations on the most accessible scapegoat.

So, Brixton has become famous for tension as well as for its seedy buildings and its street crime. The Metropolitan Police say that Lambeth ranks second in their entire area for violent crime: in 1980 they recorded 2859 cases. In 1975 a police report stated that 80 percent of muggings—quick, violent, usually small scale street robberies—were committed by young blacks and that 85 per of the victims were whites. These figures were triumphantly used by racist organisations like the National Front, would not be anxious to emphasise inherently subjective element involved in any criminal statistics. Workers who were already in a panic at the decline in the fabric of the area might have concluded that they were surrounded by black thugs, that 80 per cent of the black youngsters were muggers. But the same report said that only 4 per cent of youngsters were involved in street crime, suggesting that the overwhelming majority of them keep to the law.

Brixton's street crime gave it a deserved reputation for being about the most intensively policed part of London. It regularly returned the highest figures, outside the West End; for arrests for Sus, the offence which ropes people in not for actually committing a crime but for a couple of policemen think that they are contemplating one. Brixton has also had unusually frequent attention from the Special Patrol Group, which stopped thousands of people in the streets for spot checks and arrested hundreds of them. The police justified these tactics by a sharp fall in reported street but in the process, to some extent, they replaced the muggers' violence with their own. Contact with the SPG is not a tranquilising experience. Brixton bubbled like a volcano; the police tried even harder to hold the top down but in the end it had to blow up.

The riots were seen by many workers as authentication of the doom laden prophecies which have emanated from Enoch Powell, beginning with his infamous 1968 Birmingham speech in which he foresaw "the River Tiber foaming with much blood". Perhaps Powell feels that his reputation for rigourously logical thinking has been sustained. But there were others who also foretold the trouble which can be expected from crowding a specially depressed population into a decayed area and subjecting it to pressures such as racial discrimination, chronic poverty and state violence. Powell's contribution—if it can be described as such—is to blame the riots, and indeed much of the conditions in which the riots happened, onto the skin colour of the rioters. The famous logician Powell is here indulging in the fallacy of a self-fulfilling prophecy, which may be comfortable for him and which may appeal to the more ignorant and prejudiced among the working class but which is not logical or reasonable .

Even Scarman will probably be aware that Brixton is not unique, either now or in the past. In 19th century Britain, for example, the appetite for labour stimulated by the Industrial Revolution drew masses of Irish workers to this country. They came mainly to escape from the appalling famines in Ireland; with only their working abilities to sell for their living they came looking for employment, cramming into towns like Liverpool, Manchester and Glasgow. By 1851 they made up nearly 3 per cent of the population and, doing mainly unskilled work in textiles and building, they were in competition with equally desperate English workers for jobs and housing.

These were the roots of the discrimination which was practised against the immigrants, with "No Irish" signs up at .the windows and 'employers keeping English and Irish workers apart to avoid trouble at work. Even so there were riots and battles over many years, as one group of degraded workers fought with another over who should be exploited and repressed at one particular place and time. By the end of the century the Irish had become largely absorbed but they had been replaced as the butt of popular prejudice by the Jews, with an Enoch Powell—Tory MP Major Evans-Gordon—rousing mob ignorance for his own political advantage.

Then, as now, deluded workers were avoiding the reality that problems like slums, unemployment, poverty and competition for jobs cannot be laid at the door of an immigrant work force. Capitalism both creates the demand for that work force to be mobile and the urban concentrations in which it must try to survive. For capitalism works by the production of profit, which means by the exploitation of the majority of its people. For capitalism, profitable is beautiful: cheap is beautiful; so often slums are beautiful; conflict is beautiful; ugliness is beautiful. Brixton is beautiful.

And all of this, in 1981, can come into focus on the streets of some urban desert, when a black youngster is stopped by a policeman whose uniform gleams with the authority of one whose job is to protect the minority rights and privileges of the capitalist class which is responsible for the desert. If that same policeman also represents working class prejudices he may treat the youngster to some racist insults. If the focus becomes sharper, like the rays of the sun, there can be a conflagration in which those youngsters might feel that in some undefined way they are getting some of their own back as they riot and burn and loot.

And in that too there was an irony, in Brixton, because as a working class area, the shops specialise in the tawdry rubbish which is all that impoverished workers can afford. The looters were not getting their own back; in what they thought of as their freedom to take what they liked they were in fact affirming their own degradation. .

The conclusion of this enquiry then is that Brixton is not unique in either time or place. There have been many other, similar, riots in many parts of the world and there will be many more for as long as capitalism continues to exploit and repress the majority in the sordid interests of the minority. Here are the roots of Brixton's agony; they will not be approached by any official enquiry no matter how rigorous. The workers of Lambeth, of London and of the world are in a crisis which it is in their own power to end and they should need no judge to tell them what is wrong with society.
Ivan
Posted by Imposs1904 at 6:37 AM