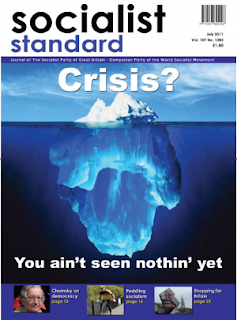 The Pathfinders Column from the July 2011 issue of the Socialist Standard
The political fall-out continues from the Fukushima plant as radiation levels continue to be revised upwards and the problems continue to cascade, with each solution itself presenting a new problem. Neighbouring states glare balefully as the Japanese now try to justify dumping 110,000 tonnes of  radioactive water into the local fishpond. Meanwhile governments across the world hold Nuclear Safety Reviews in a fever to satisfy worried populations that they are not being as careless over nukes as they usually are over everything else.

The UK’s Chief Nuclear Inspector, Dr Mike Weightman, has been hurriedly asked to do a review of all nuclear facilities, and has delivered his interim report (Link). The bemused Dr Weightman sees ‘no reason for curtailing the operation of nuclear power plants or other nuclear facilities in the UK’, no doubt because category 9 earthquakes and giant tsunamis tend not to happen in Britain very often.


However this hasn’t stopped the Nuclear Free Local Authorities pressure group, together with the Greens, from trying to whip up the anti-nuke fever with a briefing seminar at Westminster on the future of nuclear new build (http://www.nuclearpolicy.info).


Now the EU is even talking about a nuclear-free Europe, after Germany and Switzerland have announced the winding down of their entire nuclear programme and Italy has just overwhelmingly voted against nuclear energy in a landslide referendum (BBC Online, 14 June).


Folks with long memories were probably surprised at the renaissance in recent years of the nuclear option. There was a time when the anti-nuclear lobby seemed to have won the argument, or at least the contest for public opinion. The anti-nuke brigade had always got its biggest boosts from accidents at nuclear power stations, notably at Windscale in 1957, later at Three Mile Island in 1979, and of course famously at Chernobyl in1986.

Older Britons might remember having to pour all their milk down the sewers in Lancashire in 1957, but it was a shock to have to do it again in 1986 because of a leak the other side of the world. From this last disaster the pro-nuclear lobby seemed destined not to recover. Soon after this the German Greens saw a large increase in their support and the Green Party in the UK had its peak electoral success. But the opposition would not last indefinitely.


Indeed it was the very success of the environmentalist agenda itself which began steadily to erode the consensus against nuclear power. It was after all the only realistic alternative to fossil fuels, and there wasn’t much doubt among experts that fossil fuels were implicated in global warming.


While environmentalists protested loudly about viable alternatives it was clear to many that these didn’t amount to much in practice. As solar, wind, geothermal, hydrogen and other more exotic technologies continued to make little headway, the debate remained a two-horse race of fossil versus fission.


The problem is that nothing comes close to fossil fuels for reliability, adaptability or energy conversion efficiency, while alternatives are always piecemeal solutions which cost a fortune to implement and maintain, and for comparatively low returns.


Short-term governments dislike sinking money into projects with long-term gains (for which they won’t get the credit) when there are always more immediate demands for cash (for which they might). So all the most viable sustainable energy technologies continue to contribute negligible amounts to global energy requirements and where they contribute more, like hydro or biofuels, they end up causing massive environmental or social damage of their own. If there is any major technological advance it is not likely to come from the so-called viable methods but from some less likely source, as Scientific American argued in May this year.

So, as the new century dawned and no new technologies were found and significantly, no new Chernobyls occurred, people began listening to the pro-nuke assurances that ‘lessons had been learned’ and ‘technology had progressed’. As old installations neared their pension dates and the question of replacement became pressing, governments talked bullishly about expanding their nuclear build, confident that the people would accept the least-worst option, with resignation if not enthusiasm.

Then Fukushima. And what it has showed is a fundamental split between what governments want and what populations want. The real problem that faces the world’s governments, and by extension the various warring parties of its ruling class, is nothing to do with the environment. It’s the ability of some countries, notably Russia but also China, Venezuela, the Gulf states and potentially even Norway and  Canada, to hold the world to ransom through their ownership and control of oil and gas supplies.


The recent Gulf wars, together with Russia’s trigger-happy hand at the gas tap, have persuaded every economic bloc that it’s either Do It Yourself nuclear or Do As You’re Told fossil imports. And for a bonus, with nuclear power you can get nuclear bombs, as the mullahs in Iran are keenly aware. In any conflict with your neighbours it’s much more effective to throw lumps of plutonium than lumps of coal. Thus, with the global balance of power at stake, nobody’s much interested in the environmentalists and their windmill schemes.


And this is the nub of the matter for socialists. Global energy policy is not being driven by concerns about the environment, however much governments dress the thing up in a pretty green frock, it’s about ownership and control of key resources, who has them, and who’s got the weaponry to seize them.


In capitalism such conflicts are endemic and often end up as wars, but in socialism, where by definition resources are shared and controlled by the collective human race, the problem would be a simple technical one uncomplicated by geopolitical or military questions.


Can nuclear power ever be safe, and even if it can, what do we do with the waste? Can a mix of sustainable resources really meet local needs and what are the environmental or social costs? Can wholesale reduction in consumption, facilitated by non-market production methods, help solve the  problem? Will fusion ever work? Is there something we haven’t thought of yet? Well there is something the world hasn’t thought of yet.


The only way to take politics out of the energy question is to take capitalism out of the equation. Of course capitalist governments are not going to entertain that option. But we ought to.