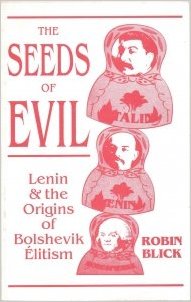 Book Review from the January 1995 issue of the Socialist Standard

The front cover of this book shows a Russian doll. The top one is Stalin, underneath is Lenin and underneath Lenin is Robespierre, the jacobin dictator who ruled France briefly in 1794. The theme of the book is that Lenin's elitist view that the workers needed to be led, and then ruled, by a vanguard party of professional revolutionaries had nothing in common with Marx's theory of the democratic self-emancipation of the working class, but derived ultimately from an organisational form developed to further the bourgeois minority revolution in France.

Blick sets out to argue:


"(a) that Leninim's claims to Marxist 'orthodoxy' are bogus;
(b) that Leninism 9in whatever of its versions or mutations) was and remains, by virtue of its assumptions and ethos, an elitist and totalitarian doctrine, capable of creating, whatever its subjective intentions, only elitist and totalitarian societies, in which the proletariat either becomes or remains a politically repressed and economically exploited class;
(c) that, consequently, Leninism constitutes a monumental and tragic hoax perpetrated on countless millions of oppressed and exploited human beings, not only in Russia, but throughout the world."

We would agree with every word here. After all, we've been saying the same thing ourselves for years. In fact there is very little in the whole book that we would disagree with, including the demonstration that the Bolshevik seizure of power in November 1917 was not a "working class soviet (workers' council) revolution" but a military coup engineered by Lenin, Trotsky and the Central Committee of the Bolshevik Party.

Although, as Blick points out, the pretensions of Leninism are now only defended in the West by "a dwindling fraternity of third-rate intellectuals, Trotskyist zealots and Stalinist neanderthals", this book is one any Socialist should have on their bookshelf in order to be able to refute the twin lies that Leninism is a form of Marxism and that Leninism did not lead to Stalinism.