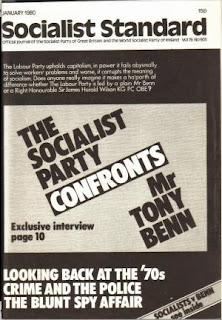 Party News from the January 1980 issue of the Socialist Standard


This speech was contributed by a student who is not a member of the SPGB, to a recent debate at University College, London, on the motion “This House Believes That Socialism is the Incestuous Child of Naive Idealism and Political Tyranny. ”
(The motion was proposed by a prominent member of the National Association for Freedom.)


MR PRESIDENT, IT HAS ALREADY BEEN DEMONSTRATED TO THIS HOUSE, BY MY COLLEAGUE, THAT ALL EXISTING SOCIETIES, INCLUDING RUSSIA AND CHINA ARE ABOUT AS “SOCIALIST” AS THE RED SEA IS RED, SO THE PROPOSERS HAVE PROCEEDED UPON MISCONCEIVED ASSUMPTIONS.

Socialism will be a system of society based upon the common ownership and democratic control of the means and instruments for producing and distributing wealth by and in the interest of the whole community.

Today, under capitalism, 10 per cent of the world population own a staggering 90 per cent of the world’s accumulated wealth; and nine of every ten adult humans are selling their time in exchange for what is overtly called a “living wage”. In socialism, everyone will own everything; private property will not exist. Just to take one example of how common ownership will work, the land on this planet will be as available to everyone as the sunlight is today. If we visualise the size of the earth and then remember that the world population could still be stood on the Isle of Wight we’ll realise that the common ownership of land is scarcely going to present any problems.


It follows from a proposition of common ownership that in socialism there will be democratic control of all production and distribution by society as a whole, which would be no problem, even today, with current methods of world communication.

With common ownership and economic democracy a socialist society would produce things to satisfy human needs and not to make a profit. In 1978 the EEC alone destroyed 30,000 tons of cauliflowers, 23,000 tons of tomatoes, 60,000 tons of peaches, 41,000 tons of apples and 16,000 tons of oranges, and this destruction at a time when one third of the people on earth are seriously malnourished because they can’t afford enough food to eat. The watchword of capitalism is “no profit, no production”, in other words food will not even be produced if it cannot be sold at a profit, even if this means that people have to starve as a result. Anyone who believes that capitalism can ever be made to work more humanely is being both naive and idealistic. In socialism there will be no waste or want as production will be solely to satisfy human needs and desires.

In socialism, the maxim “from each according to their ability, to each according to their needs” will transform the character and quality of human existence. People will be able to choose the sort of work they most enjoy and be creative to the best of their ability. People will be glad to give their best and take the best of everyone else as William Morris describes in his vision of socialism—News From Nowhere— in socialism work will become the ultimate form of art. In socialism we will be building houses, for instance, with a mind to safety, comfort and elegance rather than as now when houses are knocked together with maximum scamping and hideous designs to lower costs and thereby increase profit. Price and profit dictate in capitalism what pleasure and purpose will dictate in socialism.

In return for his or her work, everyone in socialism will have free access to all that is produced, to all services and all entertainments. People will take according to their needs, or more accurately their self-determined needs. As socialism will be a propertyless, moneyless society people will no longer have cause to be greedy or acquisitive. Greed, like envy and theft, is an axiom of capitalism. Who, for example, is going to take home 25 watches just because there is free access when you only need one watch to tell the time? Again, socialist production, unfettered by the need for a market, will be able to produce as much as it wants of anything at any time, so as there will be such continuous supplies and free access, hoarding in socialism will be about as sensible as keeping your own supply of air in polythene bags.

In socialism there will be an abundance of everything pleasant. Lately there has been much journalistic parroting about the earth’s so-called limited resources. One thing the media hacks mysteriously neglected to mention was the modest estimation in a 1978 report of the UNO that the world’s resources are sufficient in potential to feed, clothe and shelter three times the present world population. On the same theme the so-called “energy crisis” is, with all due respect to the Daily Express, simply a crisis about which governments are to take what dividends in the profits of certain markets. Still on the subject of why there will be such an abundance, it should be pointed out that to operate on this plentitude of resources, in socialism, people will be able to exploit the fantastic capacity of industrial technology. We will not have to restrain the use of something like the silicon chip, for fear of causing redundancies, on the contrary a redundancy of human toil in socialism will mean more efficient production and more time for leisure, it will not, as now, be a reason for misery. Even when industrial technology was 100 years less advanced than now, Oscar Wilde had this to say in his essay on The Soul of Man Under Socialism, he said “In socialism, all unintellectual labour, all monotonous dull labour, all labour that deals with unpleasant things and involves dreadful conditions will be done by machinery, and just as trees grow while the countryman is asleep, so while humanity is enjoying itself in cultivated leisure, machinery will be doing the necessary and unpleasant work.”

Apart from the unshackled use of industrial technology on the earth’s resources, people in socialism will also be able to benefit from the work of millions of men and women who had previously been employed in socially useless work under capitalism. The multitudes for instance, who were being trained by their governments in the savagery of war, or who were building death-machines, or who were stockbrokers, insurancemen or bank employees—the list is extensive. Plus those who, under capitalism, were involved in absolutely no work whatsoever, like the unemployed, tramps and, of course, the aristocracy.

For the same reasons that people will be producing such an abundance, production will enjoy paramount efficiency, and, for the greater part of their time, people will be able to do exactly as they please. In socialism, education will be voluntarily undertaken by children and adults because it will be a fascinating and useful pursuit. People will attend schools and colleges to cultivate their interests and refine their thoughts. They will, not, as now, attend to be inculcated from childhood with an orthodox framework of thought, nor will they attend to apprentice themselves as a better caste of wage-slave. Again, on a similar issue, in socialism, science will be used to assist humanity in its pleasure, safety and welfare. It will not be used to invent something like the neutron bomb.

In Socialism the natural beauty of the earth will be uncontaminated by industrial toxic waste. The earth is polluted in this way now as it is a cheaper and therefore more profitable - means of disposal than others. The interests of the whole community will be catered for under socialism and not the interests of a profit-hungry minority.

Socialist society will be void of instability and insecurity. People involved in administration will have the same standing as everyone else, and no reason to try and usurp power. Even if one or two maniacs wanted to, there would be no unemployment or poverty on the back of which anyone could ride to power. People in socialism will have no use for leaders. The terrifying threat of war will be unknown in socialism because there will be no artificial national boundaries, and no governments to squabble over international markets.

Utopia is the ancient Greek word meaning “no place” or “nowhere”, and so, as socialism presently does not exist, it is a Utopia on the world atlas, but it is readily available as soon as the preponderance of people on earth understand what it is, and choose to establish it. Socialism is not the incestuous child of anything. It is as yet unborn. We will not see the birth of this cherished child until development and enlightenment choose to consummate their compatibility.
I urge you to defeat this motion.
(The motion was lost)