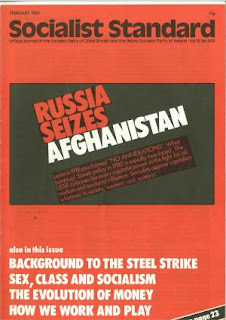 From the February 1980 issue of the Socialist Standard

A quite remarkable letter from a viewer was published in the Radio Times recently. A Mr. Howell wrote a crushing exposure of a series of three BBC television programmes on “The Right to Work”:

The first programme gave a glossy ‘To-morrow’s World’ treatment to the potential of the micro processors, with interviewers and presenters blissfully unaware of the contradictions. We heard how service industries would expand, and then saw computers taking the place of room service . . . We heard how leisure would become a big money- spinner, and next day found that those who have the leisure will be on the dole-or social security.
Let us turn from the fact that the planners of those programmes did not know any answers to the questions of the effects of the introduction of the new technology: and look at the final programme which showed that they did not even know the questions to be asked.

And what was the response of the BBC Horizon programme producer, Michael Blakstad, and editor of the “Right to Work” programme? A pathetic confession that they understand nothing about it:

I cannot but agree that we need to re-examine the real meaning of “work”. We took an enormous subject and we drew no conclusions.

In other words, Mr. Howell was right and they admit they don’t know what they are talking about. Perhaps the Socialist Standard can help.

Obviously the first job is to define “work”. What is here in question is not work as understood in physics, which is a straight, simple mathematical relation. “Work” in sociology is rather more complex. Here we are dealing not with inanimate objects but the effort of human beings. This is our first fundamental distinction, for it is obvious that many animals work and as Fourier, the French Utopian, pointed out, obviously derive the greatest happiness and joy in doing so. Bees, ants, spiders and birds build hives, nests and webs, while beavers build dams and termites actually raise reinforced structures.

Here we are indebted, once again, to Karl Marx for pointing out the basic difference between the work of chimpanzees who have been induced to join sticks or build ladders to reach food, or rats to push coloured buttons, or even angle worms to thread a maze, and that of human beings. Harry Braverman, the American author, quotes from Marx (the very first page of Capital, volume I) in Labour and Monopoly Capital:

We pre-suppose Labour in a form that stamps it as exclusively human. A spider conducts operations that resemble those of a weaver, and a bee puts to shame many an architect in the construction of her cells. But what distinguishes the worst architect from the best of the bees is this: that the architect raises his structure in imagination before he erects it in reality. At the end of every labour process we get a result that already existed in the imagination of the labourer at the commencement . . . he realises a purpose of his own . . .  to which he subordinates his will.

This above all, is the distinguishing feature of human work; the result of conceptual thought, and a pronounced enlargement of that part of the brain (the parietal) possessed by no other animal, making humans independent of the animal’s captor—Instinct. It produces articulate speech which can communicate and transmit knowledge, making a general social culture inevitable. It is this ability to imagine—to create the subjective image—which characterises the greatest scientists and artists.

Man does not merge into the materials of his undertaking, but proceeds from the material to his mental picture, from his mind to his model.
Art, indeed, consists in the conception of the result to be produced, before its realisation in the material writes Aristotle.
Men, who made tools of a standard type, must have formed in their minds images of the ends to which they laboured. Human culture is the outcome of this capacity for human thought Professor Oakley, Skill As a Human Possession.

This gives us the key to the understanding of the basis of the organisation of the capitalist production system; the division of labour or the breaking down of a process into its simplest possible parts, thus depriving the work of its natural essence-its imagination, its creativity.

We have much studied, and perfected, of late, the great civilised invention of the division of labour, only we give it a false name. It is not the labour that is divided, but MEN, divided into mere segments, broken into small fragments and crumbs of life, so that all the little intelligence that is left of a man is not enough to make a pin, but exhausts itself in making the point of a pin. The Stones of Venice.

The division of labour has always existed (for instance, in child-bearing) but its application to the capitalist system

is the breakdown of the processes involved in the making of the product into manifold operations performed by different workers.

Braverman, p. 73.
Labour power has become a commodity. Its uses are no longer according to the needs of that who sells it—but of employers seeking to expand their capital. The most common mode of cheapening labour-power . . .  is to break it up into its simplest elements.

This explains the technology of capitalist society. In the words of Frederick Taylor the inventor of American “Scientific Management”

All possible brainwork should be removed from the shop and centred in the planning—or lay-out department.

Work “as an activity that alters natural materials to improve their usefulness” is transformed by capitalism into hated toil, converting the toilers into robot automatons repeating the simplest mechanical operations thousands of times. It is this which has induced some writers to predict a future where 15 per cent will be the all-powerful technicians with the ‘know-how’, 15 per cent managers who understand the general process, and 35 per cent general unskilled labourers, button-pushers and key-punchers, leaving 35 per cent of the workforce permanently unemployed, because redundant.

Each form of society produces the technology it requires. In capitalist society every machine, each process, which reduces the necessity for initiative or creativity, is welcomed, every elimination of personality introduced. The reason that the “experts” invited by the BBC proved utterly incapable of defining the nature of the problem is because they do not understand capitalism.

There is no solution but the abolition of capitalist technology itself. Knowing the main incentive for the fragmentation of the labour process under capitalism, enables us to extrapolate the nature of work in socialist society. The general guiding principles will obviously be the integration and synthesis of the mental (imaginative or planning) side with the actual operation, by the same people. Once again we turn to the creative artist for a description of labour in a socialist society:

In Socialist society all unintellectual labour, all monotonous dull labour, all labour that deals with unpleasant things and involves dreadful conditions will be done by machinery; and just as trees grow while the countryman is asleep, so while humanity is enjoying itself in cultured leisure, machinery will be doing the necessary and unpleasant work.

The Soul of Man under Socialism, Oscar Wilde.

In socialism work will become the ultimate form of art.

For the worker, the craft satisfaction that arises from conscious and purposeful mastery of the labour process, will be combined with the marvels of science and the ingenuity of engineering. An age in which every one will be able to benefit from this combination.”

The exchange of living labour for objectivised labour is the ultimate development of the value relation and of production resting on Value. But to the degree that large industry develops; the creation of the real wealth comes to depend less on labour-time—whose effectiveness is out of all proportion to the direct labour-time spent in their production, but depends rather on the general state of science and the progress of technology . . .  Labour no longer appears so much to be included within the production process, rather the human being comes to relate more as watchman and regulator to the production process itself.
No longer does the worker insert a modified natural thing as middle link between the object and himself . . .  he steps to the side of the productive process, instead of being its chief actor.
In this transformation it is the development of the social individual which appears as the great foundation stone of production and of wealth.
As soon as labour in the direct form has ceased to be the great well-spring of wealth, labour-time ceases to be its measure, and exchange-value ceases to be the measure of use- value.
Production based on exchange value breaks down. The free development of individualities, not the reduction of necessary labour time to create surplus labour, but the general reduction of the necessary labour of society to a minimum, which then corresponds to the artistic scientific development of individuals in the time set free.
The measure of wealth is then NOT labour time, but disposable time.

Divison of labour under capitalism will be transformed into multiplication (repeated additions) in socialism. Humans will become scientific, technical creative artists of production and will make their historic leap “from Necessity into Freedom”.
Horatio
Posted by Imposs1904 at 7:31 PM

I'm guessing the letter writer to the Radio Times - Mr. Howell - was John Howell, an active member of the Guildford Branch of the SPGB at the time of the publication of this issue of the Socialist Standard.

With this article posted on the net, that's all of the February 1980 issue of the Socialist Standard online . . . with the exception of the Party directory and the 50 Years Ago column.