Letter: The Labour Party and Ourselves (1973) 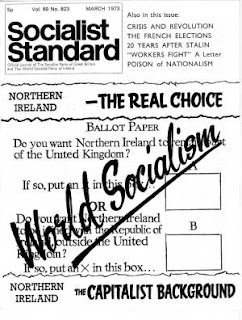 I read your literature with great interest, but found a number of points difficult to accept.

For one, the object of the Socialist Party of Great Britain is stated to be: “The establishment of a system of society based on the common ownership and democratic control of the means and instruments for producing and distributing wealth by and in the interest of the whole community”. I expect you are fully aware that Clause IV No. 4 of the constitution of the Labour Party states: “To secure for the workers by hand or brain the full fruits of their industry and the most equitable distribution thereof that may be possible, upon the basis of the common ownership of the means of production, distribution and exchange, and the best obtainable system of popular administration and control of each industry or service”.

The aims of the SP and LP are therefore identical. As the SP stands for a peaceful introduction of Socialism I can only assume that to mean through popular parliamentary control. Not only the aims but the methods are the same.

No doubt you denounce the LP as traitors to the socialism they are supposed to represent. My own view is that the divided nature of the British leftwing makes it impossible for a meaningful socialist alternative to arise. At the moment the Labour Party offers the only real alternative to Tory rule. Groups such as your own, together with the Maoists and other minority leftwing groups, merely remove or diminish the power of the LP resulting in ever-stronger Tory rule. The right wing in this country is strong, rich and above all united which is why they rule this country now.

Heath and Wilson suffer similar ailments. Wilson is frightened of appearing too extreme and inviting the wrath of the Tory-controlled mass media. Heath is forced to bring in prices and incomes policies, devalue the pound, give massive government aid to nationalised industries. Things he vowed never to do. The hacks in the press of course played down Heath’s manoeuvres, and the left is too divided to move in for the kill.

The British left has now the combined might of European capitalism to fight and any divisiveness will only lead to the British working man, together with his European comrades, being lost in a sea of negative taxes, supplementary grants, inflated family allowances, instead of being allowed to earn a living wage.

Although people like Robens, late of NCB, considerably shake the credibility of our elected socialist leaders I feel it better to remain loyal to the Labour Party.
A. Fraser,
Poole,
Dorset.


Reply:
The object of The Socialist Party of Great Britain and the object of the Labour Party (which is only a paper commitment anyway) are by no means "identical". Mr. Fraser has missed the significance of the word “exchange” in Clause Four. We stand for a society in which exchange, i.e. the buying and selling of goods and services and all that goes with it, will have no place. Instead, every member of society will have free access to goods and services according to need. (And, we might add, far from people getting a ‘‘living wage” the whole wages system and labour market would disappear).

‘‘The means . . .  of exchange” the Labour Party constitution speaks of have always been interpreted to mean financial institutions such as the banks and insurance companies. Clause Four, in other words, refers not to a moneyless Socialist society but to a State-run exchange economy or State capitalism. The Maoists and the other groups Mr. Fraser criticises us for not uniting with also stand for State capitalism. Why should we unite with them any more than the Tories and Liberals which stand for private capitalism? We are opposed to capitalism in all its forms and only stand for Socialism.