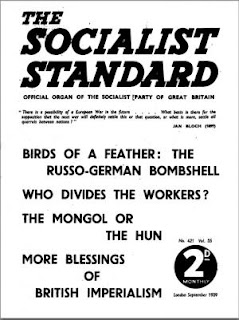 In a recent debate with the Labour Party, one of the points raised was, that we divide the workers by separate parties. From this the workers are led to assume that the Labour Party unites them. Now, before anything can be divided it must first have been united. When making this charge Labour men conveniently forget to mention on what the workers as a class are united. Socialists know that the working-class has one common interest around which it can be united—its status as a wage-earning propertyless class. In order to unite the workers on their class basis, it is obvious that only one thing can be taught them—the abolition of class ownership, which keeps them a wage-slave class. Thus, a party teaching this is teaching that which will unite the workers as a class. This the Socialist Party does. How about the Labour Party and its teaching? The propaganda of the Labour Party is not one of unity, it is not even united about what reforms it shall advocate. Not only does the Labour Party obscure the class struggle by its reformism, but it advocates contradictory measures at the same time. In order to obtain votes anyhow, the Labour candidates advocate anything and play upon the ignorance and petty prejudices of the workers, and in this way prevent unity of outlook.

Let us consider how it works out.

One of the most heated controversies of recent times was the much-boosted “popular front.” Was the Labour Party united on this? In my own city we had prominent Labour Councillors speaking to working-class audiences both for and against this Moscow manoeuvre, and then asking the workers to vote for them. Some years ago Mr. John Scurr introduced into Parliament the “Catholic Education Bill.” In one of our constituencies (mainly Catholic) the Labour member declined to support the measure and a Labour Councillor then resigned from the Labour Party—as a Catholic. During the election of 1929 the writer was busy in a Northern constituency, and the Labour candidate proudly proclaimed: “I am the only Free Trader ”; at the same time the Labour candidate for a cotton area was advocating a measure of “protection.” Such double-crossing was made possible because of the distance dividing the two regions. Were these two men to speak in the same area, the game would be up. When the Government launched a shipbuilding programme the Labour members on the Clyde and the Tyne fell over each other in their competition to show why the orders should be placed in their shipyards, because each M.P. was considering his own votes. In the war of 1914-18 the Labour Party advocated policies ranging from the stunt Jingo war support of the Tillett-Clynes group to pacifism of the Lansbury end. To-day, on Conscription, National Service and other aspects of Capitalism, you cannot obtain a single pronouncement endorsed by the whole Party. Their speakers get away with it by announcing beforehand that they only express their own views, in spite of the fact that they speak on their Party platform. When attending Labour Party lectures our local comrades never fail to ask: ” Is the Labour Party a Socialist Party?” and we never get the same answer. We then point out the lack of unity in the speakers’ reply, shattering the workers’ belief in the Labour Party’s claim to be out for unity.

This pose of unity by the Labour Party has got to be exposed, and they must be shown up as “dividers” of the working class, not ”uniters.” Unity can only come about when the workers agree on a common aim; before they can do that they must understand their common interest. That party which teaches Socialism is, therefore, the uniter of the workers. The Labour Party does not teach Socialism, but hinders those who do by teaching a multitude of reforms. The answer to the question, then, as to who divides the workers is—the Labour Party.
Lew Jones
Posted by Imposs1904 at 4:54 PM