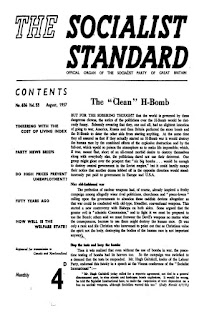 From the August 1957 issue of the Socialist Standard

Is Britain great? And why are so many workers considering emigration as something of a solution to their problems?

Firstly, British capitalism, although still a world power, is second rate in comparison with the giants of the United States and the Soviet Union, which is nothing, as far as workers are concerned, to get hot under the collar about. The once mighty British Empire bestowed no benefit on British workers; likewise American and Russian “greatness” on their workers.

As for the increasing flow of emigrants to the New World and Australasia, again the reasons are hardly secret—the chance of higher wages, a supposed solution to housing difficulties, etc.—all very much facets of working- class life.

However, Mr. Harold Hutchinson, of the Daily Herald (4/5/6 March), in a series of three articles, goes in for some soul searching on these very questions. Not surprisingly, being a reformist. Socialism is not mentioned, let alone defined; Mr. Hutchinson’s horizon does not go beyond capitalism—although he no doubt prefers a “modified” capitalism—with all of its inseparable paraphernalia, i.e., buying and selling, rent, interest and profit, export drives, together with the necessary trade routes, spheres of influence and strategic points. Presumably, this is considered perfectly natural, his task being the futile attempt to knock off some of the rough edges.

The Greatness of Britain
In his first article, Mr. Hutchinson makes great play of British industrial and commercial resources and contributions to technological progress. He instances British lead in atomic power, the fact that the chemical industry is the largest in Europe, the British rôle in quality motor car production, aviation, shipbuilding, etc., and that London is still the world’s commercial centre. All very interesting and, no doubt, factual, but although the working class make all this possible, they neither own nor control these wondrous means of production and distribution—any more than did the chattel slaves of Ancient Rome own the vast resources of the Roman Empire.

The workers who do not own Great Britain
As Mr. Hutchinson well knows, the only way workers can scratch a livelihood, here and elsewhere, is by the sale of their labour power. Divorced, through personal or social circumstances from their pay packet, they are, in most cases, immediately dependent on sick clubs, etc., or on meagre State aid, the British atomic lead notwithstanding.

Most workers do not even own their "houses,” which is why there is widespread concern over the Tory Rent Bill. Those who do affect to “home ownership” have a working-life long mortgage around their necks.

Let an old age pensioner or disabled ex-Serviceman declare to the Assistance Board that he is a part owner of the British Empire, and see how far he gets!

Welfare Capitalism
In his second article, Harold Hutchinson admits that in spite of British capitalism’s so-called Welfare State the social system is virtually unchanged, which does not say much for the Party that he supports—the Labour Party.

He contends that present day society—he does not call it capitalism, of course—is based upon the education system, and survives as a result of it. The reason for this conclusion is not stated. Capitalism is based upon the class ownership of the very means of life, upon the economic fact that about 10 per cent. of the population own the factories, mines, mills, transport, etc., nationalisation notwithstanding.

It is obvious that workers are conditioned during their formative school years to accept the status quo, but this cannot be attributed to any peculiarities of the British education system as such; working class support for capitalism is not confined to those lands with Etons And Harrows, or those with monarchies and remnants of the landed aristocracy.

The Rôle of Education
Again, the factors making for this acceptance of the system that exploits them, are not confined to “education.” The mass means of communication which the ruling class has at its disposal is of paramount importance, not least of all the Daily Herald. (Quite apart from the presentation of “news” the constant circulation-boosting prize competitions which that and other papers engage in foster the idea that property owning is natural and desirable. It also at once clearly demonstrates the essential poverty of the working class.)

It is utterly useless to look for changes in the school system as a means of undermining capitalism, because although the blatant privileges of the so-called public school system may eventually give way to an apparently more democratic one, by and large this would be dictated by the needs of an increasingly technical (and competitive) economy. In no circumstances would the powers that be permit a curriculum that was not in keeping with their class interests. The overhaul of their education system is at the moment somewhat of a headache to them, trying as they are to maintain their hold on colonial possessions, finance, a large armament programme, and at, the same time pay for technical education.

Socialist education—that is an examination, understanding and resultant rejection of capitalism and the realisation of the need for a revolutionary change in society—is quite another thing. However, that is not what the Herald man had in mind.

America the model
Mr. Hutchinson then moves from education to economic affairs and bemoans the lack of real competition in this country owing to the emergence of cartels and price rings. He looks with somewhat envious eyes at—as he says—the “ really competitive system in the United States ” (where General Motors control about 60 per cent of motor car production and anybody can set themselves up in business producing cars, because, after all, there are no price rings to impede you—cos they’re illegal.)
The efficiency of production in America is lauded, not called exploitation, of course, and with it the fact that American workers have more gadgets around them than the workers of other lands; to Mr. Hutchinson this is known as the world’s highest standard of living. It would probably spoil the picture to mention that the workers across the Atlantic suffer the highest rate of exploitation, that American capitalism gives rise to the world’s highest crime rate, and that the stresses and strains of the “American way of life ” produce a phenomenal divorce rate and neurotic problems.

Perhaps Mr. Hutchinson would regard these as separate entities, completely unrelated to propertied class society.

Incidentally, the Herald itself, in an article several months ago, pin-pointed the “tranquilizer” drug craze in the United States, and to a more limited extent its advent in Britain, but that is past news now. Anyway, one of Mr. Hutchinson’s colleagues wrote it

No matter where you live
Fellow workers, capitalism is world-embracing. Whether you choose to stay in this country or to emigrate, basically your position will remain unchanged, exploited in order that others may live in idle, parasitic comfort continually threatened with economic crises and war, directly resulting from the competitive system which is held in such esteem by capitalism's apologists.

Therefore whether you remain in Britain or decide to “make a go of it” across the seas (or, maybe, you are an immigrant to this country) how about giving a much-needed hand for Socialism, with a view to embarking upon the greatest adventure of all time, the fashioning of the world anew. This will mean the end of the profit motive, to be replaced by production solely for use, arising from the common ownership and democratic control of the earth's bounteous natural and industrial resources. Not competition but co-operation. We will then cease to be wage slaves, mere hired (or fired) hands, but free and equal human beings.

On a basis of Socialist understanding, this world is within our teach. What are we waiting for?
Frank Simkins