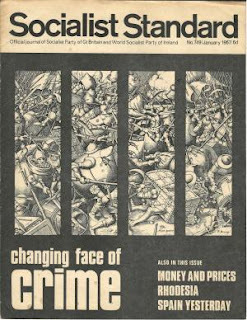 From the January 1967 issue of the Socialist Standard

Spain once had a great empire but was left behind when the industrialisation of Europe began. The question thus arises: Why was Spain retarded? The answer given by Kautsky and others—which seems plausible enough—was that it was precisely because Spain once had a great empire. For with the constant flow of gold and silver into Spain from Mexico and Peru there was little incentive to develop industry and commerce. When, with the independence of the Latin American colonies in the first part of the 19th century, this source of wealth dried up Spain was left without much standing in a rapidly industrialising world. This retarded position showed itself in dynastic struggles and in the struggle of the bourgeoisie, in the form of Republicanism, to sweep away the relics of the past. But the Spanish bourgeoisie never had the zest or unity to make the necessary thorough structural changes.

At the turn of this century there was a wave of economic development in Spain and Spain was not involved in the first World War—which helped. However Spain was still left with the relics of an empire in North Africa. National servicemen were sent to Spanish Morocco to quell the Arab uprisings. There was not much of economic value in Spanish Morocco but the military establishment wished to have an empire to strut about in. Largely as a result of the unrest about conscription for this war the Monarchy fell in 1931. But because a Republic was set up is no reason to think that there was a widespread belief in political democracy. Not only were there the open opponents of democracy in Spain but there was also a strong anarchist movement which we can say was of disastrous significance for democracy. For the anarchists helped to spread among the working class the idea that democracy was a mere “facade” and they encouraged abstention from politics.

The Republic, set up to pave the way for modern capitalism, made mistakes from its own point of view. First and foremost it antagonised Catholic opinion. They should have known that you don’t get rid of religion by banning or ignoring it. By alienating almost the entire Church the Republic unnecessarily weakened itself for, as Gerald Brenan points out in his The Spanish Labyrinth, there was, for specific reasons in Spanish history, considerable scope for Catholics to have looked favourably upon the land-reform and agricultural development that were essential to capitalist development in the peninsular. The Republic also weakened itself by neglecting education, a necessary factor for further economic and social development. It seemed more concerned to close Catholic schools than to open new lay ones.

The deep divisions on the Republican side when war came are well known through the writings of people like George Orwell. But the other side was an odd alliance too. The Carlists, backward-looking believers in theocracy associated with a branch of the Bourbons, were unlikely associates of the Army, the orthodox Monarchists or the Falangists (or Fascists). This is one of the splits in the régime coming to the surface today.

The old forces, backed by Germany and Italy, won. They defeated in war those who wished to clear the way for capitalism. Ironically, however, this task fell to them. Since the war, economic development primed by American aid helped immensely by tourism, has gone on apace. This has led to considerable growth in the working class (including the so-called middle class) at the expense of the peasantry. The working class is making its presence felt through strikes though at one time illegal. As a result some types of strike have now been made legal by the proposed new Constitution.

The Spanish industrial élite has also been pressing for reforms. It has felt the need for a greater degree of discussion of policy and procedures. These capitalists, working to a large extent through the organisation known as Opus Dei, have been a “liberalising” element in the Franco regime.

The changes that have taken place are very limited but are still real. Granted under pressure mainly from the working class, they are hopeful as they provide increasing scope for dissent and discussion.
Eddie Grant
Posted by Imposs1904 at 5:21 PM