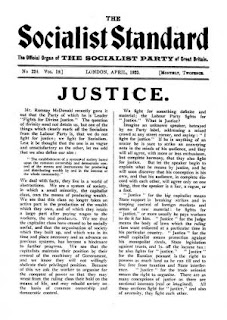 From the April 1923 issue of the Socialist Standard

The advent into Parliament of a larger number of Labour members than hitherto is causing the working class adherents of the Labour Party to feel highly elated.

To keep the pot at boiling point the “Daily Herald” is daily publishing portraits and histories of these “white hopes." The mixture of aims and aspirations and the national programme are somewhat at variance, but this fact apparently escapes the notice of the adherents.

Some are Trade Union officials, pinning their faith on “industrial action"; others believe in government of the ignorant many by the intellectual few; while quite a lot are Christians !

To the latter “recommendation" the “D.H." expresses deep satisfaction. The only reasonable conclusion is that the greater the addition to their ranks the more complicated will the problems confronting the working class become, the more confused will be their minds, and the more satisfied and appreciative will be the ruling class.

To quote but one example of the democratic instincts of the “oil and water mixers."

On the fifteenth of February last five officials of Civil Service unions, two of them Labour. M.P.’s, dined at the Connaught Rooms with the Duke of York, several foreign ambassadors, some admirals, baronets, knights, the Prime Minister, and other well-wishers of the working class.

They represented the Civil Service. How "civil” that service must be to agree to its hired parliamentary champions acting in such a way is not a mental problem.

No doubt they will receive the usual vociferous applause whenever they find it convenient to address a gathering of their “Unions.” Possibly things of this description happen more frequently than is generally known.

Without doubt the Parliamentary Labour Party is an integral part of the capitalist machine, a part in which it promises to become very efficient; by using identical methods and making innumerable “promises” great adaptability is shown.

The principal question confronting them at the moment is “unemployment,” and all sorts of schemes are being considered, none of which, however, touch even the fringe of the question.

The unemployed just now are being regaled with a species of “soft soap” called “trade revival,” and moreover it is being issued by the Labour Party.

There is a refusal to come to grips with facts, and the chief fact is that “unemployment is a necessity to capitalism.” ‘With the development of the system there is a steadily increasing industrial reserve, which makes the competition for jobs keener and cheapens labour power. If the problem was capable of solution under the existing system labour leaders and T.U. officials would have to change their jobs! One factor is the introduction of more and more labour-saving machinery, calling for less human energy, which in general means increase in unemployment.

The logical conclusion is that as unemployment is necessary to the social order, and that social order is desired by the working class, the attendant but necessary evils of the order are also desired. And the evils are many, though one individual may not come in contact with them all. Poverty in the midst of plenty, vile slums and sumptuous palaces, wooden clogs and dainty shoes, shoddy clothes and warm wool—these, the extremes of but a few of those evils which you, fellow worker, appear to desire.

You do desire them, you vote for them at every election; possibly you will continue to vote for them unless you start seriously to examine.

To do this, have done with all bodies that are only diverting your energies and intelligence to enable them to grind their own particular axes. Forget Tutankhamen’s tomb, the royal baby, and all such things. Concentrate your mind on the future of your own children; their very existence is in jeopardy, and it’s your indifference they will blame.

Perfect the organisation of your class, the Socialist Party, whose object is the ending for all time of systems of society that allow the minority to possess the world’s wealth.

It is a job for the understanding majority. You are of the majority. Get politically intelligent. Your master is; so, if you wish, can you be.
Griff.
Posted by Imposs1904 at 11:06 PM