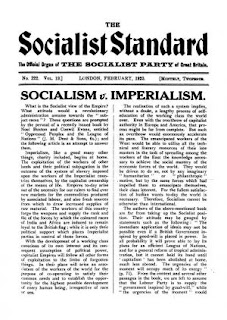 From the February 1923 issue of the Socialist Standard

A cynic has said that “ the height of absurdity is a man running to work, before daylight, laughing.”

The worker, having by his capitalist schooling and training been taught to believe it his inalienable privilege, his birthright, and heritage, any attempt to dislodge his long-cherished affection for toil, meets with disapproval and a few empty phrases. Tell him that work to-day is mentally, morally, and physically degrading and he will look contemptuously upon you. His mental antidote for such taunts is the one so popular anywhere but at the seat of operations, “ Work, boys, work, and be contented.” Point out the absurdity of a system that "rewards” a life of toil with that capitalist dust-bin, the workhouse, and though in all probability he glimpses the truth, through force of habit he reverts to the generally accepted axiom, “Somebody’s got to do it.” How true! But who’s the "somebody” always? Carlyle’s reference to the percentage of foolish people in this country seems perilously near the truth, when we reflect that it is the wealth producers (the working class) who suffer want and insecurity, whilst the loafers, i.e., the landlords, the shareholders, the profit-takers (the capitalist class) possess the bulk of the wealth and consequent security. What a laugh! what irony! were it not for the resulting tragedy of it all. “Ah ! but,” says our work enthusiast, “the master works with his brain.” We might appropriately reply, so does the forger, the burglar, and the bogus company promoter, but not producing and distributing wealth. Ascot, Goodwood, the Riviera, and such rendezvous keep our masters busy in their turn, and whether the season dictates that they shall stay in town or not, the workers will still be found in the factory, mill, mine, or office.

Neither the absence nor the death of any capitalist hinders the production of wealth. What do the capitalists do toward the designing and building of a ship, or the writing and printing of their own Press? Nay! even the making of the money with which they pay the workers? Nothing. Whatever the tasks or services, they are purchased by the masters to be exercised for their profit in that particular capacity. When a disaster or a shady deal brings the idlers to prominence, they themselves reveal this fact by admitting ignorance of the whole business. Do you think, fellow-worker, that if work were an enviable task, that you would have the complete monopoly of it? Hardly! The nice things, the luxuries, the best in food, raiment, and accommodation, are not for you—yet. For you the offal, the adulterated scraps, the shoddy uncomely clothing, the sunless sombre cities, and often an untimely end. What of your masters? Ah! the rolling sea, the blazing sun-bathed terraces of Monte Carlo, the country house, an endless round of pleasure provided in its entirety by you. Come! awaken from your slumbers, realise your manhood and womanhood, and organise for a life worthy of such. Work, in the truest sense, will then become a pleasure, pursued as a means to an end, the life glorious. Today, because you are separated from the means of life, you are slaves to those that own these things. Work becomes toil, because it is to you an end in itself, instead of being, as we would have you make it, merely a means to our ultimate objective, happiness and plenty for all. Capitalism has solved the problem of wealth production. Socialism will organise life, and by using every means science has placed at our disposal to produce wealth for use, reduce work to the minimum. Man’s requirements are microscopic compared with our powers to dominate the earth and its fulness.

Once you understand our position—and it is quite easy to do so—you will no longer demand toil and maintenance, a worthless objective, but you will organise to take “the World for the Workers.”