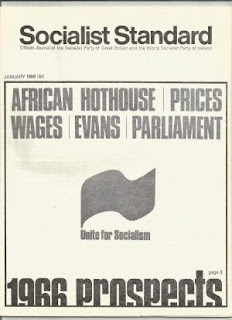 Humbugtime is over for another twelve months, thank goodness. It ended at around midnight on New Year’s Eve when everyone slapped everyone else on the back, wished him health, wealth and happiness, and then got back to the serious business of cutting the next man’s throat.

But what am I saying! Humbugtime is not over. Only a particularly cynical and obnoxious part of it called Christmas. Now will come the January “bargain” sales when well bred young ladies will scratch each other’s eyes out, and the retailers will release specially made stocks of rubbish under the heading of “genuine reductions”. About the only thing that is genuinely reduced is the quality of the goods.

By the time you read this, you might also have noticed the adverts creeping into the paper about this year's summer holidays. In fact I got a circular through the post at the beginning of December. All of them will promise you the best and cheapest of holidays (another piece of humbug—the two just don’t go together) and running through all of the literature will be the suggestion that the holiday firms are here with the intention of serving you purely for its own sake. But just try defaulting on payments, say, on a “hire purchase” holiday and watch them drop the mask of genial hand-rubbing servility.

So far we have looked at two or three examples of humbug that you will encounter in about the first six months of this or any other year. But there are others and no doubt you can add to the list, and make it as long as your arm. In this year of 1966, for example, you will again be told to work harder and produce more, but not to press for more wages. If only you will do this somehow (no one ever explains just how) your standard of living will rise. This will be the government’s bleat—ably supported by opposition and press alike, and they will pound your ears with this lie until they ring. But what will happen in practice? The trade unions will continue to struggle for better pay and conditions, just as they have always done.

The government will assure you, as ever, that it is working for peace while developing all sorts of deadly weapons and selling them abroad. The armed forces will be used—as they have always been—to bolster British capitalism’s interests and if that means bloodshed, then so be it. Of course, the British government is not alone in that particularly bloody type of humbug. Only a few months ago in this column I gave examples of some particularly peace-loving warmongers, but they were mainly small fry in the capitalist scheme of things. Such as Tito and Nkrumah.

For a really nice large chunk of humbug, President Johnson’s words of December 2nd take a bit of beating.

Talking about the Vietnam war to a conference of industrialists and financiers at Washington, he insisted that :


“This nation is ready to talk, unconditionally, anywhere with peace as our agenda . . .  peace is our commitment. Peace is our goal. Peace will be the only victory we seek. And peace will come.” (Guardian—3.12.65.)

The Vietnam affair is one of the bloodiest “minor” wars which have been fought since Korea. It has been protracted and gruesome, with some really spine-chilling atrocities on both sides. And as everyone has talked more and more about “peace” so the killing has intensified—“escalated” is the word in current vogue, I believe.

But peace, however desirable, is something which must be subordinated to the interests of the various contestants and in leaving that out of his speech, the President was guilty of the biggest humbug of all. No talks will ever be "unconditional”. They will be held sooner or later because neither side can fight for ever, and you may rest assured that both sides will then drive as hard a bargain as they can to try and protect their interests.

One of the many hallmarks of working class existence in the 1930’s was poor nutrition. Marghanita Laski recalls this briefly in an article in the Observer colour supplement of December 5th. when she cites a 1938 study of Birmingham schoolchildren which “classified only 2.5 per cent as excellently nourished.”

There have been some changes since then, of course, but I never thought I’d see the day when it would be suggested that “the wealthy executive lunching on oysters, steak and brandy may not be as well fed as the workman with his humble stew”. Yet this is what Dr. J. G. Davis (past chairman of the Society of Chemical Industries Food Group) has said, and it was reported in The Daily Telegraph of November 18th last. Now I do not want to take the doctor’s words out of their context or misconstrue what he has said. He was, of course, pointing to the possible nutritional deficiencies in a business lunch compared to the workman’s dinner and taking the examples he gave, there is something to be said for his point of view. But does that mean that we should shed any tears for the poor under-nourished capitalist? Far from it.

The fact that a man may have the financial means to buy himself good food—the best from every point of view—but is perhaps foolish enough not to do it, is really beside the point. He is in the position to feed himself well and having ignored the doctor's advice, he can still get the best of medical attention. In other words, the richer he is, the better chance he stands of feeding, clothing and housing himself really well. And as a general rule, this is just what happens of course.

The proof of the pudding is in the eating. I haven’t noticed any capitalist making strenuous efforts to give up his riches and savour the qualities of working class food, clothing and shelter. It has been estimated that over one third of the world’s population are starving. I wonder how many of them are rich people.

Gaspers
“If they (the opposition) are not pleased about it, the country outside is, and nobody more than the business community.” (George Brown in a Commons speech 17/11/65, on the improved balance of payments position.)

“The only thing which bars one from going to a public school is lack of money”. (Lord Somers, House of Lords debate 16/11/65.)

“India might have to reconsider its position if China ever accumulated a stockpile of nuclear weapons and perfected a delivery system.” (Mr. Shastri—16/11 /65.)
"All in all, then Mr. Wilson and his Economics Ministers cannot take it for granted that things will move along predictable lines." (Guardian financial editor W. Davies—18/11/65.)

“By raising living standards you create demand for our goods, order books would be filled to overflowing . . .’’ (“War on Want" appeals advert in The Observer—14/11/65.)

“It is greed for financial profit and the enormous pressure of conflicting interests that are mainly responsible for this brutal destruction. (National Trust Secretary J. F. W. Rathbone, on the destruction of the English coastline—1/12/65.)

“A happy Christmas and a prosperous new year from Editor and Staff of your paper. (Pensioners’ Voice for December 1965.)
Eddie Critchfield
Posted by Imposs1904 at 8:05 AM