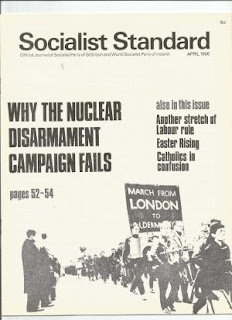 Just to remind You

I know it's not quite the done thing to say "We told you so", but it’s true nevertheless. We did tell you so—in the November 1964 issue of this journal. Hard on the heels of the Labour Party’s victory, here is what we said in our editorial of that month:—


Under the new Labour Government, then, it will be very much business as usual for the ruling class-and for the man in the street as well. Workers will still have to struggle to make both ends meet amidst the increasing strains of a competitive world . . .  and when they come out on strike, they will be opposed just as much by Wilson as they have been by Home.

I don’t think I can fault that paragraph, except perhaps to say that it was a little too kind to the Labour government. Indeed you have had to struggle; indeed the strains have increased; but when it came to the question of strikes your Labour friends bashed you a darned sight harder that Home or MacMillan managed to do. In fact, it could be argued, that the Tories tended to avoid head-on clashes with the unions and sometimes backed down in the face of wage demands. It was they who set up the Guillebaud Committee on the railmen’s pay, but it was the Labour government (through its incomes board with a £15,000 p.a. chairman) who threw out Guillebaud.

The ‘‘early warning” Bill, published just before the election this year, makes advance notification of wage claims compulsory. Could any employer ask for more? If the bill goes through, he will be in a grand position to prepare for strikes and gird his loins for battle. And the bitter irony of it all for some of the more militant trade unionists is that the Minister responsible for the proposals— George Brown—used to be an active official in the Transport and General Workers’ Union.

Some Labourites, like Mr. Warbey, onetime Member for Ashfield, have become sadly disillusioned, sometimes after many years in the Labour cause. Isn't it a pity that they did not heed our "early warning system”. They could have saved themselves a lot of trouble over the years. Yes, we have had an “early warning system’’ since the day of our birth in 1904. It is our sound analysis of social conditions which has enabled us to say to reformist organisations like the Labour Party, well in advance, "You will fail”. Over forty years later the Attlee government, with a thumping majority, did just that. Its successors will do the same.

Who first said that about dogs? My schoolteacher from junior days used to repeat it often enough, but pearls of wisdom fell rarely from her mouth and I doubt if she knew the origin. Well whoever said it, its current validity has to be measured in the context of modern conditions, and when this is done, perhaps there is room for doubt.

A comrade has sent me a cutting from The Guardian editorial of February 4th, which seems to illustrate the point. It tells us that the government pays £1,070 a year to maintain each of the 1,857 Alsatians used for guarding military establishments. Quite a sum, you might think—certainly more than many workers manage to earn in a comparable period, but no government will stop to look at it from that point of view, of course. To them it is a vital job that military airfields, H-Bomb factories, and other objectionable installations are carefully guarded night and day, so any method will be pressed into service.

Notwithstanding the figures given above, an Alsatian would be cheaper to keep than its equivalent in manpower and has the additional advantages of fleet-footedness and a good high jump. It can be trained to bring down an "intruder” with a leap, and hold him down until the guards arrive. An ideal guardian of private property, and used widely for this purpose in the modern world. Alsatians are employed a great deal, but there are other breeds—big, beautiful courageous beasts—trained to fight at the word of command.

The civil police also use them and coincidentally enough an article on this appeared in my local paper on March 4th. It was rather a pathetic effort to eulogise one particular police dog and tell how it was helped its handler to make more than a hundred arrests in about four years. “Here”, bleats the corn writer, of a type so often encountered in local newspapers, “is a man hurrying along with a large bag . . .  are two lads wheeling a motor cycle along the road . . .  a shop with light showing under the door . . . ” He tries to show what a grand job is done by the bobby and dog in “the fight against crime”.

And many workers, too, keep dogs in the fond (but oft mistaken) belief that they will make good “watchdogs”; ignoring for the moment the fact that what most workers possess isn’t worth watch ing anyway, this is quite different from the highly trained beasts padding around Air Force camps or along town streets in dead of night in the charge of a police handler. And when all is said and done perhaps we shouldn’t be very surprised at the sort of use to which these animals are put. Horses have been used to move cavalry, mules to pull field guns; so why not dogs now to catch yobs and tear the pants off C.N.D.ers? It is just part of general misuse and perversion which capitalism fosters.

The R.S.P.C.A. will not concern itself overmuch, either. After all, why should it? The dogs are cared for well enough. It’s the human beings who suffer cruelty.


Housing for the People

The People is a Sunday paper struggling hard to attain the dizzy heights of champion dirt digger, a position currently held by the News of the World or the Sunday Mirror. But with a difference, the N.O.W. just fills its columns unashamedly with juicy reports of sex crime murders, court cases etc and lets your imagination do the rest. The People, on the other hand goes crusading in the national interest, and thereby concentrates its dirt digging in one direction at a time.

At the time of writing The People's voice is thundering against decadence and immorality, but a week or two before that it went raking round council estates (what a lousy job for someone) to disclose rich people living in subsidised houses. In the issue for February 13, for example, John Justice tells of a £100 a week film art director, a factory boss worth £30,000 and a £5,000 a year building constructor, all committing this grave offence.

Why do obviously well-off people occupy council dwellings? Perhaps they are eccentric—as only the rich can afford to be. Maybe there are other reasons but it would be futile to speculate about what they are. But there is another side to this question which perhaps has slipped your notice and which you should think about before you applaud The People its public spirited action. There is a back-handed slap across the face for you behind all its moral indignation. Just look at these random quotes:


Council property is for people who need it . . . “Our sons say we should not live here. One of them has a £10,000 house”. Your sons are right, Mr. Rose. And Dartford Council should help them to change your mind . . .  The sooner his council house is available for someone who really needs it the better . . . .

In other words, council dwellings are for those who cannot afford anything better. Cheap (and shoddy) houses for the workers—holes for proles. That is the real import of John Justice’s words, whether or not he realised it. In his frantic concern for this financial “apartheid”, he has given us a fitting demonstration of the smarting indignity of working class existence.

“The widespread use of an effective influenza vaccine would save the National Health Service a net £8 millions a year”. (Booklet by the Office of Health expenditure, 21.2.66).

"I am sure there will be objections from someone whatever we do. But as long as we get paid we will trade with anyone". (Sir Donald Stokes on Cuba's order for Leyland Coaches, 23.2.66).

“This is not an election about ‘more socialism’, whatever that may mean’’. (Guardian editorial, 1.3.66).

“Prices were marked up several shillings as an immediate response to the Labour Party's manifesto with its undertaking to renationalise steel on the basis of last year’s White Paper”. (Guardian Market report 9.3.66).
Eddie Critchfield
Posted by Imposs1904 at 5:03 AM