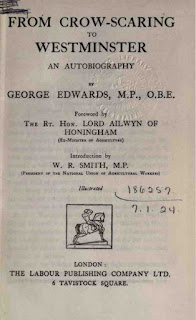 Book Review from the January 1923 issue of the Socialist Standard

When a man fights for the workers as hard and as long as George Edwards has, he earns the right to have his mistakes charitably judged. Even if he turns and denounces men of his own class because they fail to follow his lead, one can endeavour to understand the bitterness of his many disappointments and show him the sympathy he occasionally withholds from them. This autobiography offers material enough for an appreciation of what an individual can do, and what are his limitations.

Born into a poverty-stricken Norfolk home in 1850, George Edwards started work at the age of six, scaring crows seven days a week for 1s. He had practically no education, but appears to have been gifted with a natural independence of spirit, and coming at an early age into close touch with the virile Primitive Methodism of those days, he soon developed the will to resist and induce others to resist the "tyranny of the countryside.” His life is the record of struggles to organise the agricultural workers. Unrest was widespread in agricultural areas, and the demand for labour in the towns had set up a strong migration from the land. When, therefore, in 1872 Joseph Arch put himself at the head of a movement to organise farm workers, 150,000 men had joined various local bodies within six months. George Edwards became a member of one of these, and having learned from his wife how to read, and having gained confidence in preaching, he soon began to take an active part. As was natural, he studied the then advanced theories of Liberalism which seemed to him to contain the gospel of working class freedom.

After some exciting struggles, the continued drifting into the growing industrial centres of the North and emigration to the Colonies were reflected in a decline of interest in the agricultural unions. A partial revival accompanied the Liberal campaign for extension of the franchise in 1885, and Edwards then associated himself with Arch’s own union, and assisted Liberal candidates in Norfolk.

Then came a period of agricultural depression, which, with internal dissensions, led to the destruction of all but the Norfolk unions. Edwards meanwhile was diligently studying, together with many quaint theological works, the writings of Adam Smith, Thorold Rogers, and Henry George, and was learning that votes without the knowledge to use them effectively, merely made the workers “easy victims for the Tory Party.” He realised, however, the necessity for political action.

In 1889, at the request of some Norfolk labourers, he formed the “Federal Union,” while simultaneously other county unions sprang up in various parts of the country. Within a year they had 3,000 and Arch’s union 5,000 members in the Eastern Counties. Again depression in 1891 and 1892, and the inability to offer effective resistance to wage reductions, caused dissolution of the unions. In the latter year, too, George Edwards fought his first political battle for a seat on the county council, and lost by a few votes. He was opposed by one of the Liberals for whom he had worked so hard, and this taught him that "they were not prepared to assist the working men to take their share in the government of the country” (p. 61).

The organisations were continually in difficulties, but in 1894 the passing of the "District and Parish Councils” Act gave new hope of salvation in working-class representation on local councils, the latter having power to let out allotments and to appoint trustees for Parish Charities.

Some labourers were elected and much time and energy was devoted to enforcing the observance of existing laws. Their enthusiasm led, however, to defeat at the next election, and George Edwards lost hope of advancement in that direction. Continued depression and the formation of a rival union by political opponents had by 1896 caused the collapse of the “Federal Union,” its founder’s parting words being “ . . . my hopes have been blighted and now I despair of you. All hopes that you as a class will make any effort to lift yourselves from your downtrodden state have vanished ” (page 86).

His writings at this time showed a remarkable appreciation of the real facts of the worker’s enslavement; he saw that neither free trade nor protection, democracy nor autocracy, monarchy nor republic, made any material difference. His outspokenness no doubt explains the ferocity of the attacks made on him by political opponents, and it is interesting to note that the line of attack was the same as is being used now: the attack on alleged extravagant administration.

In spite, however, of the lesson he had learned, he remained in the Liberal Party and advocated their principles for the Free Trade Union.

In 1906 the Liberal victory at the polls was followed by a general attack by the farmers, and again a move was made towards organisation. Although 56 years of age and too dispirited to face the task willingly, George Edwards began the work once more in response to persuasion.

Except for increased centralisation the scheme was much like the previous one, but it was realised now that more care would have to be shown if the organisation was to weather storms such as had proved disastrous to its predecessors. Slow but steady progress was made, and by 1909 ‘‘The Eastern Counties Agricultural Labourers’ and Smallholders' Union” had 3,000 members and was represented at the Trades Union Congress. Some reduction in hours had been gained and the Saturday half-holiday was already becoming a possibility. Great enthusiasm resulted from a victorious six months’ strike in Norfolk, through which 1s. per week was obtained.

Much ground appeared to have been lost by a long and disastrous strike in 1910, but actual progress was fairly uniform up to 1913, when successes in Lancashire rapidly opened up new ground. The harm that was done arose mainly out of the personal differences and autocratic methods of some of the leaders.

Then came the war, and, as George Edwards says, “I, like most of the Labour leaders, felt it my duty to do what I could to help the nation in the hours of need, etc., etc.” This man, who had struggled for his whole lifetime to obtain for the workers the right to an existence slightly better than that of the animals, was afraid "that it would be the poor that would be the first to suffer should we be defeated, or should the enemy succeed in starving us. . . .” (pp. 190). As George Edwards knew well enough, the workers never had to look so far abroad as Germany for those who would starve them. The farmers are doing their best to starve them now, in spite of Edwards' pathetic belief that there is a "better spirit” in industry. He supported the war, although for him “war” is a crime of the deepest dye against humanity,” and on numerous occasions we find this curious knack of reconciling most antagonistic facts and principles. Before he would engage in industrial strife he sought biblical authority; he describes his father as a saintly man "who taught me the first principles of righteousness” (pp. 21), and on the same page records the fact that he “night by night, took a few turnips from his master’s field!”

In spite of the brutal fact that the agricultural worker is now back almost where he was in 1914, George Edwards talks about “the wonderful change” and finds more comfort than I can in the fact that the farm labourer is “now qualified to be even a Justice of the Peace.” He writes about the benefit of “collective bargaining,” but he should know well enough that the Conciliation Committees set up since the abolition of the Agricultural Wages Board in 1921 have been a farce as far as the workers are concerned.

When George Edwards wrote he had not j long been elected to the House of Commons, and felt a pardonable pride in the success he had attained after a life of strife and perpetual failure of one endeavour after another. What was more natural than that he should view the position of the agricultural workers somewhat too cheerfully? Even that has been taken from him in his failure to hold the seat at the recent general election.

The agricultural unions grew enormously in size during the war under the stimulus of labour shortage and rising prices, and later through the formation of the Agricultural Wages Board. It was unfortunately to a large extent a mushroom growth which withered away as soon as it lost its protective covering with the repeal of the Corn Production Act. To the extent that it was organised from above it was not permanent, and to the extent that its members lacked an intelligent grasp of the elements of trade unionism it failed to meet the shock of falling wages and unemployment. The idolising of leaders brought eventual apathy and disillusionment to all but the staunchest. Agricultural organisation is therefore not in a promising condition. Depression has caused loss of membership, as in other unions, but probably to a greater degree than in most. Well financed attacks on balance sheets have not been without effect, and the formation of a rival “non-party” union has added to the difficulties. There is, however, an explanation and a remedy for these things. It is in the recognition that the members alone can make or mar their organisation, and that in their understanding rests the only ultimate guarantee of success. No merits of leaders can form an adequate substitute. The man who is honest and dependable will reap disappointment as has George Edwards, and the man who lacks some of his singleness of purpose will soon enough fall to the temptation of getting security by entering the service of the enemies of the workers. In the absence of an instructed membership, what is much more dangerous than disloyalty .is the lack of knowledge. Neither the integrity of George Edwards nor mere sympathy and natural “fighting spirit” are proof against the subtle arguments of “community of interests” and the farmers’ “inability to pay.”

Men who clearly recognised the cause of the workers' poverty in the private ownership of the means of production, and who realised that the spreading of Socialist knowledge is the only permanent basis for working-class organisation would not have to go into battle with untrained troops, and would not risk finding themselves at the end of a life of ceaseless toil for their class, the disappointed leaders of a phantom army.
Edgar Hardcastle

Never heard of him...but we should have, shouldn't we?

I think Hardcastle was working for the Agricultural Union at the time he wrote this review.

I'd never heard of Edwards either, but there is a whole gallery of Labour/Trade Union leaders who have been consigned to the footnote of Labour Party history.

Did he really refer in the title of his book to the seat of parliament as "Westmonster"!