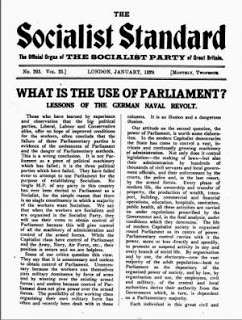 From the January 1929 issue of the Socialist Standard

The Workers’ Savings
In the early days of Capitalism it was possible for the man with small capital to set up in business with some chance of climbing to the top, and in consequence saving ranked high among the Capitalist virtues. Out of this developed the silly theory that the possession of wealth in the modern world denotes “abstinence" and “self-denial" on the part of the possessing class. It was effectively answered by the late Sir William Ashley, economic adviser to the Conservative Party. In his “Economic Organisation of England” (p. 157) he says :—

Phrases like these have occasioned no little mirth; it is hard to discover self-denial or parsimony as the world understands these words, in the processes by which modern capital is most largely accumulated.

Capitalist savings result mainly, not from self-denial, but from having incomes so large that it is difficult not to save. Knowing this, and overlooking the fact that the position of the workers is essentially different from their own, it is a common error for wealthy bankers and Cabinet Ministers to assume that the accumulation of funds in savings banks indicates prosperity among the workers. Every wage-earner appreciates only too well that the necessity of putting something by, out of wages already inadequate for decent comfort, is the result not of prosperity, but of the insecurity of his existence. It is therefore interesting to see that Major-General J. E. B. Seely, Chairman of the National Savings Committee, has realised this. In a speech at Leeds on December 12th he said that in November, 1928, more Savings Certificates had been sold than in any November since 1921.

As unemployment and distress grow, savings have increased. The reason is that the British people, when they are up against something, are determined to lay something up against the dangers looming ahead. Households now living on 30s. a week are saving more than they did when they were earning £7 or £8 a week. ("Daily Mail,” 13 December.)

And what a commentary on Capitalism. Here we have one of the wealthiest ruling classes known to history financing a huge national organisation in order to persuade its wage-slaves, starving on 30s. a week that they ought to save!

Statements of Fact.
There are, perhaps, different standards of accuracy and reliability observed by different Governments and newspapers, but during the War every Government and the Press of every belligerent country was engaged in faking and suppressing news, as well as in downright lying. In consequence, most people are inclined to be sceptical about some, if not all, of the "facts” they read, especially if they are "official."

So much so, that the "Daily News” on November 28th referred to the numerous letters received by all the newspapers, asking if the bulletins about the King’s illness were genuine or whether something was being kept back. The "Daily News,” as usual a little pompous, informed its readers in heavy black type as follows:—

“The Daily News"—speaking with high authority—feels it a duty to say, and to emphasise, that the bulletins published about the King’s health are statements of fact 'and that nothing has been kept back.

Subsequently we were told of the anxiety which the King’s condition had given rise to in these early weeks, and it appears that what the "Daily News” felt it a duty not only "to say,” but also ”to emphasise,” was one of those "statements of fact ” like the war-time "victories” which were more costly than defeats and were almost invariably followed by "withdrawals”  "according to plan.”

Patriotism and Profit.
The ‘‘Daily Mail,” so solicitous for everything British and so anxious to preserve British industry and provide work and wages for British workers, remarks that—

increasing numbers of British investors and speculators are seeking investment opportunities abroad, and particularly across the Atlantic. ("Daily Mail,” 27 November, 1928.)

Knowing the Britishness and integrity of the "Daily Mail,” you will expect, as a matter of course, that the Editor will denounce this investment of British money in American industries and will particularly express his abhorrence of speculators. On the contrary he announces that—

each day we shall publish . . . a concise review . . . of the investment situation in New York, with helpful hints as to American and Canadian securities from the British investor’s point of view.

The National Income.
Sir Josiah Stamp and Professor Bowley ("The National Income”) have shown that the total real national income in 1924 was approximately the same as in 1911, or, in other words, the value of the wealth produced (including incomes from abroad) had increased by the same percentage as prices. As population had in the meantime increased slightly, this meant that the total purchasing power per head of the population was slightly less than in 1911.

The national income is now definitely increasing again. Mr. G. D. Rokeling has recently conducted a further enquiry for the "Economist.” It is published under the title, "A British Index of National Prosperity, 1920-1927,” with a commendatory Introduction by Sir Josiah Stamp. (Published by the "Economist.” 2s. 6d.)

In it Mr. Rokeling estimates (page 31) that the real national income has increased between 1920 and 1927 by about 8 per cent. The increase between 1924 and 1927 is 6.7 per cent. After allowing for the increase in population, this gives an increase per head of the population of 5.3 per cent, between 1924 and 1927. The “Economist” (October 6th, 1928) considers that this estimated increase is probably slightly less than the actual increase.
Edgar Hardcastle
Posted by Imposs1904 at 7:38 AM